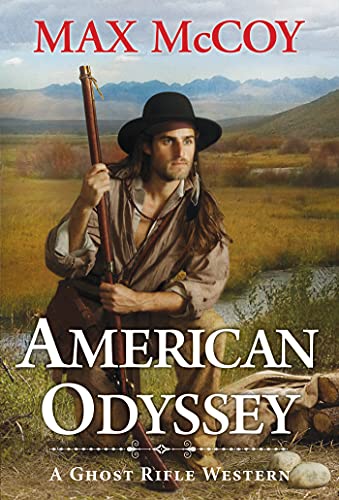 “A tale of bravery and adventure, of ironic hair-breadth near misses between the main characters, filled with the expectation that the next paragraph may bring about a denouement that will resolve all questions.”

Jack Picaro, apprentice gunsmith turned fugitive, has settled in the Wyoming Wild River Range. He is now married to an Arikara woman Sky, and they are expecting their first child.

“Twelve years ago, when he made his retreat to this spot, he vowed to leave behind the past, buried with the unreachable dead.”

Abruptly, three events disrupt Jack’s life. He finds a wolf gnawing on a human hand. Two Dutch missionaries are murdered, and Jack and Sky take in Hawk, a Flathead boy who survived the massacre.

“‘Strange how things work out,’ Jack said. ‘For fourteen months I’ve been wanting to talk to a human being other than my wife and I encounter three of them in one day.’”

When soldiers come to Jack’s cabin, asking assistance in finding missing troops, he reluctantly agrees in spite of Sky’s resistance.

Jack will find the missing men, and meet a woman claiming to be granddaughter of explorer George Rogers Clark. He will enter a dream world where he’ll again fight the warrior Standing Wolf, and he’ll discover his Ghost Rifle, the weapon he created and thought he lost, retrieved from the waters of the Mississippi.

“A rifle shot echoed from the hills. The report had a clear, bell-like quality.”

When Jack returns to his cabin, he finds the house has been burned to the ground. Among the ashes are Sky’s and Hawk’s bodies. Now homeless, and bereft of his woman and child, he unwittingly takes the second step in the journey started 13 years before.

While Jack is being buffeted by fate and unknowingly ushered toward that final confrontation, other lives are also being manipulated. At a farm outside St. Louis, twins Augustus and April are mistreated by the couple to whom they are servants.

When April is bitten by a rattlesnake, she is treated by Eury, a Black woman who admits knowing her real parents. She tells April about Abelle Rapaille and her family’s indentured servant, Jacques Aguirre, and how Jacques ran away, not knowing his beloved Abelle was carrying his twins.

“‘If our mother had family, why didn’t they take us in?’

‘They were ashamed,’ Eury said. ‘They did not want you. They sold you, in the old way, as babies.’’’

When Granger molests April, she stabs him, and she and her brother run away. They are discovered by Hamlin, a conman who sees the potential in the two, and they make money, working on the steamboats going up and down the river.

Surprisingly, a good many people they meet have heard of their father, now going by the name Jack Picaro.

A falling out with Hamlin separates the twins from their mentor.

“‘Life is absurd,’ she blurted.

‘You mean life has no meaning?’

‘It would be better if it had no meaning,’ April shrieked. ‘it is worse than meaningless. It has a meaning and that meaning is a burlesque.’”

April’s disillusionment with life sends Gus off on his own. Determined to find and kill their father, whom he blames for their misfortunes, he unknowingly follows the same road Jack has also taken.

“Jack Picaro would not know it for many years, but the day the aspens turned to gold on the side of the mountains beside the lodge would be the last happy day of his life.”

Readers will recognize immediately that a story beginning with foretelling in such a lyrical and descriptive language will either end with a gigantic Happily Ever After, or an even greater tragedy.

Written in an oddly formal-sounding dialogue reminiscent of the conversations in True Grit, American Odyssey is a tale of bravery and adventure, of ironic hair-breadth near misses between the main characters, filled with the expectation that the next paragraph may bring about a denouement that will resolve all questions but perhaps not bring the expected satisfaction.

Since American Odyssey is the second entry in the Ghost Rifle trilogy though there are many tragedies, but also some moments of great happiness. The end hasn’t yet been reached, but the suggestion of what is to come will whet the reader’s imagination and send them clamoring for the rest of the tale.

Because the reader is more or less dropped into the middle of the story, it’s highly suggested that the first novel, The Ghost Rifle, be read in conjunction, for there’s no doubt that after finishing both, the third story, The California Trail, will be eagerly awaited.

Patterned after Homer’s epic, Jack Picaro, as its Odysseus, and the dramatis personae he meets on his journey, are as monumentally heroic in their own way as those in any Greek chronicle.