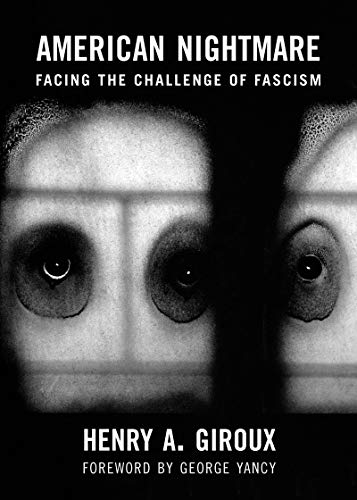 “a highly articulate demolition of the Trump agenda, which comprehensively and briskly covers the many high crimes and propaganda tactics of an avowedly plutocratic, authoritarian administration.”

As one of the greatest dissidents and public intellectuals of our time, Henry Giroux continues to excoriate the declining state of US politics and civic life in this new work. As an academic and leader in the field of critical pedagogy, Giroux is an expert on the United States’ descent into unrestrained economic neoliberalism and political authoritarianism, which he now correctly claims is converging into neo-fascism with the election of Donald Trump.

In this work, Giroux comprehensively documents the Trump regime’s anti-democratic trappings, yet he wisely focuses these proto-fascist tendencies within the framework of US history and political culture. Still, most of the material here documents the changes in US policy since Trump’s election, which while stomach-churning and nauseating, can get repetitive for avid news junkies who have already heard many of these scandals and pay close attention to current events.

Most interesting are Giroux’s forays early in the book at describing the Orwellian character of Trump and his administration, which, as he notes:

“Dynastic politics, official lying, and militant nationalism all occur openly under Donald Trump’s rule. Democracy is under attack. Americans are expected not to behave as empowered citizens, but as obedient subjects and grateful consumers who should repeat slogans and cheer for the supreme leader no matter what. This is the brave new surveillance/punishing state that merges Orwell’s Big Brother with Huxley’s mind-altering modes of entertainment, education, and propaganda.”

The middle portion of American Nightmare continues with a tour-de-force exposing the Trump regime for the cruel and plutocratic grifters that they are: Giroux documents the increasing military budget, Trump encouraging police brutality, lowering taxes on the rich, demonizing minorities, slashing budgets for social services, ignoring the plight of Puerto Ricans, and many more hideous policies of the administration.

What sets Giroux apart from many political commentators is his obvious erudition, unflinching critical perspective, and global analysis of the perils of neoliberal ideology and its infiltration into education, the media, and society. Giroux writes with flair and has his own unique style, as devout readers of his books and online columns at outlets such as Counterpunch, Truthout, Alternet, and Salon well know. Some may find some passages in this book long-winded or repetitive, and less-favorable readers might even say turgid, but the importance of his arguments cannot be denied.

Giroux brings American Nightmare to a close by imagining his concepts of a “Politics of Ungovernability” and “Democracy in Exile.” Giroux draws on the serious scholarship of people like Nancy Fraser, Michael Lerner, David Harvey, and many others. Giroux asks:

“In a world in which there is an increasing abandonment of egalitarian and democratic impulses and the erasure of historical memory, what will it take to educate young people and the broader polity to learn from the past and understand the present in order to challenge rabid, unbridled authority and hold power accountable?”

Giroux cites important intellectuals and activists such as Timothy Synder, Geoge Lakoff, Robin D. G. Kelley and more, yet his analysis of what a democracy in exile would look like in the US is thin. As he notes, “Young people, workers, and those now considered disposable, especially, are the driving forces of the future, and we have to learn from them, support them, contribute where possible, and join in their struggles.”

He continues: “This would suggest building up unions again and putting their control in the hands of workers, fostering the conditions for the creation of a massive student movement, and working to build sanctuary cities and institutions that would protect…immigrants, Muslims, Blacks, and others considered disposable.” Practical , detailed advice is hard to come by here, as progressives have been repeating these mantras ad nausea for decades.

Giroux is perceptive regarding the lack of vision among the activist and progressive Left. He accepts how:

“For many progressives, their political landscape lacks connections to . . . single issue movements . . . they exist in a fractured political environment that impedes a broader ethical and radical movement to harness the energies of progressives, liberals, and leftists under one political tent and to fight for a comprehensive politics in the name of a radical democracy or form of democratic socialism.”

He goes on to suggest US citizens can learn from the anti-war movement of the ’60s, the lives and work of Martin Luther King Jr., Vaclav Havel, the Black Panthers, and even Spain’s Podemos. No doubt these examples are inspirational, but acceptance of these radical ideas and thinkers has always been in a small minority in the US.

This reviewer would suggest Giroux is somewhat overly optimistic regarding the short-term future of the US. Giroux claims: “Despite everything, optimism and resistance are in the air, and the urgency of mass action has a renewed relevance.” Although public polling does indicate that citizens tend to endorse policies to the left of mainstream Democrats, we still live in a nation full of false consciousness that elected Reagan, George W. Bush, and Trump.

For further thought, since Giroux mentions his sincere and welcome support for an authentic democratic socialism, we should reflect on the two most prominent in the US today: Bernie Sanders and Alexandria Ocasio-Cortez. While we must leave the door somewhat open regarding various policy positions of Ocasio-Cortez, we should be mindful that they are both mild social democrats and tack to the right of FDR or even Eisenhower, center-left in today’s European context, and both have limited knowledge of, and have equivocated on deadly serious foreign policy issues. Ultimately, capitalism finds a way to tolerate, co-opt, make palatable, and market “outsider radicals” for its own ends, similar to how Carter and Obama were framed as progressive reformers trying to fight the system from within.

Here is another salient point to consider. Giroux writes that: “Couple [Trump’s] political interventions with the unprecedented attack on the media and the barring of the New York Times, CNN, and other ‘fake news’ media outlets from press conferences and what becomes clear is that the professional institutions that make democracy possible are not only under siege but face the threat of being abolished.” Giroux continues: “Trumpists’ constant cry of ‘fake news’ to discredit critical media outlets is part of a massive disinformation campaign . . .”

Well, yes, Trump is a disinfo specialist extraordinaire. Yet is Giroux implying that the NYT and CNN “make democracy possible” and can honestly be considered “critical media outlets”? These are exactly the outlets, along with obvious hate-spewing right-wing media like Fox News and others, which provide the backdrop of an ahistorical “Disney dreamscape” that Giroux mentions in the text.

This began in the Cold War under the CIA program “Operation Mockingbird” and there is no reason to believe it has stopped. All of the mainstream media outlets are part of a “massive disinformation campaign” and Giroux should have made that clearer, as he is well aware of the media’s complicity. All of the above outlets should be condemned for distracting, hypnotizing, brainwashing the historical memory and general sense of empathy and humanity of US citizens. If radical democracy is to spring up in the US, Giroux should be more cognizant and recognize that capitalist, intelligence agency-penetrated media has no place in its future.

Overall, this work is a highly articulate demolition of the Trump agenda, which comprehensively and briskly covers the many high crimes and propaganda tactics of an avowedly plutocratic, authoritarian administration.