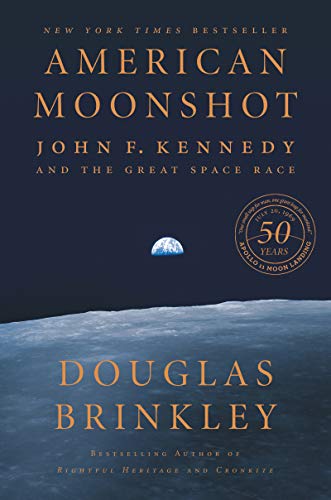 “If one man can be said to have gotten Americans to the moon, it was definitely John F. Kennedy . . .”

“If we can put a man on the moon, why can’t we . . .” This phrase has become an American idiom since July 20, 1969, when Neil Armstrong stepped out of the Apollo 11 Lunar Module and took humans’ first steps on our nearest galactic neighbor. The 1960s Apollo space program represents the zenith of big budget national priority government programs—that rare combination of government, industry, academia, and national support to accomplish seemingly impossible goals.

In this new book on the origins of NASA and the American manned space program, historian Douglas Brinkley uses carefully interwoven biographies to describe the confluence of people and events that set America on the path to Tranquility Base.

At the center of the book is President John F. Kennedy, the ardent champion of spaceflight for both practical and political purposes. Interweaving Kennedy’s early years with the pioneering rocketry research done by the American Robert Goddard, Brinkley lays out how the scientific and world events of the early 20th century paved the way for the rise of spaceflight. Noting efforts by the Germans and Soviets prior to World War II also showed that rapid advances in aerospace technology were being sought worldwide, something that would personally affect Kennedy as the United States entered the war.

World War II had a profound effect on Kennedy, not only because of his war service, but because his older brother Joe died on a secret mission to destroy a suspected German rocket launching facility in France in 1944. Although Kennedy would not learn all the details of the last flight of his brother until he became president, the loss of his brother not only catapulted him into politics, it helped shape his view that the United States must lead in aerospace technology and achievement.

World War II also influenced the course of another key contributor Brinkley follows through the book, Werner von Braun, the self-promoting chameleon-like German who built the V-2 rocket for Hitler and then moon rockets for the United States. Von Braun gets short shrift from Brinkley, who holds him complicit in the use of slave labor for the V-2 production lines, the same rockets that would cause thousands of civilian casualties in Britain and other allied countries.

However, like many German scientists with dubious Nazi pedigrees, von Braun was basically brought to the U.S. as a prisoner of war, becoming an American citizen in the 1950s as the beneficiary of the rapidly escalating Cold War that allowed the army to whitewash the Nazi connection of the rocketeers as they started building missiles for the U.S. Army.

After the war, as von Braun worked for the army, Kennedy became the quintessential Cold Warrior, and Brinkley does an excellent job of showing Kennedy’s political maturation from congressman to senator to president. As a Senator, JFK fixated on a “missile gap” and lack of enthusiasm for a missile or space race with the Soviets from the Eisenhower Administration. As Brinkley notes, JFK hit an almost fever pitch as the Soviets bested American in launching a satellite into space, and he was determined as president to leapfrog over the Soviets in space achievement.

The entire book leads up to this moment early in his administration—the process by which Kennedy decided on a manned moon landing program to best the Soviets in space and establish American technological, economic, and diplomatic dominance for space achievement in the Cold War.

Brinkley does a masterful job of showing how Kennedy’s idealism, Cold War mentality, and political savvy combine to pledge the U.S. to a moon landing in his historical speech of May 25, 1961. As Brinkley shows, Kennedy was not just a visionary but a politician who was reeling from the Bay of Pigs fiasco, a simmering problem in West Berlin that threatened open conflict, and the humiliation of the Soviets putting a man in space first.

But Kennedy was also a smart politician, and he used his Democratic Party allies, especially Vice President Lyndon Johnson and key senators to ensure the space program was fully funded. His savvy choice to head NASA, James Webb, was a veteran bureaucrat who knew how to spread the budgetary largesse around to as many states and congressional districts as possible—a key feature in any big government effort—as NASA said, “No bucks, no Buck Rogers.”

Brinkley’s admiration for JFK is boundless, and the steady hand and enthusiasm of the president is evident during those crucial early years of NASA. His last trip to the Cape Canaveral launch complex to be briefed on the Saturn rocket program by von Braun was only a few days before his assassination.

Fortunately, LBJ shared his enthusiasm, and NASA continued to receive the funding and support needed to meet JFKs goal with five months to spare. Unfortunately, the succeeding Nixon Administration did not share the same enthusiasm for manned spaceflight, and NASA began its gradual decline from the best and brightest can-do organization to just another government bureaucracy.

Today the biggest advances in space technology are nearly all driven by private companies and this may be JFKs finest legacy: the development of space for peaceful scientific and commercial purposes. If one man can be said to have gotten Americans to the moon, it was definitely John F. Kennedy, and this new book brings out the full story of that fateful pledge to “land a man on the moon and return him safely to the Earth.”