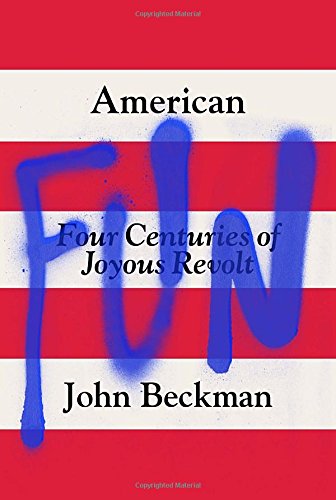 “. . . with modern permutations of American fun, American Fun: Four Centuries of Joyous Revolt offers a history that is about fun and is fun to read. It illuminates the very American tradition of stickin' it to the man, dancin' in the street, and havin' a blast.”

Mr. Beckman, an associate professor of English at the U.S. Naval Academy, has a specific set of activities in mind when he uses the word fun. He explains what fun is not. Entertainment is a form of comodified amusement. Leisure is a more passive variation of fun. Pleasure is explicitly associated with sensuality and self-enjoyment. He defines fun as acts that are both joyous and rebellious.

The most fun can be had when the stakes are high. The link between fun and rebellion gets traced by the Ma-Re Mount, a colony founded by Thomas Morton, with its revolt against the dour, joyless, theocratic tyranny of William Bradford's Plymouth Colony.

Mr. Beckman traces the history of American fun to three main cultural tributaries: the Gilded Age, the Jazz Age, and the Sixties. While the Boston Tea Party and the Yippies feature prominently, Mr. Beckman asserts “Much of the best American fun doesn't aim to be political.” Nothing is less fun than scrolling through a Facebook news feed or enduring the continuous shrilling of Facebook friends whipped into a frenzy of smug self-righteousness. Unlike the artificial choreography and silver-tongued rhetoric of political parties, American fun is spontaneous, occasionally vulgar, and high energy.

The variety of examples illustrated within this history show a very different history from the one pounded into impressionable skulls. And far more interesting. The conflict between Ma-Re Mount and Plymouth Colony will be recognizable to anyone who has enjoyed the John Landis cinema classic Animal House.

But American Fun is not all fun. Race, slavery, and class play important roles in how Americans have fun. America's tortured history of race is seen in examples like the African-American Pinkster celebration and blackface minstrelry. For slaves, these celebrations were a means of preserving their culture and breaking the shackles of oppressive industriousness. Like his predecessor William Bradford, Frederick Douglass took a dour view of this non-industrious, impious revelry. But Douglass had a point, since the concept of emancipation also became associated with the concept of respectability. The Pinkster celebrations seemed to reaffirm Douglass's fear that African-Americans would be considered uncouth savages who only seem to expend energy when they are having fun.

As with many other histories and cultural analyses, Mr. Beckworth sets things in opposition. On the one side are propriety, piety, and industry and on the other are fun, rebellion, and joy. When the stakes are high and the pressure is on, Americans have a resilience and inventiveness when it comes to having fun. In the Gold Rush, Forty-niners would form homosocial bonds due to lack of womenfolk and an abundance of alcohol.

In its more politicized form American fun becomes manifest in pranks and satire. The Yippie movement and Abbie Hoffman get extensive treatment. Among Hoffman's memorable pranks included throwing money on the floor of the Wall Street stock exchange and running Pigasus as a presidential candidate. While not as utilitarian as signing a petition or lecturing people on the detrimental effects of Agent Orange, these pranks still brought attention to the atrocities and excesses of American foreign policy and the actions (or inaction) of necrotic white men in both major political parties. At least Abbie Hoffman made street theater interesting.

In the end, with modern permutations of American fun, American Fun: Four Centuries of Joyous Revolt offers a history that is about fun and is fun to read. It illuminates the very American tradition of stickin' it to the man, dancin' in the street, and havin' a blast.