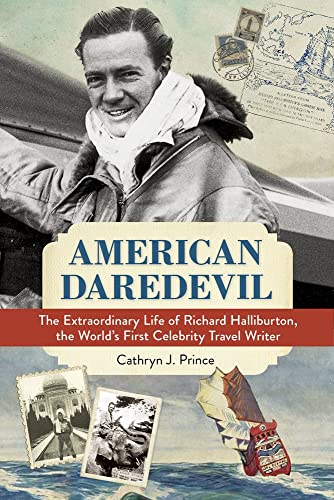 Richard Halliburton was a dashing American traveler, adventurer, and author, partly remembered today for being the first to swim the length of the Panama Canal and paying the lowest toll in its history—36 cents.

Halliburton was headline news for most of his brief career. Criss-crossing the globe in the 1920s and ’30s, he climbed mountains, retraced the trail of Spanish conquistador Cortez in South America, and flew around the world in an open cockpit plane shooting the first aerial photos of Mr. Everest.

“Daring Dick,” as he was called, became a sensation with the publication of his first book, The Royal Road to Romance. Seven more books about his thrilling (and often embellished) travel adventures would follow and the press responded wildly to his matinee-idol looks and freewheeling lifestyle. But the fascinating story here is how hard Halliburton worked to polish his image as a macho trailblazer and hide his homosexuality.

Journalist and author Cathryn Prince has done a very thorough job researching “Romantic Richard” Halliburton, the story of his personal struggles, and why he chose to escape a traditional career and lifestyle. She tells his story in compelling detail and, like its subject, it is never boring. His life reads somewhat like a man free falling without a parachute or Icarus flying a bit close to the sun.

Prince relates many exotic and fascinating yarns about the eccentricities of the young Halliburton.  How in Tehran he treated the 17-year-old Prince Ghazi of Iraq to his first plane ride. Then, wrapped in thick sheepskin overcoats, Halliburton was attracted to the city’s bazaars. “On a whim he bought a nightingale . . . ‘The first nightingale ever to ride on an airplane, I’m sure,’ he wrote home. The nightingale did not survive the trip.’’

In 1925 Halliburton scaled the barren peak of Mt. Olympus and spent the night there. He called it a “Taj Mahalish night alone in the Parthenon. Never was anything so divine, so alone—human, so chastely perfect as those haggard ruins.”

Halliburton lost all his money in the 1929 stock market crash, but that did not deter him from promoting endless expeditions and adventures, hitting the lecture circuit, and writing his many books. Piecing together his letters, interviews, magazine articles, and books, the author tells us how he managed it all: “his knack for connecting with people,” his “romancing the road,” “fancy for danger,” “the inveterate collector of souvenirs,” his “determination to wring as much from life as possible,” his enthusiasm for his audience “to feel what he had felt,” and how he “navigated the complicated waters of his personal life.”

In London, for example, in 1931, he “ate on King James table and slept in Queen Elizabeth’s—all very cold and dreary.” He rode elephants, shot blowpipes, lived with French legionnaires, consorted with dangerous primitive tribes, interviewed the Russian who claimed to who have shot the Romanov family, all grist for the Halliburton books.

Yet he seemed also to be a man of habits, also, “Halliburton did his best to balance work and rest. He kept to a daily schedule of sunbathing for two hours every morning and then a full afternoon of writing and researching.”

Perhaps his most ambitious escapade was buying a plane called The Magic Carpet and taking a dicey and dangerous vagabond journey around the world on it. After 40,000 miles and endless European, African, Middle East, India, and East Indies incidents, they were almost taken down by a swarm of locusts. The long and pioneering ordeal produced a book, The Flying Carpet, that would net over $100,000, heady money in those days.

While “Handsome Halliburton” inspired millions with his derring-do and thrilling daredevil exploits during an era of the Great Depression and looming war, established writers like Hemingway and Fitzgerald labeled him a poseur. Yet his devoted followers were legion: by 1928 he was delivering 50 talks a month. By 1929 he was dead—lost to a typhoon while sailing a replica Chinese junk across the Pacific.

The author says it best in her elegiac closing words, “For thirty-nine years Richard Halliburton sought the kind of immortality enjoyed by the literary heroes of his childhood, but the dream he had chased for so long died with him. The tragedy lay not in his dying young, but rather in his fading glory.”

Still and all, Halliburton’s optimistic, giddy place in history is secure: he remains the first adventure journalist, the first real celebrity travel writer, an inspiration for generations of travel writers to come. Sadly, he is all but forgotten today.