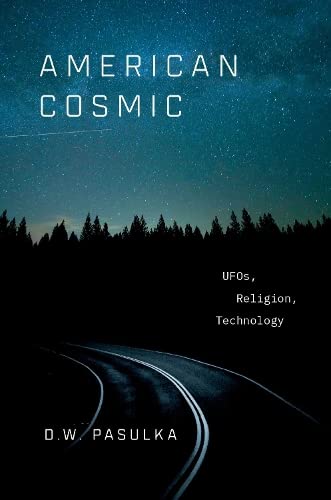 “While Pasulka’s theory joining religion, technology, and UFOs should not be discounted, it is at times a difficult read, and may put off the reader who is not totally convinced.”

D. W. Pasulka, in her new book American Cosmic: UFOs, Religion, and Technology, takes three seemingly different areas of interest and folds them together to discuss their relationship to one another in current, worldly beliefs.

American Cosmic is at times difficult for the average reader to understand. It frequently takes the shape of a doctoral thesis—an academic dissertation waiting for its final argument.

For those persons who firmly believe in the existence of extraterrestrials, this book will be fascinating and will confirm their beliefs. For the non-believer, it may be a bit more of a stretch to change that belief, but having said that it should be noted that Pasulka makes interesting arguments to tie religion, UFOs, and technology together.

To solidify her theory, Pasulka documents her research and meetings with others she considers experts in the world of UFO existence. These she refers to as experiencers, “people who have sighted UFOs or believe they have seen extraterrestrials.” She associates their experiences as similar to “the same things I had observed in my research in Catholic history . . .” and thus begins the connection between UFOs and religion when “experiencers interpreted these as spiritual or religious events.”

Taking her theory one step further, Pasulka describes, “What was once a belief localized within small pockets or groups of believers under the umbrella the ‘UFO religions’ is now a widespread worldview that is supercharged by the digital infrastructure that spreads messages and beliefs ‘virally.’” And now technology becomes the third leg on the stool.

Pasulka’s journey begins with a “journey to the desert” where she and her research partner, James Master, join Tyler on a visit to the site of a “Phenomenon.” Throughout the book, the word phenomenon is used to describe a UFO sighting or experience.

Interestingly, both Pasulka and Master were required to wear facemasks when taken to this location, presumably to prevent them from truly knowing the whereabouts of this phenomenon. Curious. And here Tyler “explained that his connection to off-planet intelligence helps him create biotechnologies.” Another connection with technology and another new term—off-planet (OP)—used to describe extraterrestrials and how their craft work. Curious.

Pasulka references many individuals to make her case. One in particular, Jacques Vallee, discussed three aspects of this topic: “the physical, represented by Tyler; the testimonial, represented by the experiencers; and the social . . . how belief in the phenomenon persists regardless of . . . any verifiable evidence to support it.”

To take the technology a step further, she refers to Vallee’s theory that “the UFO might not be an object, but some kind of ‘window’ into another dimension.”

It is these references that would make her argument compelling to the nonbelievers she wishes to convince. She sought answers also through her own studies. “The Bible and records from Catholic history and other religious histories are replete with accounts of such events . . .” as random sightings, aerial phenomena, and “beams of light” sightings.

In chapter six, Pasulka focuses on the “Human Receiver”—that is, the experiencer. Again she refers to Vallee who she says, “discovered there are two types of UFO reports . . . those reported to ‘authorities’ and those . . . revealed to sympathetic listeners.” The events discussed in this chapter are interesting, but raise the question if they go far enough to convince the unconvinced. She nonetheless makes a good argument.

Pasulka ends her book with a discussion of the real and the imaginary, and here she again brings religion into the conversation as she describes her visit to the Vatican Secret Archives and the Vatican Observatory. It was during this visit that she reacquainted herself with one Maria of Agreda, a cloistered Spanish nun of the 17th century. She compares Maria’s experiences with those of Tyler and how they relate to the phenomenon as experiencers.

As a professor of religious studies, Pasulka did not enter this discussion as a believer, but as she processed all of the arguments presented to her, she learned to consider all of the material she encountered. Her personal decision about the relationship between the three entities discussed is clear. “I have made the case that belief in extraterrestrials and UFOs constitutes a new form of religion.” Furthermore, through her research, she has decided: “I know we are not alone, there is something here; what does it want? Is it studying us? I don’t know. But it is here; there is no doubt in my mind.”

American Cosmic is an intriguing book that lays bare an enormous amount of research to prove a point. While Pasulka’s theory joining religion, technology, and UFOs should not be discounted, it is at times a difficult read, and may put off the reader who is not totally convinced.