American Cornball: A Laffopedic Guide to the Formerly Funny 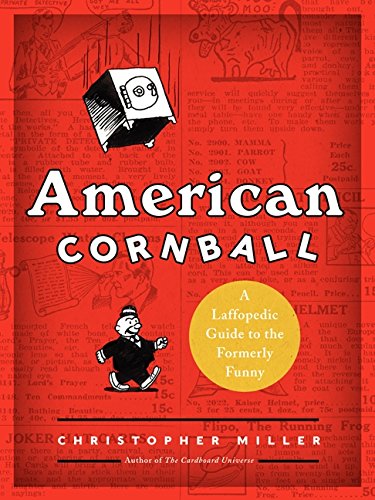 “This is an archeological dig into the American mindset.”

There are a couple of things that no one can figure out. One of them is love. Another one is what makes people laugh. You can come close to understanding why each happens, but no matter how carefully you take them apart, each just disappears under close examination.

But you can trace how each one happens, how each one rises to the surface of a public or personal consciousness. When you do that both love and humor become history. Their paths become linear, you can follow them as occurrences.

Take the trajectory of love for instance.

Sammy loves Sue. She rejects him and he becomes depressed. Lives in a hole in the ground for the rest of his life. That’s the story of Sammy. That’s just history. But we don’t know why Sammy loves Sue and, chances are that he doesn’t know either. What happened has become history.

By the same logic understanding why an anvil hitting a coyote or duck is funny is just as impossible. But through devoted research you can approximate when the joke began to take shape and enter the public arena.

This process of historical examination (with a touch of dissection) is at the heart of American Cornball: A Laffopedic Guide to the Formerly Funny. This is an archeological dig into the American mindset.

Each story or topic is carefully researched and thought out along the guidelines of when the joke first became public and how it became funny. What Mr. Miller uncovers reveals our foibles, prejudices, sexist attitudes, insensitivity to others, our over-sensitivity regarding ourselves, and ultimately how much we have changed since 1900.

Using postcards, vaudeville routines, comic strips, comedians, film, pulps, valentines, gossip, and social trends, Christopher Miller takes a semi-serious look at much of what has made us laugh since the turn of the century.

Limiting his overview to the first two-thirds of the 20th century reminds us how ephemeral and subjective humor truly is. It also reminds us that humor can often fail to transcend its origin after a generation passes. Many of the ideas and jokes that he looks at are definitely of their time. Still, some retain their nerve even through today.

In the case of the aforementioned anvil Mr. Miller looks back to find that, until the arrival of Chuck Jones at the animation department of Warner Brothers, spotting an anvil in a cartoon was quite rare.

Once Mr. Jones assumed the reigns at the studio, anvils (along with their close cousins in danger, the massive piano, the 20 ton barbell, and safes) began appearing with relative regularity in Road Runner, Bugs Bunny, and other cartoons.

Today the anvil in a cartoon is funny because we understand it to be. Before Mr. Jones reveals his love for massive weights crushing poor animals, there is little in history to tell us why anvils are funny.

In some cases a joke begins in one form, changes, disappears and then reappears in a completely unrelated version of the original. Take a look at Little Audrey. Those who are alive today and remember the name probably associate the name with the Harvey Comic Books or Paramount cartoons.

But looking backward, Little Audrey seems to have begun as a series of jokes about a little girl who laughs at others for their stupidity when she is actually the one who hasn’t got a clue.  As a joke it dates back to around the late 1920s.

The catch phrase in the thousands of documented jokes is “Little Audrey laughed and laughed.” However, the comic book character is actually based on Little Lulu. Mr. Miller states that the new incarnation has become a . . . “recycling of folklore, not just a substitute for it.”

Copyright lawyers began to realize where some money was. As the jokes and songs move through society and generations, they reshape, reform and morph into something new.

Each of the nearly two hundred sections is devoted to a topic that somehow became a source of humor. Some of the subjects are obvious. Farts, fat men, the rich, outhouses, rumps, blondes, and plumbers will always be great sources for humor. In these cases it becomes more about what jokes were being told and at what time.

But at one time in our collective past, someone in America was laughing at nearly every one of them.

Mr. Miller takes the rise and fall of these sensitive subjects apart with an understanding that the topics are difficult to view in hindsight, but they should still be examined as history.  You just can’t ignore this part of American history.

The title includes a good number of illustrations and photos that support Mr. Miller’s look at humor. It is fascinating to discover how much of what entered the public mindset came from newspaper comic strip, advertisements, magazine illustrations or postcards.

After a few subjects pass by, you begin to realize the importance that art, in all its manifestations, once held in the American eye. Today, good or bad, the flashing lights of TV, iPads, and cell phones have changed our relationship to what influences us.

But when a book includes Bill Holman, Smokey Stover, epitaphs, and quotes from W. C. Fields, you absolutely have to turn everything else off and read. Mr. Miller beautifully describes a million laughs and as he does shows us more about America than we may care to see.