American Cipher: Bowe Bergdahl and the U.S. Tragedy in Afghanistan 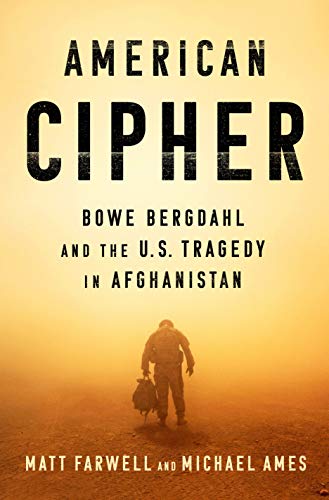 When US Army Private Bowe Bergdahl went outside the wire of his military basecamp in Afghanistan in 2009, and wandered around to talk to the enemy, he was within hours captured by the Taliban. When his platoon leaders discovered he had gone missing it triggered DUSTWUN missions to rescue him.

What happened and why Bergdahl wandered away from his platoon and the political firestorm it caused during his five years as a POW are the subjects of American Cipher, a searing account of the circumstances and events by journalists Matt Farwell, an Afghan war veteran, whose articles have appeared in the New York Times, and Michael Ames, journalist for many publications including Newsweek.

All during his capture, while Bergdahl’s hometown of Hailey Idaho kept vigil, his parents did everything to secure his freedom; meanwhile in the eyes of many within the military, fellow soldiers and eventually politicians were circulating another version of the capture saying that Bowe Bergdahl deserted his company and was a traitor who had gone over to the other side.

The most damning accusations against Bergdahl were that because of his disappearance, US soldiers were injured and killed on the patrols sent out on missions to rescue him in Afghanistan, when,  as Farwell and Ames reveal, US intelligence that knew within 48 hours of his disappearance Bergdahl was being held hostage in Pakistan—at the time officially a US ally.

It is an inside look at the US military dysfunctional and adversarial chain of command, with some high profile officers who used his disappearance in Afghanistan for their own strategic purposes, using Bergdahl’s rescue as an excuse.

US intel knew that Bowe was being tortured by his captors and suffering inhuman conditions including being starved. Bowe, in fact, had attempted two escapes and his torturers became even more brutal. Yet in staged hostage videos released by the Taliban, Bowe’s parents knew that he was sending them coded information about where he was being held.

His capture became political football when factions in the right-wing media spread the rumors that he had in fact converted to the Taliban, become a Muslim, and was having a ball in captivity playing soccer with his terrorist captors.

Bergdahl’s parents were not getting answers from the military or non-military US government officials. When his father found out that the Pentagon paid off operatives to quickly return another hostage in Pakistan, something he was told was impossible, he was rightly infuriated and not only went public but also traveled to Pakistan to plead for his son’s life.

Bowe was released on May 31, 2014, as part of a prisoner exchange for five Taliban members held at Guantanamo Bay, who were already slated for release. The exchange though touched off a further backlash against Bowe Bergdahl and President Obama, who brokered the deal, was summarily criticized for the deal.

His hometown of Hailey, Idaho, kept vigil for him during his capture and prepared to give Bowe a hero’s welcome, which was canceled because the family and friends were now the targets of death threats from Americans. Meanwhile, Bergdahl was facing court-martial which could have put him in prison for life.

The official line was that he was now converted to the Taliban. Without any verifiable information everyone from Michael Flynn and Donald Trump to Fox News mouthpieces did everything to assassinate Bowe’s character and motives.

The Army’s subsequent investigations concluded that none of the six deaths on patrols were connected to Bergdahl deserting his company. That did not, however, vindicate him in the eyes of the American public.

Bergdahl grew up a dutiful son in rural Idaho in a religious and tight-knit family.   He was quiet and often ostracized at school and was internalizing the social problems he was having in the community and even within the family unit. He eventually started to rebel, skipping church, not joining his father on hunting trips, and escaping alone on his bike to camp in remote areas.

As rebellious as Bowe was becoming, he possessed many of the values that his parents had nurtured in him. He was loyal and hardworking, largely naive about the world.

His deployment to Afghanistan was problematic from the start. He had previously been discharged from the Coast Guard after a short enlistment. He had a history of questioning authority to the point of disillusionment about America’s war in Afghanistan. In Afghanistan, he became more isolated and commented on the absurdities the war, incompetence of some of the Army officers on his base, specifically, the way they were treating the Afghan people.

Farwell and Ames go a long way toward correcting the record in investigating all aspects of this complex episode in the US quagmire of US military involvement in Afghanistan. At the heart of American Cipher is an American tragedy of the troubled soldier and his ability to survive in the fog of an endless war.