America in the World: A History of U.S. Diplomacy and Foreign Policy 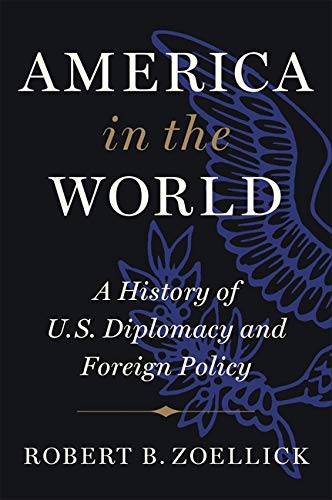 Here is a book that will make your chest heavy with regret for what has been lost but also buoyant with hope that a brighter future can be achieved. This is what a reader may feel from engaging this masterful and quite readable summary and analysis of U.S. foreign policy from the 1770s through the early 1990s. The detailed stories cover the times from America’s first diplomat, Benjamin Franklin, to those of President George H. W. Bush, with brief allusions to later developments under Presidents Bill Clinton, George W. Bush, Barack Obama, and Donald Trump.

It is the details—the traits, interactions, dilemmas, and decisions of key individuals--that create both the depth and the interest in the 442 pages making up the first 17 chapters. The 30 pages of the 18th and final chapter distill some of the lessons that emerge from the histories of U.S. diplomacy up to the beginning of the 21st century. All this is topped off with 51 pages of references.

Zoellick writes like a serious historian but has worked in government under six presidents. He has consulted a bevy of first-rate histories and official documents for each chapter. He has read them with the analytical mind of a practitioner and colleague of many leading figures, including George H. W. Bush and his secretary of state, James Baker.

Having participated in arms control negotiations with the USSR helps him to frame Zoellick’s discussion of similar issues facing U.S. and other diplomats at the Washington conference in 1921–1922 that limited capital ships. Having supervised the U.S. participation in negotiations on climate change, Zoellick knows the pushes and pulls of carbon lobbies and green constituencies. Having been a trade negotiator and president of the World Bank, Zoellick knows intimately the ins and outs of the global political economy. He is now a Senior Fellow at  Harvard’s Belfer Center for Science and International Affairs where he contributes to the “Applied History” project.

What can make your chest heavy are Zoellick’s narratives about America’s first diplomat, Benjamin Franklin (in London as well as Paris); the architect of American power, Alexander Hamilton; the White House futurist, Thomas Jefferson; the pragmatic unionists, Abraham Lincoln and William Seward. The president famous for carrying a big stick, Theodore Roosevelt, was also a balancer of power who won the Nobel Peace Prize for mediating the Russo-Japanese war. Zoellick tells us how Charles Evans Hughes persuaded five disputatious powers to accept limits on their battleships and on their actions in the Far East; how Elihu Root labored to strengthen international law; how Cordell Hull promoted free trade; how George C. Marshall put together the European Recovery Plan; and how—decades later—Ronald Reagan and George W. H. Bush helped to halt the Cold War without Armageddon.

The United States has benefitted from farsighted diplomacy in recent years, for example, John Kerry’s nuclear accord with Iran in 2015 joining the United States, Russia, China, France, the United Kingdom, and Germany. Except for fostering the recent Israel-United Arab Emirates accord, the Trump administration has stood out for its rejection of international agreements.

The biggest gap in U.S. politics is the Enlightenment trust in science and its capacity to elevate the human condition. We know that Franklin and Jefferson shared this vision. So, in his way, did Theodore Roosevelt. Franklin Roosevelt and Harry Truman were not men of science, but they were open to the wisdom and practical suggestions of the best minds. Zoellick details the role of Vannevar Bush, whom he calls “Inventor of the Future.” FDR came to trust this MIT scientist and holder of many patents and let him supervise not only the Manhattan Project but the labs that enhanced radar and cryptography.

In 1944 FDR asked Bush, “What’s going to happen to science after the war?” Bush replied with a paper entitled, “Science, the Endless Frontier.” It called for governmental funding of basic research in peacetime—in partnership with universities  and industry—to discover the a “largely unexplored hinterland” of science. Bush wrote that “scientific progress is one essential key to our security as a nation, to our better health, to more jobs, to a higher standard of living, and our cultural progress.” His views led to creation of the National Science Foundation and the construction  of a military-industrial-academic network  that gave the United States an unmatched technological edge in world affairs.

Read Zoellick to learn how Bush continued the Enlightenment quests of Franklin and Jefferson. But then  reflect on the outlook of President Donald Trump and the Republican politicians who have embraced him  Trump is not open to any idea or fact except as it may bolster his political or financial interests. His “know-nothing” perspective is shared by nearly 40% of the voting public. Trump’s rejection of serious science has kept the United States from containing Covid-19 and thus is responsible for a large share of the death toll (now approaching 200,000) from the virus—not counting all those in Brazil and elsewhere infected by Trump’s pronouncements.

Even before Covid-19 struck, the Trump and GOP were defunding all science and culture except for military R&D, even as they offered more subsidies to polluters.

Why then should anyone who reads this book feel hope? There are people in Congress—from old guard Senator Edward Markey to newcomers such as Representative Alexandria Ocasio-Cortez—who are trying to mobilize and fund science to produce a Green New Deal, a program that would address not only climate change but also economic inequality and racial justice. They are not “rocket scientists” but, like FDR, want to hear from the best minds and make their ideas actionable.

The great minds are still there, but have not been harnessed to government. The great universities are still great, but need to be mobilized—not ostracized. There may be another Vannevar Bush out there, perhaps in Seattle, Silicon Valley North Carolina’s Research Triangle, or Interstate 495 encircling Boston. But he or she will remain on the periphery unless sought out and engaged by an enlightened president.