Around America to Win the Vote: Two Suffragists, a Kitten, and 10,000 Miles 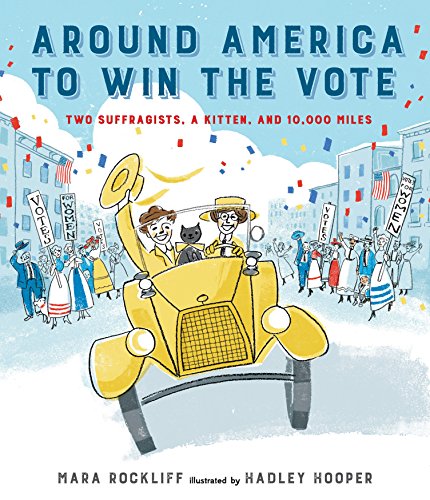 In author Mara Rockliff’s enchanting new picture book Around America to Win the Vote: Two Suffragists, a Kitten, and 10,000 Miles, it’s April, 1916—a presidential election year—and two rambunctious and courageous women named Nell Richardson and Alice Burke leave New York City in a little yellow runabout motor car to make a 10,000-mile trip across America to hustle up support for women to be allowed to vote. They take with them those items they believe are the most crucial: a typewriter, a sewing machine, some tools and spare parts, a trunk with some “useful” things like dresses in it, and a little black kitten with a yellow ribbon around its neck.

Along the way, Nell and Alice give speeches, brave blinding blizzards, dodge bullets, and attend fancy vote-raising parties. If anyone challenges them by asking why they aren’t at home doing woman’s work, they prove they have brains by typing a clever poem or sewing a fancy apron in front of anyone who wants to watch. This, they declare, proves that women can do it all; they can do woman’s work and they can do man’s work, too.

As the two friends travel, their trusty yellow car gets stuck in streams, sinks into the mud, chug-a-lugs through puddles, collects dust, and eventually brings them and the souvenirs they have collected all the way back to their starting place in New York City in September 1916.

This enchanting story of two dainty and untried women driving across America alone is a perfect example of the true spirit of American adventure. Around America to Win the Vote is proof for early readers that girls and women are not limited by their sex; they can and do accomplish the same thing (and more!) as their male counterparts. It also offers a glimpse of the American landscape of yesteryear as well as a close-up view of the mindset of the time.

Rockliff’s prose is energetic and chock full of giggle-inspiring prose. Artist Hadley Hooper’s illustrations are a celebration of life. The smiling, sometimes awestruck faces of the people Nell and Alice met, the curious and unspoiled beauty of the early American landscape, and the bright and hopeful yellow of the trustworthy runabout that is splashed across every oversized page are all a feast for a picture book lover’s eyes.