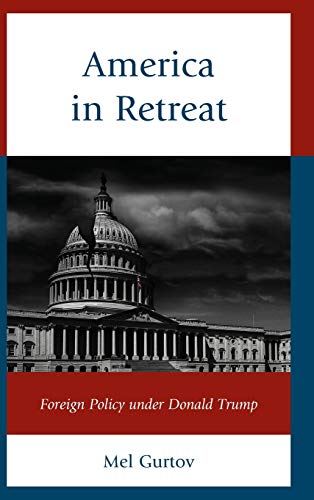 This compact but wide-ranging book provides an authoritative analysis of America’s retreat from the world under President Donald Trump. The book will help the reader understand  why, under President Trump, respect for and trust in the United States have plummeted in most of the world—including in long-standing U.S. allies such as Germany. The downward trend is documented by frequent surveys by the Pew Research Center, which also show that many nations fear the United States more than they like Trump and his country.

Many details in this story will be familiar to readers of what Trump calls “fake news”—the major newspapers and other media that work to uncover and report the truth about the United States and the world. Indeed, Gurtov dedicates his book to “a Free Press.” But Gurtov sifts the news for the most important materials and organizes the parts so they begin to join in an organically linked whole—in short, a kind of order from near chaos.

The news reports are couched in a larger framework provided by books such as Seth Abramson, Proof of Collusion: How Trump Betrayed America (2018) and David Enrich, Dark Towers: Deutsche Bank, Donald Trump, and the Epic Tale of Destruction (2020), and documents such as those released by the White House and Department of Defense. (References take up 70 of this book’s 203 pages.)

Gurtov proceeds from the perspective of a lifetime spent analyzing world affairs, with particular emphasis on China and the United States. Gurtov is now Professor Emeritus of Political Science at Portland State University and Senior Editor at the journal Asian Perspective. In a previous incarnation, he was an analyst at the RAND Corporation, then funded mainly by the U.S. Air Force.

Gurtov provides case studies of U.S. policy toward China, Russia, North Korea, Europe, and the Middle East. He investigates China’s rise, America’s many wars, human rights, authoritarian leadership, and nuclear weapons. He finds that Trump is a nationalist and illiberal populist whose policy views have been molded chiefly by his business practices, leading to an obsession with “winning,” the elevation of ego and loyalty over expertise, and heavy reliance on threats and a deep disdain for professional diplomacy.

Gurtov concludes that Trump has no strategic plan, but he has an agenda: stop subsidizing defense costs for others; start winning in trade; curb immigration; promote economic nationalism; limit international commitments; drop any concern for human rights and global cooperation. Some of these attitudes are hangovers from the unipolar hubris that followed the Soviet collapse in 1991. But Trump has carried them to new extremes that harm not only America’s image but its bargaining power and credibility.

Of course domestic and foreign relations intertwine. Lying and violating norms and laws at home carry over into Trump’s dealings with the world. The man’s notorious disregard for science also nurtures distrust of him and U.S. policy in global affairs.

The dysfunctions of U.S. politics will weigh heavily on the next president. American democracy is not about to collapse, but it is in grave danger. Would a Joe Biden foreign policy be any different? It might well continue to prioritize military spending and arms sales abroad. Biden would probably embrace U.S. exceptionalism and might be inclined to foreign interventions.

A truly progressive policy would shift gears. It would reduce the defense budget and invest the savings to pay for social needs that bear on human security. The environment and public health would be seen as national security challenges. Free trade would be revisited to make sure that agreements foster well-being at home and abroad. The privileged position of multinational corporations would be reduced by removing their tax advantages. Immigration policy would be liberalized and bolstered by aid to Central American countries to improve life there. A Green New Deal would take shape.

Gurtov argues for human-interest priorities and values and for rejecting a foreign policy of neglect and ineptness when it comes to climate change and other major issues of our times. These and other ideas in this book are discussed in the author’s blog, In the Human Interest.