As Always, Julia: The Letters of Julia Child and Avis DeVoto 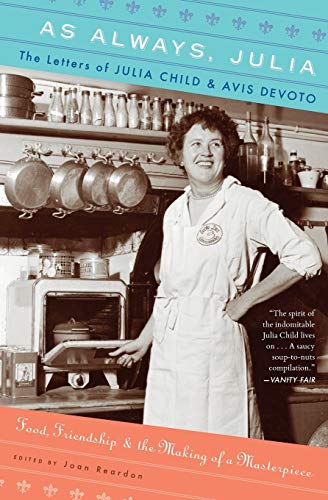 When Julia Child died in 2004 her devoted and ardent fans mourned her as if they had just lost a beloved friend. Many of us instinctively took out our well-worn copies of Mastering the Art of French Cooking and prepared a meal in her honor. In New York, there was a rumor running around town that all the fish mongers had sold out of sole owing to all the cooks who wanted to make sole meunière in remembrance of Child’s first meal on French soil back in 1948.

She may no longer be with us, but since her death a steady stream of books and the popular and delightful 2009 film, Julie and Julia, starring Meryl Streep make it feel as if she is. As a result, Julia Child’s popularity is stronger than ever and our desire to know more about her seems insatiable.

With the release of As Always, Julia: The Letters of Julia Child & Avis DeVoto, Joan Reardon, an award-winning culinary historian and food writer, has lifted the veil to show us Julia Child as she actually was during the nearly 10 years it took to write and publish Mastering the Art of French Cooking.

More than just a series of letters, As Always, Julia is a terrific read that can be enjoyed on many different levels. Under the skillful editing of Reardon, it reads like a memoir tracing the arc of Mastering the Art of French Cooking from inception to completion. It is often laugh-out-loud funny and even though you know how it all ends, the uncertainty over whether or not the book will ever get published keeps you turning the pages like a good thriller. (And when Julia does finally get the word that it will be published, well, let’s just say you better have a box of tissues near by.)

First, for those who don’t know, Avis DeVoto was Julia Child’s pen pal, adviser, and confidante during Child’s years abroad and was without question the woman behind the scenes who made sure that Mastering the Art of French Cooking got published.

Their relationship began through a correspondence over kitchen knives in 1952 when Avis replied to a letter that Julia wrote to Avis’ husband, the author and historian, Bernard DeVoto, who had written a magazine piece on the sorry state of American kitchen knives. The two hit it off immediately and their correspondence grew into a life-long friendship.

Avis was connected to the publishing world through her husband and was the first to recognize that even in its infancy, Mastering the Art of French Cooking would become a classic.

After trying out a few early recipes at home, Avis wrote to Julia in 1953, “Honest to God, Julia, you have brought a revolution into this household. I wholly expect the completed book to cause a real revolution.” Based on her enthusiasm, Avis introduced Child and her co-authors to Houghton Mifflin and after they ultimately rejected the final manuscript it was Avis, again, who shopped it to Knopf who then published it in 1961.

Throughout the ups and downs on the way to publishing Mastering the Art of French Cooking, Avis DeVoto was a constant cheerleader and editorial adviser. She believed unconditionally in both Julia Child and her vision for the book.

When Child received news that Houghton Mifflin had decided not to publish the book, Avis wrote to her, “You have come nearer to mastering a good many aspects of cooking than anyone except a handful of great chefs, and some day it will pay off. I know it will. You will just have to go on working, and teaching, and getting around, and spreading the gospel until it does. The alternative, that Americans do not give a damn about fine food and refuse to learn how to make it, is one I simply refuse to face.” We should all be so lucky as to have a friend like Avis.

Most people will want to read these letters because of their interest in Julia Child, but Avis DeVoto was a real wit, and in many ways, is the star of this book. Living in the shadow of her famous husband, you can’t help wondering if she had been born after the Women’s Movement had taken hold, she probably would have become quite successful in her own right.

She wrote letters that went on for pages, and many parts could have been re-worked as stand-alone essays. Her diatribe to Julia in 1953 letter about the deteriorating standards in American home cooking (an opinion shared by Child) is one example:

“But what really makes me want to stand up and cheer, and at the same time fills me with a wild new hope, is what you say about the servant problem. Nobody can cook as she wants to, lovingly, while coping with children, housecleaning and all that. Food is what suffers first—and that’s why we depend more and more on sliced bread, frozen foods, pressure cookers. I can’t wait to see what you do about casseroles. Dorothy [Child’s first editor at Houghton Mifflin] and I discussed that subject with great heat. There isn’t one casserole in a hundred that is fit to eat. But because everybody wants to sit around and drink cocktails in a convivial fashion, and because the cook doesn’t want to miss the fun, nine times out of ten we wind up with a casserole. (Not me, God forbid—I find that a rump roast of beef can wait just as well.) Dorothy says she ducks invitations to dine with young married people because she can’t, at her age, take the casserole any more—she described one composed of pork chops and canned Bing cherries, after which she came home and was sick.”

As for Julia Child, her letters reveal her to be every inch the person she presented to the public. It is always a bit tricky to look closely at someone whose work we have admired from afar. Sometimes the person as they really are, warts and all, is a big disappointment and can irrevocably alter our opinion of him or her.

In this case, however, Julia Child shows her true self to be more endearing than ever. She is witty, hard working, determined, opinionated and sometimes suffers from self-doubt just like the rest of us. Oh, and she can’t stand the Republicans.

Fair warning—these letters are as much about 1950s politics as they are about her struggles writing the cookbook. If you are a Republican, you may want to skip this book, because both Avis DeVoto and Julia Child exchange many choice words about Republicans that could just as well have been written yesterday as 50 or 60 years ago. After Kennedy defeated Nixon in the 1960 presidential election, Julia wrote to Avis, “And one thing which always amazes me is the way the Republicans really believe their own propaganda, such as that there shall be vast inflation, wild spending, etc. etc., and socialism, and labor dictators.” Sound familiar?

Politics aside, what is really remarkable in reading these letters is realizing that over her entire career Julia Child’s original vision for the book and her philosophy about teaching and cooking never wavered. From the very beginning, Child set out to write a cookbook like no other: first, to demystify French cooking and make it accessible to the servant-less American home cook.

Second, as the title of the book implies, raise the level of French home cooking to an art form. And finally, to provide detailed, foolproof instructions emphasizing technique above all else so that even a novice could succeed.

This was all revolutionary at the time, and when the final manuscript went to Knopf and her editors went home to try out some recipes, they were delighted and astounded at how easy it was to turn out a real French dish. It’s how everyone feels the first time they cook from it and it is why, even today, Mastering the Art of French Cooking is one of the best cookbooks ever written, French or otherwise.

Avis DeVoto saw this immediately, and if it were not for her dogged support, we might never have had a chance to experience it for ourselves. So let’s all pull out our copies of Mastering the Art of French Cooking and this time, let’s make a meal in honor of Avis.