Alt-America: The Rise of the Radical Right in the Age of Trump 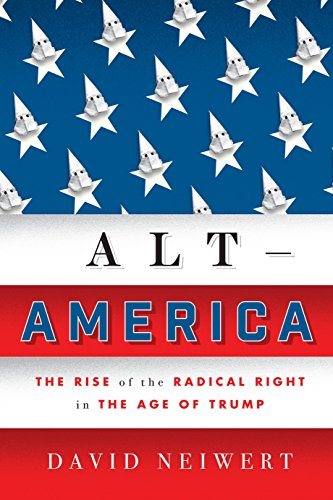 How did a racist, anti-intellectual, anti-science orientation win control of the White House in 2017? Neiwert’s Alt-America goes far toward explaining how the same country that leads the world in science and technology could elect Donald Trump president and how roughly  two out of five voters endorsed—at least in his first year as president—his tweets and policy choices.

Neiwert has studied what is now called the alternative right for some two decades. For Neiwert the alt-right is the radical right—violent, paranoid, racist, hateful. Marginal influences on U.S. politics in the Clinton, Bush, and Obama years, they rose to exert a major force in 2016–2017.

There are many sub-groups  among ultra conservatives—“Patriots,” Tea Party supporters, Oath Keepers, xenophobes, Klansmen, skinheads, Christian  Identity adherents, and neo-Nazis. What has glued them together is racism—hatred of Barack Obama and anything he represents or champions, coupled with white supremacy as tribal identity. A second unifier is a virulent hostility to any kind of gun control.

The alt-right has been nourished by right-wing media and nearly ignored by mainstream media. The business-establishment right joined with the extremist right to oppose a president who was not only black but also liberal.

Neiwert studies extremist right web sites and voices on Fox News to show how Donald Trump uses the alt-right and how the movement uses him. He inspired and legitimized what until then was a demoralized and divided movement. They in turn seized this opportunity to come boldly out of the shadows—their ranks fortified with fresh recruits. They now see themselves as a decisive constituency in the upcoming Republican primaries.

Citing research by the Southern Poverty Law Center, Neiwert tracks the ups and downs of memberships in far right groups. The number of hate crimes and hate groups started to rise in 2008 (when Obama was elected). The SPLC  counted 1,360 active Patriot groups in 2012–2013 and 873 other hate groups including anti-gay and anti-Muslim coalitions.  But the number of such groups declined in 2013–2015. The evidence suggested that radicals were shifting their activity from organizations to online media.

Updating Neiwert, Michelle Chen reported in The Nation (March  24, 2017)  that the SPLC has found that the number of hate groups in the United States rose for a second year in a row in 2016 as the radical right was energized by the candidacy of Donald Trump. The number of explicitly anti-Muslim groups has nearly tripled since 2015 alone, to over 100 nationwide. There has also been a spike in reported incidents of “hate” violence, including harassment and physical assault, alongside rising anti-Muslim hostile behavior and bullying in schools. Of nearly 1,100 “bias incidents,” SPLC reports, “37 percent of them directly referenced either President-elect Trump, his campaign slogans, or his infamous remarks about sexual assault.”

Neiwert describes in detail the components of alt-America but does not analyze the sources of their motivation except to hint at shady character. He notes that some prominent figures have been jailed for felonies—one for raping his seven-year old daughter.

Neiwert probably knows about the precedents of alt-right activity, but he begins his story around 2001. He says nothing about the intolerance of whites to Indians, blacks, and Chinese; the crazy fanaticism in the Salem witch trials; the self-righteous ways of the Know-Nothings, or the anti-Semitic and pro-Fascist rhetoric of America Firsters in the 1930s. He points to cases involving the Christian Identity movement and some outliers of Mormonism, but he does not point to the elephant in the room: the us-versus-them attitudes of many Protestants and Catholics. The fringe movement Christian Identity elevates white supremacy and separatism to a Godly ideal—what Nicolle Nichols called the “ideological fuel that fires much of the activity of the racist far right.”

A lesser elephant is the indifference of many Americans to historical and current reality. Even the four-star general attempting to establish a semblance of order in the White House continued the nearly official mix of lies and pernicious distortions.

On April 19, 2009, “Patriot’s Day,” so-called Oath Keepers used the Lexington, Massachusetts, commons to enlist members and commit them to a ten-part pledge. Several hundred active duty and retired military, policemen, and firemen  swore they would never “disarm” their compatriots. Marked as a “blue state,” Massachusetts ranked third in anti-Semitic acts in 2016.

Neiwert borrows from social science to compare alt-America with Fascism. Like Mussolini and Hitler, Trump and far right media practice the Big Lie. Indifference to truth is fatal for democracy. Is Trump a Fascist? He uses eliminationist rhetoric against non-whites. He is ultra-nationalist. He disdains the principles of establishment conservatism as well as those of  liberalism. Liberals, he says, have made America a “laughingstock.” He acts the victim even as he embodies the concept of a lone male leader. He worships power and dislikes people who are disabled or who were captured.

On the other hand, he has no ideology except narcissism and, as of 2017, no armed militia to attack his foes. Nor does he call for a totalitarian one-party state. By exploiting the strands of right-wing populism, however, he has strengthened a number of proto-fascist groups, buttressing conditions that could lead to real fascism.

How should liberals cope with these dangers? Niewert suggests that liberals should get out of their comfortable shells and engage with poor whites and others in the alt-right.  Each side should try to understand the other side.  But he admits that if you offer your hand to a fanatic, it may be broken off and devoured.  Is it possible to compromise on whether to attack a non-white or a non-Christian? Does Elmer Stewart Rhodes, the founder of the Oath Keepers,  need more education? He boasts a law degree from Yale. Breitbart boss Steve Bannon has master’s degrees from the Harvard Business School as well as in security studies from Georgetown. It is doubtful that a sharing of information  or a walk together in the woods would alter the perspectives of such persons.

Another serious book on the same topic is George Hawley, Making Sense of the Far Right, which stresses the youthful and techno-savvy character of many participants in the alt-right.

Both Niewert and Hawley perfom a public service  by challenging the myth that “it can’t happen here.” Philip Roth has already suggested how it could in The Plot Against America (Vintage, 2004).