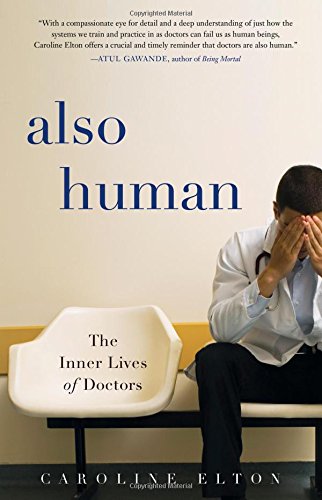 Also Human is a book about medical doctors. Carolyn Elton, a vocational psychologist with two decades of experience working in medical settings with physicians, sums up her findings in the epilogue: “Taken together, doctors’ psychological needs are denied, ignored, not thought about. Unmet.”

Is that it? It is a lot. But does that give us enough of an explanation for the publicly visible troubles among doctors today, including the high-profile suicides we read about, too often? For problems with depression, anxiety, and substance use that are common among physicians? Dr. Elton’s summary explains a lot, but not enough. More about that below.

Dr. Eaton (PhD) has counseled countless British medical students, registrars (residents and fellows in the US) and practicing physicians. She has delivered a gamut of care from career counseling to crisis intervention, including moments where suicide might be an outcome. Her knowledge is intimate and refined from experience.

The chapters range from training to the transition to practice, often a tumultuous time; to trying to balance work and life (the former usually getting the lion’s share); to the emotional and ethical kaleidoscope of being a doctor; to the exceptional performance demands that the practice of medicine puts on doctors; to changing medical specialties or getting out of clinical work entirely; to doctors being patients themselves; to race; to erotic feelings; to doctors who want to take their own lives; to the still rudimentary efforts to reduce stress and enhance coping among doctors; for many, crushing debt; and much more.

Each chapter is built around the stories of a handful of doctors, different in each chapter, whom Elton has known or worked with. The clinical material is so abundant, the details so substantial, one finds oneself too often in the weeds. One doctor after another, then another, etc. Less would have been more.

Her evidence for the great stresses impacting students and practitioners of medicine is abundant—from her case examples and from her considerable exposure to the writings and reports on this subject. The effect of persistent stress has widely been called “burnout,” but what does that mean? Elton does not get caught up in that popular term, which does little to truly explain what is going on, and why. But as powerful as are the forces swirling around doctors today, it is not enough to explain what appears to be orders of magnitude greater distress than when I was in training or a young doctor.

Two other factors bear noting that may help us see more: the person entering the profession and the times, which are a changing.

While the technology my classmates and I had to work with as well as the labs and imaging were far more limited than today, the overwhelming experience of facing life and death, and being the one supposed to prevent the latter, was no different. Nor was the feeling of being over one’s head, hardly prepared for the next patient problem, which was right around the corner, and with usually no one senior around to help. Or of being a woman, when there were far fewer in every entering class than there are today. Or of harboring resentment to the patient(s) who was (were) the straw that broke our weary back (what Dr. James Groves called the “hateful patient” in his 1978 NEJM classic). Nor were the hours any shorter, the food any better, the sleeping quarters any nicer. Yet the turmoil Dr. Elton so finely describes was not as evident, seldom spilling over the top and into public discourse.

One difference is the “set,” the psychological interior, that today’s crop of doctors bring to medical school, residency, and practice. These are people, ironically, who have led lives that were way over scheduled. There were great expectations placed upon them from an early age to “compete” successfully in primary and secondary school, and in the graduate studies that followed. They had their days loaded, sometimes overloaded, with soccer, lacrosse, baseball, piano or violin lessons, ballet, voice coaching, and of course grinding exam prep courses.

But what about those who were not already mostly spent, if you will, when they entered medical training? Maybe there was more margin as a result? No way to prove that thesis, but something is different today. We need to examine the world of doctors beyond just a cross-sectional approach, which this book tends to take. We need to consider how the road to medical school may be very different today, and at risk to wear out the very best before they can perform their very best.

A second factor that bears consideration is the reigning culture. We are in an era of the self, a focus more on ourselves than others, which might oversensitive a person to the tribulations of a calling, a life serving others.

There is also the short attention span that technology has bred; the growing intolerance of any pain, as if life might not have that baked in—pain both mental and physical; a deepening fragmentation among families; as well as the relative absence of community and a growing loss of faith. Doctors don’t exist in a vacuum: they (we) breathe the same air and feel the same societal turmoil as anyone else. Perhaps this is another explanation for why doctors today seem to be suffering more than their predecessors.

Enlightened medical settings are now promoting meditation, mindfulness, exercise, a healthy diet, and even sleep for those amid the pressure cooker of clinical care. These mind-body interventions can quiet an overcharged adrenergic system and diminish the oversupply of the stress hormone, cortisol. Invaluable techniques, but at this point already late in the development of distress and emotional disorder. Accessible and quality mental health services for doctors are essential and can be life-saving. But they too are after entering the fiery crucible of medicine. Where are the ounces of prevention?

Reading Also Human in the wake of two women in New York, one a medical student the other a resident, having taken their lives in the space of five days, is illuminating. Truly dark days for everyone involved or watching on, wondering about their lives, and about the rarefied world of medicine. We don’t need more proof than these two losses, and too many more, to recognize that doctors are “also human.”

We know the lives of doctors are beset with troubles. But they are not “also human”; rather, they are simply human, just like the rest of us.  We need to do better to ease up on their early lives. We need to make living, not just performing, a central tenet of the profession they have chosen. That’s good medicine.

Lloyd Sederer, MD, is Medical Editor for Mental Health for The Huffington Post, Adjunct Professor at the Columbia/Mailman School of Public Health, and Chief Medical Officer for the NYS Office of Mental Health. The opinions expressed here are entirely his own.