Alpha One Sixteen: A Combat Infantryman's Year in Vietnam 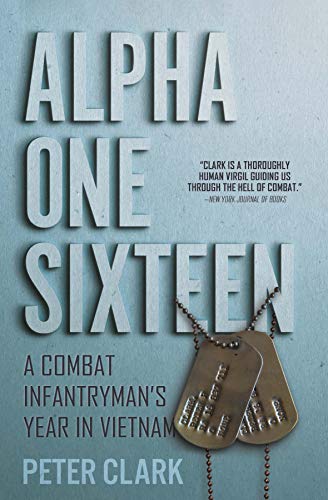 When the first major contingent of conventional U.S. ground forces landed in South Vietnam in 1965, the American public was told that the war, which had been raging in Southeast Asia ever since the end of World War II, would not be a long one. Memories of the Korean War, which saw some 300,000 American casualties and an inconclusive finish, was still fresh in the minds of many voters, and most of them did not want their sons to fight a protracted ground war in Asia.

By 1966, the “home by Christmas” idea has been shattered. The Viet Cong and their allies in North Vietnamese Army showed no signs of defeat when Private First Class Peter Clark of Illinois landed in-country. Unlike a lot of troopers who found themselves in the jungles of Vietnam, Clark was not a conscript but a volunteer. He said his oath of enlistment in 1965 after a few perfunctory years of college in the Pacific Northwest. By his own confession, Clark was an aimless youth without goals or ambitions, but did have a healthy appreciation for marijuana.

Within a year, Clark had been transformed into a battle-hardened veteran of Alpha Company, 16th Infantry Regiment, 1st Infantry Division. Between the summers of 1966 and 1967, PFC (later Sergeant) Clark pounded the bush and humped a radio for the “Old Man,” a tough-as-leather Special Forces officer named Captain Howley.

As Holwey’s RTO (Radio Telephone Operator), Clark would experience several VC ambushes, firefights, and several major operations all along Highway 13 in the Republic of South Vietnam. During his last major battle, Clark managed to phone in several artillery barrages and bomb drops that kept an entire squad from being wiped out by a VC ambush. This action eventually earned Clark the Bronze Star with a “V” for valor.

Alpha One Sixteen is Clark’s thrilling and fast-paced memoir of his year-long stint in South Vietnam. Battle scenes do not make up the majority of this volume. Rather, Clark focuses on the daily grind of combat. Readers get to see Clark struggle to find a pair of jungle boots, clash head-on with lackluster NCOs, and enjoy a night with a Japanese prostitute in Tokyo.

Despite occasional moments when Clark admits that he was no fan of the government in Saigon or the upper echelons of the American military, Alpha One Sixteen shows that he came to love life in the infantry and considered the men of Alpha and Bravo companies as family.

Clark is a thoroughly human Virgil guiding us through the hell of combat. His prose is stripped down, and most of the chapters in this book are less than ten pages. Alpha One Sixteen is decidedly not a big history about the major battles and operations of the Vietnam War. Instead, it is a grunt’s view of the war—its internal politics, the beauty of Vietnamese countryside and women, and horror of seeing too many mangled corpses.

Alpha One Sixteen is a great and necessary addition to the canon of Vietnam War memoirs. It may be hard to believe, but the days are numbered for America’s surviving Vietnam War veterans. Like their fellow warriors of America’s many conflicts, the memories of Vietnam veterans like Peter Clark need to be heard, studied, and appreciated. Clark and his fellow men of the 16th Infantry Regiment have earned the right to be read by a new generation of Americans.