The Allure of Battle: A History of How Wars Have Been Won and Lost 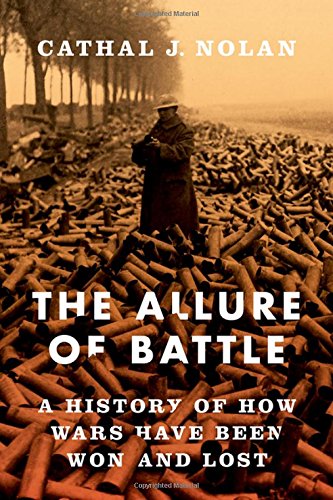 “seeks to overturn long held canon among military historians about the conduct and role of battles in warfare . . .”

“Military history is hard history perhaps precisely because it seems so easy.” This sentence begins one of the most stimulating and controversial books on military history in a long time.

Continuing the tradition of Oxford University Press to publish timely and thought provoking books on military history and strategy, the volume argues that the notion of the “decisive battle,” long an obsession of military historians, is, instead, a canard that prevents a more detailed and useful study of military history.

The author makes a very compelling case that clashes labeled “decisive battles” by military historians are often much less pivotal than they seem, and misleading to understanding not only the eventual winner of a particular war, but a larger comprehension of war and conflict within the context of strategy, politics, and the humanity of war.

Using examples such as Cannae, Austerlitz, and the German encirclement victories on the Russian steppes in 1941, Nolan points out that these battles, as decisive as they were on a tactical level over their opponents, did not achieve lasting strategic victory for Hannibal, Napoleon, or Hitler.

Instead, with very few exceptions, such as the Prussian victories over the Danes in 1864, Austrians in 1866, and the French in 1870, very few wars have had decisive battlefield victories that led to quick and successful political and strategic results.  Even these wars, the author notes, were understood by the Prussian commander von Moltke as unique conflicts fought under particular circumstances that would likely never be repeated.

Unfortunately, most conflicts, such as the two world wars that followed, have ended up being drawn out wars of attrition where the country or alliances that have been able to muster greater resources and continue the conflict have tended to outlast their opponents, even if they could not always defeat them on the battlefield.

Nolan asserts that waging defensive war via attrition has proved more decisive in determining the outcome of wars and that the not only the notion of the decisive battle, but the idea of the “great captain” or “military genius” should be less of a dogma among military historians.

From a historical perspective, his arguments are compelling and well laid out. The typical themes prescribed to by military historians—the contest between firepower and maneuver, the debate between offensive versus defensive strategies, the role of strategic planning and tactical acumen—are all addressed, some with more disdain than others, but he does a thorough effort to leave no stone unturned and no facet of military history ignored to advance and defend his thesis.

Some readers may not agree with his conclusions, but his thesis is clear, well defended, and thought provoking. Moreover, he offers a number of cautionary conclusions that military professionals should know, the most significant being that war is a fundamentally human endeavor and can never be decided solely by a perfect strategy or impeccable plan no matter how much technology has changed the conduct of war.

Humans are limitless adapters and no matter how fast technology changes, combatants can find ways to defeat or degrade even the most advanced capabilities of their opponents. Even if one side is far stronger militarily than the other, a desire to resist and accept casualties by the weaker power can often achieve a military stalemate, which usually benefits the defender. This is a painful lesson recently learned by the U.S. in both Iraq and Afghanistan, conflicts that began with decisive military victories that soon bogged down into prolonged insurgencies and an indeterminate political and strategic outcome.

Challenging, well written, well-sourced, and dense with material, this book seeks to overturn long held canon among military historians about the conduct and role of battles in warfare. The reader will have to determine the author’s success in defending his thesis and may disagree with some conclusions, but there is a great deal of food for thought for military historians and professionals in this volume.