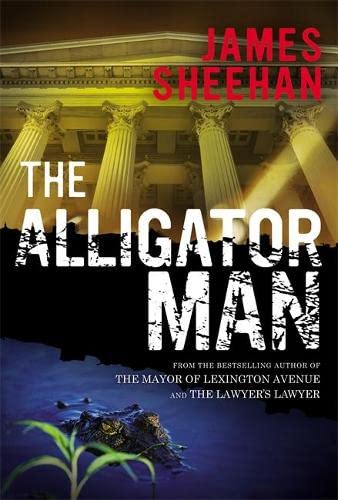 The Alligator Man is an enthralling legal thriller set in Florida.

Roy Johnson is the former CEO of Dynatron, a major international energy company. He is also a lush.

When Dynatron stock prices tumbled and the company slid into bankruptcy, over twenty thousand of its employees lost everything. Their pension savings had all been in Dynatron stock. Long before the collapse, Roy Johnson abandoned his staff and cashed out of the company with a very large sum of money.

While the former employees lost jobs, homes, health insurance, and their retirement, Roy Johnson sat unconcerned on his hundred million dollar payout and got drunk. Then he’d take a walk with his bottle down Gladestown Road.

When Johnson’s wife reports him missing, auxiliary police officer Carlisle Buchanan investigates. For a man with bodyguards, the disappearance of Gladestown’s most renowned resident is considered strange. Plenty of people wanted to see the demise of Roy Johnson.

Carlisle finds pieces of what appear to be Johnson’s clothing in the swamp near his home. It’s believed Johnson was murdered and his body devoured by alligators, which earns him the nickname The Alligator Man.

In the opening chapters, we are introduced to several of the main players in the book. At times, the point of view tends to whip back and forth between the characters, though it easy to figure out whose point of view we are in. In places the dialogue is a little wooden, most notably between the criminal lawyer, Kevin Wylie and his girlfriend, Susan Bishop when we are first introduced to them in chapter three.

Yet the setting and the location are instantly exciting. With the big-time corporate crook, the million-dollar payout, and the aggrieved employees, we have the elements of a great thriller already in place. The pace is quick and the chapters are short.

Billy Fuller is one of the wronged employees, perhaps with more motive than most to murder his former boss. He is also the childhood friend of Kevin Wylie.

Kevin is a criminal lawyer with integrity; unable to represent those whose innocence he does not believe in. Unhappy representing drug dealers and working for the Stang law firm, an argument with his boss leads him to quit.

At the same time, he learns of his father’s cancer surgery and poor chance for survival. Kevin has not spoken to his father, the well-known trial lawyer Tom Wylie, for 28 years and decides to pay him a visit.

While in St. Albans, Kevin discovers Billy Fuller is the prime suspect in Johnson’s murder. Kevin believes Billy is innocent. With his father by his side, he represents Billy in a battle for his life. This is where the story really opens up.

The author’s experience as a former practicing trial lawyer shines in The Alligator Man. The trial is gripping and loaded with tension. The courtroom scenes and the interaction between the prosecution, the defense, and the judge are so well written, the reader feels they are an integral part of it. Mr. Sheehan treats us to a rare and fascinating glimpse behind the scenes where we get to witness jury selection, and hear the legal discussions at the bench or in the judge’s chambers.

As the trial heats up, Kevin Wylie is faced with his own personal struggles, including the failure of his relationship with Susan and the reality of his father’s health. Mr. Sheehan has created multilayered and personable characters we care about. The humanity, acceptance, and personal salvation we see unfolding in Kevin’s personal story are the perfect counter balance to the courtroom drama and the corporate corruption.

The Alligator Man is an enthralling legal thriller.