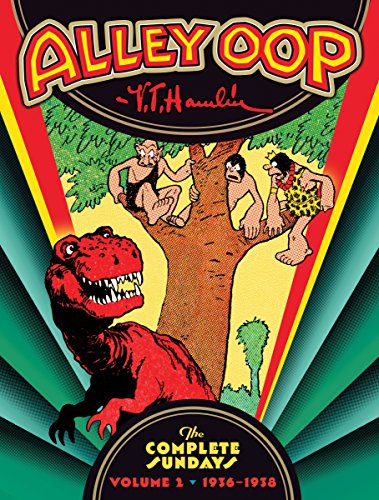 “Working with historian and curator Russ Cochran, Dark Horse has created a beautiful book to introduce the world of Alley Oop to everyone.”

Filled with wild cavemen who ride pterodactyls, snarling dinosaurs, women conducting environmental protests, and sleazy promoters working every angle at a prize fight, an Alley Oop Sunday page is a wonder to behold.

The world that Oop’s artist and creator V. T. Hamlin showed us inside the Kingdom of Moo mixed humor, action, and human behavior into something so imaginative and original that nearly 80 years later that world is as beautiful and thrilling as the day it first appeared. This is timeless comic storytelling.

His work stands with the best of American imaginative writers. When he gives a character such as Princess Wootietoot such a name he brings to mind the characters who populated L. Frank Baum’s World of Oz.

Hearing Alley Oop call one of this friends an “. . . ol’ jack-leg stir-bug” or use an expression such as “. . . tryin’ t’chizzle in on my gravy” holds the same magic for readers that Mark Twain brought us when he introduced us to the folks who lived and worked along the banks of the Mississippi.

Part of the American nature of the strip is the way Hamlin combined vaudevillian-style reactions with classic cartoon sound effects.

You can’t help but smile as a caveman falls over with a whoosh of air as above him stars and a cloud form with the word “PFT!” inside. When the previously mentioned man on the pterodactyl drops a bolder from the sky, breaking one of his valuable vases in the process, Oop raises his fist against the sky and shouts “WHY YOU—!” as exclamation points, springs, lighting bolts and more fill in the blanks on that sentence.

Hamlin’s art shows a deep relationship to the evolving world of cinema. He creates panels that feature deep focus in such detail that it becomes three dimensional. You can’t help but wonder if Orson Wells was studying one of these pages four years before he filmed Citizen Kane in 1941.

Hamlin had a delightful ability to contrast various shadows against just the right amount of black and place both inside the bright colors that filled the world of Moo. This ability to so skillfully use opposition hints at a familiarity with the style of expressionism that grew in the art world before the First World War.

This side-by-side contradiction of light and dark, shadows, and detail moved quickly among the creative arts. In its most resounding example, expressionism proved to be influential in the film world as that movement grew in such silent German films such as Nosferatu (1922).

That use of shadows works so well because Hamlin uses them minimally. The majority of the strip is filled with lush, colorful scenes of trees, riversides, and the pink, brown, and yellow walls of sheer rock.

Hamlin, especially in these early years of the Sunday pages, stands with the best that comic strips ever offered.

Hal Foster’s work on Prince Valiant is legendary and justifiably revered by critics as well as fans for its lush backgrounds and fully realized panels. Hamlin is fully capable of creating images filled with as much beauty and wonder as Foster did. But what Hamlin shows us is tempered by a softer, less romantic approach.

Inside this new collection from Dark Horse there is an opening scene inside the front cover that spans two pages. In the bottom left corner, near the trunk of a large tree at a bend in a river, Oop and his friend/tormentor Foozy are standing together in conversation. Behind them an entire world of dinosaurs, reptiles and ancient prehistoric fauna opens up.

The artist drops a pink pterodactyl against the dark, dark green of a massive treetop. Against the white of the sky and the blue of the water, the darkness in that treetop allows the action to jump out at the reader. If you look closely you can find a crimson, spotted stegosaurus eyeing up his next meal, which might even be Oop himself!

On the other side, a couple of bemused Allosauri look out into the distance as if scanning among the highest trees for their next meals. While the strip does contain some wild fights and doesn’t skimp on acknowledging the dangerous nature of dinosaurs, the scene is quietly serene.

In building his stories from Sunday to Sunday, Hamlin found moments that exist in between time. He takes a simple gag such as the standard “fish that got away” tale and in 16 panels fills it with finely crafted moments that others would miss between the set up and payoff of the gag.

In that one page, several panels dwell on the hopeful solitude of the fisherman. Another features quiet examples of how to be patient with a simpler friend. Three of them focus set up a slapstick chase and the final ones deal with the story-telling part of any fishing expedition.

The storylines that fill the first year grow so naturally that the pages almost become a seamless novel. A prize fight grows into a battle over taxes and that shifts into a story about animal rights.

This is a strip that is ripe for discovery. In his introduction publisher Mike Richardson reminds us how hard it once was for fans to find their favorite movies, books, games, and especially newspaper comic strips. He also reminds us of the research that Hamlin did in order to bring such a world to life.

Working with historian and curator Russ Cochran, Dark Horse has created a beautiful book to introduce the world of Alley Oop to everyone.