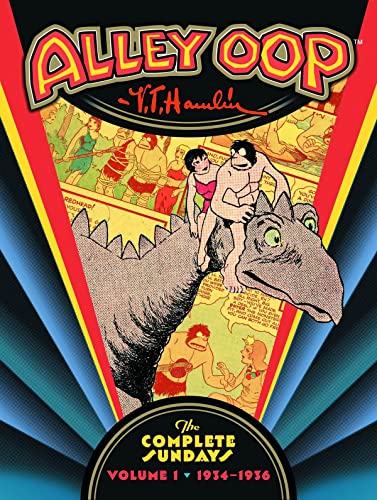 “This new collection form Dark Horse Publishing is the perfect book for a nine-year-old boy or girl who has just fallen in love with dinosaurs. It is a wonderful reference for the historian. And it is a great book for anyone who loves to read adventure, to laugh, or just to look at killer dinosaurs.”

It is amazing that Hollywood hasn’t picked up Alley Oop for the big screen. It has absolutely everything you need for a blockbuster.

There are dinosaurs, beautiful women who are more intelligent than the men, innovative landscapes, and idiots who don’t know that they are idiots. It is a story filled with royal intrigue, action, and adventure, and at the center there is a nobleman who is prone to the occasional frustrated outburst as he struggles to get by.

Alley Oop: The Complete Sundays 1934–1936 fully captures the early glory days of the legendary strip. Each page is brilliantly restored. The original lines as drawn by creator V. T. Hamlin are sharp and distinct. The colors, once muted on blurred newspaper pages, jump straight out at the reader.

Stunningly popular in its time, Alley Oop not only made millions laugh on a daily basis, it helped dinosaurs move into the public consciousness. Given the presence of those terrible creatures in today’s world, it is hard to believe that there was a time when people had no real idea what they meant to our planet’s history.

From the second they were discovered dinosaurs have fired the imagination of scientists, theorists, and artists. In the 1830s, when dinosaur tracks were discovered in the Connecticut Valley, some believed they were the tracks of ravens freed from Noah’s Ark!

In 1912 Sir Arthur Conan Doyle, better known for creating Sherlock Holmes, published The Lost World and gave readers a scenario in which these ancient beasts still lived in South America.

By the time that Alley Oop made its 1933 debut in newspapers, dinosaurs were really making their presence known. As publisher Russ Cochran notes in his introduction, Tarzan had fought a T Rex, King Kong was the most popular picture of 1933, and The Chicago World’s Fair had a full-scale exhibit of life-sized dinosaurs taking up a massive hall.

As both artist and writer for the strip V. T. Hamlin did a tremendous amount of research. While the writing held a lot of belly laughs and insights into human behavior, he didn’t mess around when he was portraying the beasts that populated Oop’s prehistoric world.

Leading off each Sunday page is a topper panel featuring one of his expert drawings of a creature. His depictions of a Allosaurus, a sabre tooth or a felis atrox (a great lion) still stand up over 80 years later.

Even when he draws a creature as obscure as a Silurian eurypterid the image is alternately thrilling and scary. You can just imagine a nine year old on his parents’ living room floor reading the Sunday page in 1934 and being blown away by seeing such a creature for the first time.

Hamlin’s skill as an artist isn’t limited to just reproductions of fossilized creatures. His ability to create wonderfully funny prehistoric humans yet never rob them of their inherent humanity is equal to that of E. C. Segar’s.

Like the creator of Popeye, he could add an exaggerated quality such as oddly shaped arms or a distorted torso and still leave the character ultimately believable.

He could also create complicated and detailed backgrounds that only enhance the action at the front. This leads to beautiful moments of rediscovery when the reader takes a second or third look at the strip. The backgrounds are filled with floral arrangements, jungles, glorious ponds perfect for reflection and swimming, and vast expanses of ancient lands.

As beautiful as it all is, none of this would matter if Hamlin didn’t give us people we could laugh at, relate to, dislike, or empathize with. As an everyman Oop is plagued by many of the same problems that we are today.

Relationships that move up and down with an ounce of predictability. Neighbors that want too much and give too little. Lame ideas from those in charge and unrealistic requests from those he loves.

Hamlin wrote with a sense of balance between men and women that seems perfect for today. The women who walk through these panels aren’t doormats for their caveman counterparts.

If one of them is hit over the head with a club you can bet your bottom dollar that she gets right back up and clobbers the poor lout who made the mistake of trying to drag her off. When two tribes meet it is their queens who make sense of it all and make sure that the men don’t start a war.

The Sunday page debuted on September 9, 1934. As was the tradition with many strips that appeared in both dailies and on Sunday, Hamlin ran two separate narratives, often running with a storyline or gag as an anchor across weeks. Reading them in order as presented in this volume is not only a treat it also expands and deepens our appreciation of his work.

This collection collects the first two years of Sunday pages in the strip’s long, long run. Reprinted exactly as they first appeared, many of these pages haven’t been seen in decades. It doesn’t matter if you have ever seen Alley Oop before or not, there is a tremendous sense of discovery in reading these pages for the first time.

Alley Oop reminds us how great the Sunday pages of an American newspaper once were. There is something magnificent in these oversized pages. Hamlin created a complete world and falling into it for the first time is a thrill.

This new collection form Dark Horse Publishing is the perfect book for a nine-year-old boy or girl who has just fallen in love with dinosaurs. It is a wonderful reference for the historian. And it is a great book for anyone who loves to read adventure, to laugh, or just to look at killer dinosaurs.