All You Could Ask For 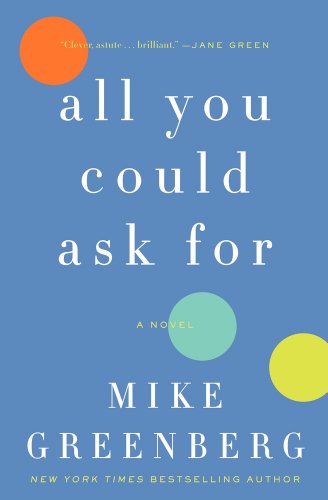 Mike Greenberg, whom many readers may know as the co-host of ESPN’s “Mike and Mike in the Morning,” one of the highest rated sports talk programs in the U.S., would seem to be the most unlikely author of a novel about women’s friendships.

Yet All You Could Ask For is just that: chick lit meets Steel Magnolias—and just the kind of estrogen relationship literature you’d least expect from the “King of Guytalk.”

The opening line—“Whose ass is this?”—sets this novel firmly in the territory of chick lit, as the first of three women, Brooke, examines her once-legendary backside. She’s debating whether her butt is photo-worthy because this giddily married mother of two is deciding whether to gift her husband, on his 40th birthday, naked pictures of herself.

Naked pictures of a similar sort turn out to be the downfall of Samantha, a 28-year-old rich girl newly married after a whirlwind courtship. On her honeymoon, Samantha discovers the attachment on her husband’s latest email is actually a naked picture of his sexy coworker (but not, alas, Brooke). Devastated, Sam dumps the guy and extends her stay in Hawaii in order to come to grips with her broken marriage.

The third corner of this triangle is Katherine, a high-powered career woman, ambitious, fit, put together, who still works for the man she once loved—the same man who dumped her, years ago, for someone of far lesser intelligence. After a disastrous blind date, she realizes she needs to get away in order to gain perspective on her chaotic life.

In Part One of this oddly fractured novel, these women’s stories—three little novellas—are braided together but never intersect. This lack of connection and the tight little bows that seal the happy endings, give the novel a sense of sea-breeze insignificance. After a hundred pages, it’s still a book you can easily put down when it’s time to reapply the sunscreen.

In Part Two, everything changes—including the feeling, tone and even the structure of the narrative. Chick lit morphs to Steel Magnolias as a terrible event occurs. Each woman grapples with how to react. Each chooses a different—and in one case, surprising—path.

The juxtaposition of their choices, and their increasing involvement in each other’s lives, imbue the story with gravity and vitality. Here, Mike Greenberg’s novel finally finds its emotional heart and becomes full of empathy and warmth. But it’s a change so sharp that it fractures the novel into two different kinds of books: The first half is as light as thistledown, the second as solid as oak.

The novelty of a sportscaster writing women’s fiction will certainly get a lot of copy for Mr. Greenberg, who is also the author of Why My Wife Thinks I’m an Idiot: The Life and Times of a Sportscaster Dad, a humorous book of observations, as well as Mike and Mike’s Rules for Sports and Life, which Greenberg cowrote with his ESPN cohost Mike Golic.

In a recent interview he confessed he went into sportscasting so he could pay the bills while trying to write for a living. All You Could Ask For, he states, is his two-year labor of love.