All We Knew (The Cabots) 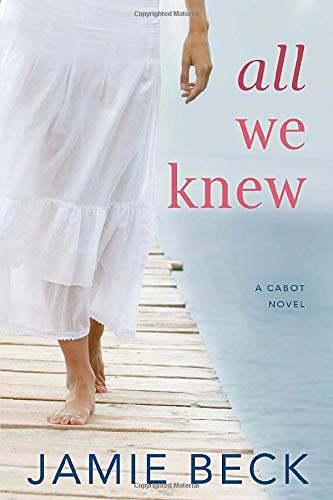 Many women's biggest desire is to have children, and Sara Cabot is not exempt. Married to Hunter, a highly successful CFO of the family international tea corporation, Sara is blessed with everything money can buy. She lives in a large, beautifully decorated home and is adored by Hunter. Yet having endured grueling hormone shots and invitro-fertilization, she is unable to conceive.

In addition to Sara's grief at not bearing a much-wanted baby, she feels her marriage is falling apart. Like most men, Hunter does not share his emotions, making Sara wonder if he really does want a child. He spends all his time at work, and the company consumes his every thought.

Hunter's father promised him the business upon his retirement, but his step-mother, Jenna, is pushing to sell. The offer they receive would allow the whole family to live in luxury until the end of time, but Hunter loves his heritage and is distraught  and angry his father would take this from him. Hostility escalates as Jenna and Hunter spar back and forth over who will win control.

As Hunter spends his energy engrossed in saving his legacy, Sara's disillusionment and loneliness mounts. She volunteers at a women's shelter where she falls in love with Ty, a toddler the son of a drug addict. Hunter warns her about getting attached knowing she'll lose contact when the boy's mother gets back on her feet.

While Sara mourns over the children she'll never have, Hunter's focus is on his career. It is understandable he'd want to save everything he's worked for most of his life, but his callousness toward Sara doesn't bide well, causing her to question her vows, especially with believing Hunter's assistant, Bethany is setting her sights on him as told by her unexpected visit to Hunter's office:

". . . once again seeing a hint of Bethany's interest in her husband. Did Hunter notice? Did he care? She didn't think so, but how many wives had been duped by husbands who had affairs at the office? Might Bethany eventually capture his interest? She's seen it happen to friends, and with Hunter's own dad, more or less."

Of course, Hunter cannot understand his wife's feelings and withdraws. Sara's system, flooded with hormones, makes her suspicious of Hunter's love for her. Though Hunter says he wants a family, he is obsessed with Cabot Tea, and discord happens not only between him and Sara but also his father and Jenna, whom he dislikes and believes thinks only of herself.

When Hunter's dad becomes ill, tensions flair; and in addition to this his younger unmarried step-sister, Gentry admits to being pregnant. Hunter wonders if this will push Sara over the edge. They are now in a relationship akin to two trains leaving the station going in opposite directions.

The various players in this tale supply their separate justifications for their actions, adding dimension to this novel. It is easy to empathize with both Sara and Hunter as well as his father and Gentry, yet it is clear there is no actual communication between them. Each knows what they want and is stuck in that groove, finding it hard to accept the other's point of view.

All We Knew encompasses the topics of infertility, homelessness due to drug addiction, and adoption. Heart wrenching and emotional, the book delves into many scenarios offering well fleshed-out characters trying to solve problems common in today's society.