All the Water I've Seen Is Running: A Novel 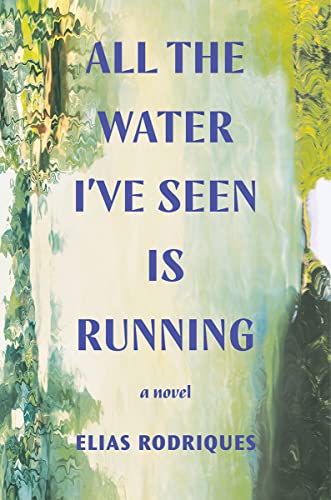 “All the Water I’ve Seen Is Running is a worthy addition to the group of fine recent novels about gay men of color looking for their own sense of racial and ethnic identity as well as meaningful connections with the people who love them.”

Can one find oneself in the past? This is the question asked by Elias Rodriques’ poetic first novel, All the Water I’ve Seen Is Running. The time is 2015, but, as one character puts it, human time is a point in the span between the land rising from the sea and the water once again reclaiming the land. Perhaps the flow of memory can also engulf one.

The setting is a poor town on the Florida coast, ravaged by poverty compounded by the recession of 2008. Violence seems inevitable: the beating of children, the drunken brawls, legacies of the violence of slavery and racism. Young Black men in this area live in fear of redneck violence: many people, Black and white, have suffered brutality from family members.

Daniel, now an out gay man and a teacher in New York City, has returned to his hometown to mourn the death of Aubrey, the white girl he loved chastely in high school. Audrey, always a rebel, was Daniel’s best friend. While there, he reunites with friends from his high school track team, particularly Desmond, the other Black man in the group. In Desmond’s company, Daniel’s language reverts to the regional Black dialect he shared with his friends. Daniel is mixed race—South Asian and African by way of Jamaica. His mother moved him from Jamaica to Brooklyn and eventually to the Florida coast.

Rodriques sensitively depicts the complexities of desire and sexual identity. Daniel now identifies as a gay man, but he still has to deal with his unrequited desire for Audrey. Doing so draws him briefly into the violence that is endemic to his home region as he confronts the young man responsible for Aubrey’s death. His friends protect him as they did during his adolescence. He also has to get over his fears of rejection and come out to his friends.

Daniel is not only drawn into his own past. Through stories his mother has recently told him, he is drawn back generations thorough the history of parents, grandparents, and great grandparents to the brutal history of slavery. Where in all these violent stories and experiences can Daniel find himself? Seeming lost in his and his family’s memories, can he find his way back to the present?  He broke off with his boyfriend because he didn’t want to raise a child, a link to the future.

Rodriques has captured in sharp detail this poor section of Florida and the dialect of Daniel’s social world. Black and redneck speak a similar patois. Nature is never idyllic. Rivers are gray or brackish, poisoned by the people who live near them. Renewal can only come from the love Daniel’s friends share with him and a return to the present.

There is poetry in the descriptions of the back roads and humble dwellings as well as in the dialect. Daniel and his friends are in motion through much of the novel—driving on back roads or running along the beach. Their talk is sometimes playful, often painfully candid. The Black men find power in calling out the N word.

All the Water I’ve Seen Is Running is a worthy addition to the group of fine recent novels about gay men of color looking for their own sense of racial and ethnic identity as well as meaningful connections with the people who love them. Rodriques’ novel also follows the work of many Southern writers in evoking a powerful sense of place and celebrating its language.