Is That All There Is? The Strange Life of Peggy Lee 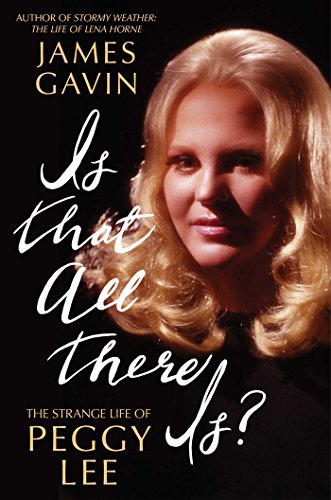 “Gavin keeps focus on what Peggy Lee was doing musically even as everything else in her life was sensationally spiraling out of control.”

Peggy Lee grew up as Norma Egstrom in the bleakest circumstances in North Dakota during the Depression. The youngest of five, she found her life got even bleaker when her mother died when she was only five. She clung to her father, but he was an alcoholic and emotionally out of reach. The sensitive Norma ended up spending much of her time at the mercy of her demanding stepmother.

As James Gavin chronicles in his absorbing new biography of the singer, this background made the singer tough and driven to create her own magical world.

As a young singer, Lee had many dreams but was realistic about her talents, both positive and negative; she started to enter amateur contests and landed spots on the local radio programs. She made her way to Fargo, performing “Songs by Peggy Lee” a 15-minute local radio spot, but she also had jobs at a bakery and restaurant to support herself.

Lee was modeling her style on subtler vocalese rather than the popular big band belters. Lee then became more enamored of the sounds of black jazz musicians and vocalists like saxophonist Lester Young and Maxine Sullivan who “danced blithely on the surface of deeper emotions.” Even though she wanted her own indelible singing sound, Lee became so enamored of Billie Holliday that she tried to copy her phrasing, to the dismay of Holliday, who expressed her dislike, Lee reply to Holliday was that it was because she loved her jazz phrasing so much. As one of Benny Goodman’s singers she started to learn a lot about the technical tools she needed if she was going to build a solo career. She also started to hone a minimalist style that was uniquely her own.

Also in the band was guitarist Dave Barbour, and he and the singer fell in love. They married and started to record hit records, notably “Why Don’t You Do Right” and “You was Right, Baby” which Lee wrote. Lee was so much in love that she retired from singing to raise their daughter Nicki.

She shortly returned to singing after she was coaxed into a recording deal because they needed the money, and presently her career started to soar.  As Lee was becoming more famous, she became more controlling about her career and more emotionally remote with Barbour. Lee focused most of her attention on expanding her career. Barbour wanted a quieter life.

Barbour, a low-key, consummate musician and heavy drinker, couldn’t adjust to her high-pressure star status and the marriage fell apart after seven years, even though they were devoted to each other.

Gavin dissects the highs and lows of Lee’s career and her musical achievements as a vocal artist and songwriter outside of her commercial successes. She rivaled Judy Garland in her ability to make stunning comebacks that would put her back on top.

Lee changed from Capital Records to Decca, where she was given unprecedented control over what she wanted to record. Lee was scoring hits, but by the 50s, her genres were losing popular ground, and she started having just as many commercial misses as she had hits.

When she recorded “Fever” she catapulted back to the top of the charts, when all of the other former big band singers were being pushed out of the mainstream by the rock and roll takeover. For much of her career, Lee remained a huge nightclub draw and performed to sell out houses in the top rooms in New York, Los Angeles, and Las Vegas.

Eventually, Lee slipped into her own own boozy, sedated world, showing that she could completely self destruct in public as she had done at the White House and on the Oscars, both garnering world-wide press, then completely retreat to her bed for days and emerge as if everything had gone smoothly.

Even though her music was waning in popularity, she wasn’t slipping into the background quietly. She sued the Disney Corporation successfully over royalties from the songs she wrote and sang in the 50s animated film Ldy and the Tramp. Disney eventually made millions in home video sales without paying residuals to the performers, but Lee produced her original contract and proved she was entitled to a percentage of all future royalties.

Gavin writes comically of several of these episodes, but he also reveals a morose and desperate performer, who treated everyone around her like an indentured servant, firing anyone on any pretext, and sometimes going out of her way to humiliate them in public. Meanwhile, Lee was suffering her own public humiliations as Gavin details, hilariously, in his chapter on her autobiographical musical Peg written by Lee with composer Cy Coleman, which was a legendary Broadway disaster.

Gavin’s bios of such complex personalities as Chet Baker and Lena Horne added to the musical literature of what they achieved past their indelible stardom. With Peggy Lee, he had perhaps his biggest challenge: she was full of what played out as layers of contradictions, yet her private motives remained myopic.

As with his other biographies, the meat of Is That All There Is is Gavin’s adroit music writing and the dimension he brings to the details of Lee’s life. His command of the artistry and musicology in the worlds of jazz and Lee’s contemporaries is first rate. As with his bio of Baker, Gavin keeps focus on what Peggy Lee was doing musically even as everything else in her life was sensationally spiraling out of control.