All That's Bright and Gone: A Novel 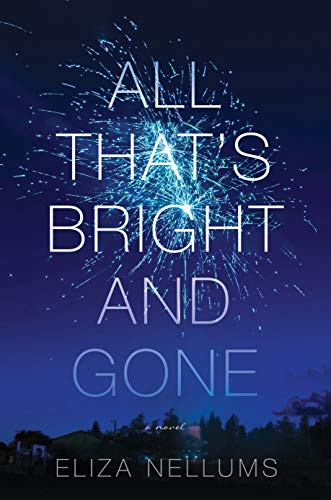 “Aoife’s poignant and endearing story will linger long after the final pages. This family-forward debut is one to be savored and shared.”

“I know my brother is dead. I’m not dumb like Hazel Merkowicz from up the street says. Sometimes Mama just gets confused, is all.”

So begins six-year-old Aoife’s tale in All That’s Bright and Gone. We meet Aoife as she’s brought into a psychiatrist’s office and struggles to understand what’s happening to her. Her mother has been hospitalized after a psychotic break that led to a car accident, she doesn’t know anyone except her invisible friend Teddy, a mischievous, shapeshifting bear, and all the adults mispronounce her name. It’s EE-fah, but everyone says Eva.

Enter Uncle Donny, who takes Aoife home and becomes the reader’s mirror as he realizes the depths of his sister’s mental health struggles. Aoife reluctantly introduces him to their life, showing him how to shut the door quickly so none of the neighbors can see their hoarding “obstacle course,” and how her mother had to get rid of the TV because demons came out of it. Uncle Donny is overwhelmed, but Aoife has a bigger problem: she needs to find a way to bring her mother home.

Aoife decides—without regard for things like logic or reasoning—the only way her mother will come home in time for the Fourth of July fireworks is if she solves her brother’s murder. No one wants to talk about what happened to Aoife’s older brother, Theodore, so with the help of her mystery-loving next-door neighbor as well as invisible Teddy, Aoife begins investigating on her own.

Aoife presents a far more sophisticated narrative voice than five-year-old Jack in Emma Donoghue’s Room, to the point that some readers may question certain leaps in the point of view. Nellums occasionally uses phrases that don’t feel consistent with a six-year-old narrator. Aoife somehow absorbs the dialogue around her with a journalist’s acuity, and doesn’t blink an eye at the kind of curious grown-up diction—“stuffed shirts” or “madhouse”—that would send most first graders stumbling. But in giving those moments a pass, readers will be rewarded with a wonderland of entertainment.

There’s no humor like a child’s humor, and Aoife brings a particularly vivid imagination to the world around her. At one point during a church service, Aoife comments that, “incense is a fancy smoke that Jesus likes.” She sees herself on a saint’s quest to save her mother, and tries to show the same bravery as her personal saint, Joan of Arc. The entire book is framed with an innocence and big-heartedness that will remind readers of A Man Called Ove. We’re called back to the magic of childhood and how a single summer day can stretch huge and limitless, a thousand moments of possibility.

At the same time, the reader is acutely aware of Aoife’s vulnerability. The simple act of stealing and igniting a cigarette lighter becomes fraught with danger. A man walking into a bedroom at night or taking a child for a car ride becomes imbued with sinister undertones. We are reminded again and again of how little agency Aoife has in the adult world, and how susceptible she is to exploitation and abuse.

As Aoife’s investigation ramps up and she gets closer to solving her brother’s murder, the reader begins to question more and more of her reality. Is Teddy really just an invisible friend? Do Aoife’s mother’s mental health issues affect her daughter as well? What actually happened to Theodore? These questions and more will keep the reader turning the pages to a surprising and deeply satisfying conclusion.

In All That’s Bright and Gone we are reminded that through a child’s eyes, the adult world is inherently mysterious. The past is murky and unknowable, while the future seems impossibly distant, and often the hardest and scariest questions in life bring the most important answers. Aoife’s poignant and endearing story will linger long after the final pages. This family-forward debut is one to be savored and shared.

Mindy Meija's most recent novel is Leave No Trace (Atria, 2018), nominated for the 2019 Barry Award for Best Novel and a finalist for a Minnesota Book Award.