All the Sonnets of Shakespeare 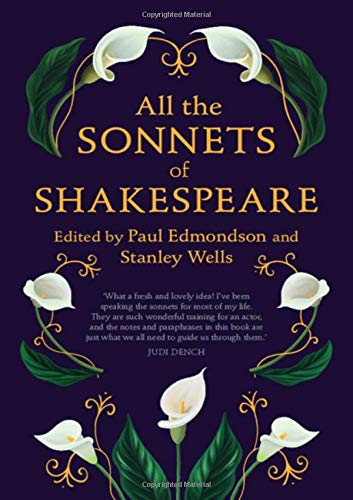 “Becoming familiar with the Elizabethan language is not easy, but Edmondson and Wells have taken it to a new level with their detail and final explanations.”

If you are a “Shakespeareophile” or wish you were, then All the Sonnets of Shakespeare” edited by Paul Edmondson and Stanley Wells, is a book you must acquire. Warning, however, it will require considerable concentration as you begin this journey.

Parceled out into two parts, the editors provide a detailed history of Shakespeare, including when he started writing sonnets, writing them in plays, his friends, and placing himself in his sonnets.

Edmondson and Wells have gathered a total of 182 sonnets either known to have been written by Shakespeare or attributed to him. In presenting them, they have “endeavour[ed] to arrange them, so far as current scholarship allows, in the order in which they were written.” Their “chronological approach enhances understanding of Shakespeare as a developing writer of sonnets and challenges the biographical assumptions and expectations that we as readers might take with us.”

The editors explain their presentation as “A chronological ordering seeks to honour Shakespeare’s bursts of creativity; his development as an artist, his skill in his use of the form for different purposes, his employment of it across different genres, and his engagement with the sonnet as a private, personal, intimate form of verse, and as one which could be heard in the public theatres.”

To say this is a major task would be an understatement, and yet Edmondson and Wells have dug into history and made the case for their proposal.

They take the plays apart and explain how the various characters speak through the sonnets and in some instances how the characters attempt to write a sonnet in the play—with or without success.

Each of the play examples is detailed through the characters’ actions that are used to move the story through the use of sonnets.

Sonnets came into vogue in 1591 and remained a popular form of writing through 1597 when the style began to fade. “. . . it is likely that Shakespeare wrote most of his non-dramatic sonnets during this period,” although they appeared in print years later. While the sonnet is not credited to Shakespeare alone, it is said that “he benefitted from and absorbed the other sonnet writers’ work, and then made the form a vehicle for a much more unsettling and original expression of his feelings and thoughts.”

Edmondson and Wells also consider how Shakespeare’s friends may have played into his sonnets, as 121 involve both real and imaginary people.  “This volume consistently identifies the sex of a sonnet’s addressee . .  . [s]ometimes this can be confidently decided because of Shakespeare’s use of personal pronouns; sometimes it is less straightforward.”

The editors also present an interesting take on the sexuality of the sonnets, “We hope that inconsistently identifying the sex of the addressee, and especially by signaling when this cannot be determined, we have played a part in emphasizing the bisexual quality of Shakespeare’s sonnets.”

One of the more interesting discussions about the sonnets is in the section titled: “His Name is Will.” Interesting in that Edmondson and Wells “believe that many of Shakespeare’s Sonnets are deeply personal poems, written out of Shakespeare’s own experience . . . the only personal name mentioned in any of them is the poet’s own: ‘my name is Will’” where “Reading Shakespeare’s Sonnets can . . . seem like encountering miniaturised dispatches from life turned into poetry: the poet’s relationships, inner turmoil, feelings of mortality, regret, . . . guilt, but also his joys and gratitude.”

As expressed by the editors when they took on this goal of chronologically arranging the sonnets, “It is our hope that . . . we have newly minted these poems and poetic extracts in a fresh and open context . . .”

They sum up the first part of this book with “We hope the reader will be as fascinated as we are to read all the sonnets of Shakespeare in an approximate order of their composition,” and they confess that “it is impossible to convey the richness of a Shakespearian sonnet in prose . . .”

But that’s just the first part.

Leaving the detailed history and moving forward, Edmondson and Wells present each sonnet with the date range of its composition; a thumbnail sketch of the poem, its number or play reference, and words in short phrases are explained or defined as needed.

These sonnets can be read in the manner in which they are presented, or for the reader who is familiar with Shakespeare and may have a favorite sonnet, they can move back and forth through each.

Becoming familiar with the Elizabethan language is not easy, but Edmondson and Wells have taken it to a new level with their detail and final explanations.

This is a book at one reads slowly and digests in sections, but the meal is worth the read.