All the Lights Above Us: Inspired by the Women of D-Day 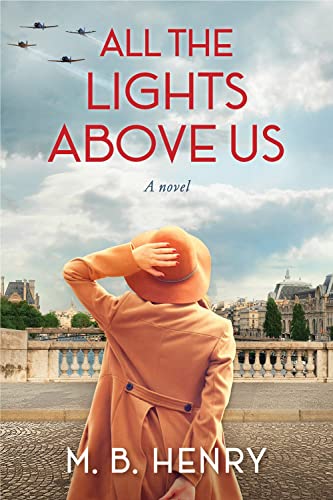 All the Lights Above Us covers approximately the 24 hours of D-Day, almost minute-by-minute, through the eyes of five disparate women in England, France, and Germany whose lives are upended by the huge Allied landing in Normandy in World War II:

Adelaide, a widowed French grandmother alienated from her daughter, who has come to feel almost motherly toward the German soldiers billeted in her Normandy farmhouse over the past few years.

Emilia, the beautiful German secretary to an SS leader in Normandy, who was raised by devout Nazi parents and who likes to remember that she “once shook the hand of Adolf Hitler.”

Flora, a young French Resistance courier in Normandy, who chafes at being relegated to “women’s work.”

Mildred (an actual historical figure, known as Axis Sally), an American-born actress who began broadcasting Nazi propaganda from Berlin in 1940 because she saw it as the only way to get a job in the performing arts.

Theda, a no-nonsense nurse in Portsmouth, England, who dreams of a career, not marriage, but who isn’t prepared for the day’s tsunami of horribly wounded soldiers.

As the women wake up on June 6, 1944, clues to the day’s looming turmoil begin to bubble. Pedaling toward the outskirts of Caen, Flora is battered by “snow showers of ash” and “the sharp tinge of smoke.” At Mildred’s Berlin recording studio, “disheveled reporters hunched over microphones,” their hands shaking. Theda sees that laundry hanging on an outdoor clothesline has turned brown and grey from the exhaust of “formations of planes [that] had roared past all morning.”

Not surprisingly, the most interesting of these protagonists are the ones who, to some degree or another, have let themselves be seduced by evil—Adelaide, Emilia, and Mildred. Author M. B. Henry believably shows how they have managed to lie to themselves and how their blinders are now tumbling off. For Adelaide, the young German soldiers are just “wounded, affectionate, loud-mouthed boys” who “treated her like their own mother.” Mildred desperately repeats her mantra: “I’m just an actress. It’s not propaganda. It’s just my job.”

On the other hand, the staunchly anti-Nazi Theda and Flora are pretty much clichés of brave, idealistic feminists who don’t want to sit home knitting scarves.

The intense focus on a single day gives Henry, a California-based historical consultant for films and TV, the space for vivid details. She is unsparing in her descriptions. When Flora enters a hospital in Caen, “noxious fumes of blood and sweat practically choked her . . . the men and women were plastered with dirt, blood, and filth.”

All these aspects make this debut novel an apt multifaceted portrait, not just of World War II, but of any “good war.” Mildred’s and Emilia’s stories personify the evil that is worth fighting against; Adelaide shows the temptations to which even good people can succumb; and the horrifying descriptions remind us of the price we pay.