All the Horrors of War: A Jewish Girl, a British Doctor, and the Liberation of Bergen-Belsen 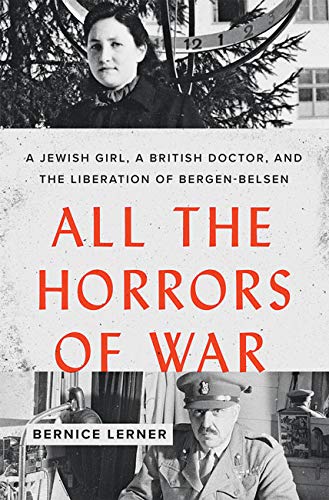 “Bernice Lerner has provided us the opportunity to see what results when one woman’s will to survive and one man’s humanity are combined.”

The Holocaust is such an ugly word and topic; however, it is gratifying, whenever possible, to overlook the horror of that event and read a related story that has as much of a “happy ending” as can be achieved under the circumstances. In this case, the author is the daughter of the Jewish girl, referenced in the subtitle, who survived her experience in one of the most infamous of Nazi concentration camps, Bergen-Belsen.

Bernice Lerner intertwines the stories of her mother and the British doctor, Brigadier Hugh Llewelyn Glyn Hughes, recounting how each came to be at the camp by the time of its liberation in mid-April, 1945. Her mother, Rachel Genuth, and aunt, Elisabeth, were among the thousands of Hungarian Jews who were deported to camps in the Greater Reich following the Nazi takeover of that country in 1944.

As much as this is her mother’s story, it is also that of her aunt as the sisters went to the lengths possible to try and ensure each other’s survival amid the lack of food, sanitation, and medical care. Exacerbating these conditions was the peril fraught with volunteering for work details that could just as easily have resulted in being sent to the gas chambers from overwork and physical abuse.

Meanwhile, Hughes was one of the top medical officers in the British Second Army that fought its way across western Europe. As if he didn’t see enough death, carnage, and destruction along the way, he was just as appalled by the death, degradation, and misery which he discovered at Bergen-Belsen, the relief of which he was responsible upon liberation. Written accounts, much less photographic evidence, defy description of camp conditions, not surprisingly.

Each personage’s story is as much a biography of their lives as it is an account of how their paths eventually crossed. Although the book’s prologue begins with the war crimes trial of the camp commandant, Josef Kramer, it is otherwise chronological, starting in the spring of 1944 and extending to the spring of the following year, recounting each one’s experiences during the course of the period specified for each chapter.

The final chapter and epilogue provide postwar information on each life and their efforts over the years to ensure that we never forget. Of course, for Genuth, there was the recovery from tuberculosis, the physical abuse of overwork, and the psychological stress of modern-day PTSD. After her recovery, she was able to marry, have a family, and move to the United States.

Hughes went on to an outstanding postwar career in medicine and was especially proud of what he had been able to accomplish for the surviving inmates after liberation despite the deaths of some five thousand deaths after the fact. Although he never actually met Genuth at the time, his actions in providing relief at the camp were instrumental in her survival. Not until after the war did they become acquainted as a result of each’s efforts at remembrance and memorialization.

The book has a two-page map that follows the paths of both Genuth, from Hungary, and Hughes, from the United Kingdom, and how they found themselves at Bergen-Belsen. Interspersed throughout the text are many photographs that provide as much context about each as they do visual information on conditions at the camp and the efforts at relief. Particularly poignant is a 1993 photograph of the author, her mother, and three aunts, all four of the latter camp survivors.

There are also the usual acknowledgements, endnotes, and index. The endnotes demonstrate extensive use of primary source documents such as reports, diaries, archives, personal accounts, and, of course, the transcript of Josef Kramer’s trial.

Lerner’s writing style is not necessarily that of a historian, it should be noted. Truth be told, it is written much more for the edification of the general public with certain term explanations for clarification purposes by her in parentheses but some of which also give the impression of somewhat less familiarity with military terms, technology, and descriptions.

We all need to learn, know, and understand as much as possible about the ultimate man’s inhumanity to man. We should be appreciative that Bernice Lerner has provided us the opportunity to see what results when one woman’s will to survive and one man’s humanity are combined.