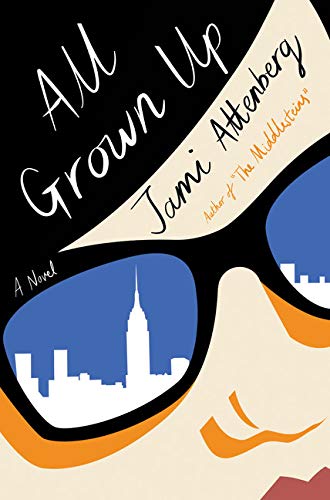 “I don’t need to jump off cliffs into oceans to die, because every day there is a little death waiting for me. All I have to do is wake up and walk out the front door.”

At 39, Andrea Bern is teetering on the frayed edge of sanity. Straddling the divide between child and adult, a chasm long since crossed by most people her age, she struggles with what it means to be All Grown Up.

Jami Attenberg’s latest novel is a sobering look at what happens to adults whose emotional development is stunted in adolescence. In chapters arranged as non-time linear vignettes, she introduces Andrea in a series of frustratingly unfinished roles: a failed artist, a neglectful sister and daughter, a lackluster employee, a catty friend, a desperate lover.

It is only as the chapters progress and different facets of Andrea’s life are introduced that Attenberg humanizes her protagonist, attempting to explain why Andrea never quite finishes anything. Whether due to the neglect of mother, mentor, or friends, Andrea’s life of “almosts” and “could have beens” becomes barely acceptable.

And that is the problem: that “barely.”

Attenberg has arranged her chapters—stories, really—much like Junot Diaz did in This Is How You Lose Her. Both books have similarly stunted protagonists, shaped by childhoods and adolescence filled with need and want, and both stories move in a similar non-linear fashion.

Andrea is no Yunior, Diaz’ protagonist, though. Though both struggle with coming to terms with adulthood, Andrea never becomes likeable. She has a lot of complaints, but Attenberg never shows her struggling to overcome her problems; at the end of the book, she is still the same self-centered person she was in the opening chapters. Andrea seems to have learned nothing of use from her travails, rendering the backstory chapters more excuse for childish behavior than opportunity for character growth. Where Yunior battles through to his Aha! moment, Andrea never changes.

There are a few wryly funny moments in All Grown Up—Attenberg can turn a nice funny phrase—but this is no side-splitter. Despite the blurbs on the cover, there is nothing “hysterical” about a middle-aged woman who acts like a drunken, libidinous teenager. Andrea is bitter, lonely, and self-absorbed, and that is perhaps fair.

What makes All Grown Up a dreadfully depressing book is that every opportunity Andrea has to change her situation and every insight that should have come from her past comes to naught. Andrea is great at dramatically or cuttingly bewailing her life, as illustrated in the quote above, but she is firmly ensconced in it and unwilling to budge. That might feel unfair to the reader.

Jamie Attenberg is a talent. Her prose is tight, and her arrangement of backstory chapters to gradually peel back the why’s of Andrea’s behavior is fresh. All Grown Up is perhaps best viewed as an ironic title, though, as Andrea never grows up. Never learns. Never changes. Perhaps this is realistic, but it makes for a dreary read.