All Eyes: A Mother’s Struggle to Save Her Schizophrenic Son 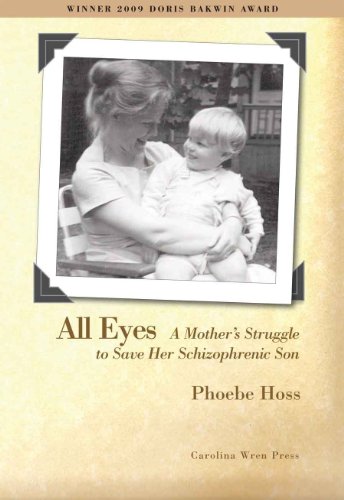 Even in the 21st century, relatively little is known about schizophrenia. While modern psychiatric methods are improving all the time and genetic research may eventually provide some answers—though it’s fairly unanimously accepted nowadays that there is a genetic connection—we are still pretty much in the dark when it comes to understanding, diagnosing, and treating the condition.

What is known, is that schizophrenia affects one in every hundred people throughout the world. It does not discriminate by class, status, nationality, color, or creed. It is an illness largely neglected by the media, and its devastating effects engulf millions of people every day of the week.

Bard is the oldest of two children, born to Phoebe Hoss in the 1960s. He is bright and lively and outgoing in his early life, until he reaches seven, when he begins to pick on his younger sister. A critical stage is reached when Bard is left with relatives, while his mother and father take a week’s vacation. The week, however, turns into two months, when his mother contracts meningitis and his rather unfeeling father—“I don’t like being a father, I never wanted to be one”—leaves him with the relatives, without any contact with the family.

All Eyes starts out as a dissertation on Phoebe Hoss’s own life and chronicles a rather self-obsessed parent who does not understand the young boy’s “terrible state of turbulence.” At ten years of age, Bard begins to show signs of violent temper: smashing things, throwing food, and beating up his younger sister. He also begins to accuse his parents—“nobody likes me”—and make threats—“I hate you. I’m going to kill you”—and goes off alone to his room to read books about guns.

To most people, this behavior would be cause for concern, but to Bard’s parents, it is “normal,” simply because they are wrapped up in their own needs and concerned mainly about what they’re not getting from their relationship with each other. Bard’s father is drinking, and Phoebe is verging on that sense of monomania.

Schizophrenia is not a single condition, but rather a wide group of conditions that are referred to collectively under that umbrella title. Few schizophrenics experience exactly the same symptoms, which can range from mild to chronic and, hence, the disease is not easy to spot in the early stages. In fact, in some sufferers, the disease is never detected at all. So, it is, perhaps, not too difficult to forgive Phoebe’s initial misinterpretation of Bard’s erratic behavior.

After the early onset of schizophrenia, the chilling symptoms of the full-blown disease are illustrated throughout the book as Bard grows older. The haunted young mind is exposed to the reader, and we feel the unbearable pain and the confusion and the desperation of a consciousness in turmoil.

Phoebe’s initial denial of a crisis is replaced by acceptance and a burning desire to understand and protect. Absence of meaningful treatment, however, apart from the ubiquitous use of potent neuroleptic drugs, leads to despair.

The inadequacies and vicissitudinous support of the mental health care system does little to protect Bard and even less to assist Phoebe in her quest to find a solution to the impossible: to find an answer where there is no answer. The lack of control over what is happening and the lack of coherent choices as to what can be done, are both cautionary and harrowing.

But, in the end, the book is also redemptive, insofar as it is an uncommon account of a condition and process that is experienced by thousands of people on a daily basis, yet is rarely spoken about outside the clinical dimensions of the illness and its erudition.

All Eyes is an intelligent, delicate, painful, courageous and honest account of a mother’s unceasing fight against the inevitable.

All Eyes is unique insofar as it allows the reader through a door into the mind of one particular schizophrenic. Inside that mind are many strange landscapes that are alien to most individuals, but which, nevertheless, are a very real part of the human condition.