All Dressed in White: An Under Suspicion Novel 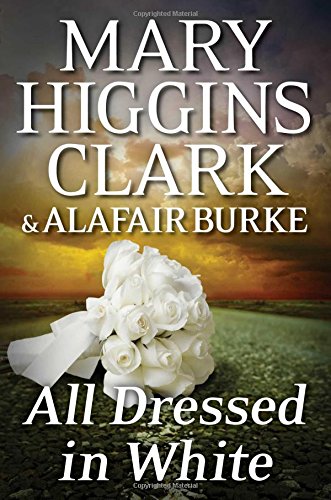 All Dressed in White by Mary Higgins Clark and Alafair Burke is the second in the Under Suspicion series and features Laurie Moran as the hard-hitting producer of the popular reality TV series that uncovers solutions to cold-case files—a premise that leaves the door open for endless stories to carry the series forward.

In the prologue, a wealthy young woman, Amanda Pierce, walks away from her storybook wedding and disappears into the darkness of the Florida night.

Five years later, Amanda’s disappearance is still a mystery—one that her mother Sandra cannot wrap her head around, and she sees the popular TV series as her last resort to unraveling her daughter’s vanishing.

Although reluctant to take on the case, Laurie is quickly convinced by Sandra’s determination, and she agrees.

With the host of the TV series, Alex—also Laurie’s love interest—as well as her staunch coworkers, Grace and Jerry, the crew sets off for the Grand Victorian Hotel in Palm Beach Florida to recreate the day that Amanda left her future behind.

One of Laurie’s challenges is to gather all of the bridal party at the hotel, interview each on tape, and see what clues might rise to the top. Laurie soon finds out that there are a lot of clues submerged, and slowly they surface, bringing with them insight into who might have been responsible for Amanda’s departure, if, indeed, she did not leave of her own accord.

In the five years since Amanda walked away, many things have changed: her parents divorced; her older sister, Charlotte, took the reigns of the family company; her fiancé Jeff married her best friend Meghan, the maid of honor.

Sandra, furious that Jeff married so quickly after Amanda’s disappearance, is convinced that he had a hand in it. There is, after all, Amanda’s will, leaving her multimillion-dollar trust fund to him—even before they were married.

The groomsmen, Nick and Austin (successful men in their own right), and the bridesmaids, Kate and Charlotte, are all amenable to their interviews. From these conversations, emotions arise, proving there is more to the story as Laurie and Alex dig deep.

Laurie’s father Leo, an ex-cop, and her young son Timmy accompany the crew to Florida, and Laurie soon finds Leo’s investigative skills are an asset, especially when the wedding photographer’s assistant, Jeremy, behaves in a suspicious way. But the questions that arise and are answered, or not, soon focus on Jeff as a primary suspect in Amanda’s disappearance.

Throughout the story Higgins Clark and Burke lay out most of the clues for the reader to follow. Their characters, Laurie and Alex, push and prod trying to get to the right answer and the authors build conflict and raise the tensions to the very end.

The disappointing part of the story is that Laurie, presumably the protagonist, is not the one to save the day. Higgins Clark and Burke effectively leave Laurie sitting on the sidelines while others come to an understanding as to who the true perpetrator is. The truth would probably not have come to light without Laurie and Alex digging like they did, but the fact remains that Laurie did not solve the crime.

The idea of a reality TV show as the basis for the story is interesting but leaves the slight taste of a Hercule Poirot story in which all of the characters sit in a room while the solution is revealed at the end.

In spite of this the story reads well, it moves quickly, and Higgins Clark and Burke fans will enjoy the read.