All the Cowboys Aint Gone: A Novel 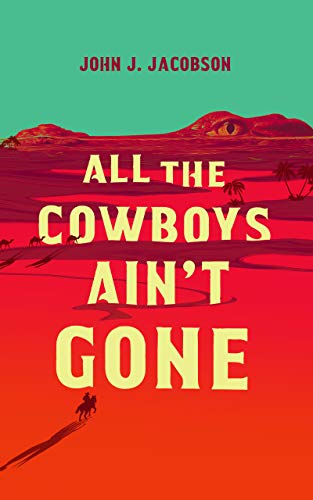 “the kind of story we used to watch at the Saturday Morning Movies, one we hate to see end, and one we’d like to have return again and again in a series of sequels just as funny, exciting, and satisfying.”

Lincoln Smith is a true Texan and proud of it, even if he feels he’s born in the right place at the wrong time. It’s the beginning of the 20th century and all the excitement of the Old West is gone. Lincoln yearns for adventure; like the tales told him by his father, famed lawman Wesley Smith, and in the books he reads.

When Lincoln is 12, his father is killed hunting down an outlaw who abducted the boy and his mother. His body is never found.

Lincoln grows up remembering the stories his father told. After being expelled from Dartmouth for accidentally blowing up the chemistry lab, he and friend, Harry “Stormcloud” Parker, join Bronco Buck Burke’s Wild West and Tranquility Show, portraying Custer and Crazy Horse.

During this time, Lincoln has been corresponding with Anna Flagler, a girl he met while in school. When the show travels to Florida where Anna now lives, he expects a romantic reunion but is chagrinned to overhear the girl ridiculing him to her friends.

“‘I tell you, he’s the silliest boy in the world and acts like he’s in some medieval romance.’”

As if that’s not bad enough, when Lincoln returns to the show, he learns it’s closed and his horse has been hit by a streetcar.

After these three calamities, Lincoln does the only thing his romantically-inclined mind can construct: He decides to join the Foreign Legion.

“What are you going to do?’asked Stormcloud.

‘The Foreign Legion—that’s what I’m going to do,’ he said. “Going to North Africa, to be precise.’

“Well, okay, you lost your job, and a girl made a fool of you—just like I said she would—but aren’t you overacting just a little?’”

Lincoln doesn’t think so. Isn’t that what a man does when his love jilts him and he’s out of work and has nowhere to turn?

Traveling to New York to board a ship bound for France, Lincoln meets up with Jake and Johnny, who call themselves treasure hunters, and are probably con men, but are also Westerners. This common bond draws the three together.

“I want to go to a place where everything is strange and new.’

‘I thought you wanted to go where everything is old,’ said Jake.

“I want to go to a place where everything is so old it looks new.’”

Separated once they arrive on the Barbary Coast, Lincoln meets the Three from Camarón—three men so closely associated they are called Athos, Porthos, and Aramis, after the Three Musketeers. Soon, he’s involved with German spies, a fomenting revolution, a camel driver who wants to be a cowboy, deadly cultists, and Amanda, a young woman with an adventurous heart of her own.

“Further back, during the Renaissance, or at the time of Charlemagne!’”

As his mother said: “‘If things aren’t the way you’d prefer, there will still be plenty of adventures: they’re just going to be different. You’re just going to have to use your imagination to find them.’”

Lincoln doesn’t know it but his adventure has just begun.

For those readers who love the rollicking adventure in Beau Geste and The Three Musketeers, and thrilled to the sound of hoofbeats crossing Romania in Teel James Glenn’s Cowboy in Carpathia—this book is for you!

There’s nothing as exciting as placing a character outside his comfort zone, and describing his reactions. Jacobson does it with a gentle glee that doesn’t ridicule Lincoln’s naiveté or treat his hero as a bumbling simpleton. Rather, he has the young Texan prove extremely canny in spite of finding himself in strange lands.

This is an adventure truly worthy of Dumas, with its own Texas D’Artagnan and the multinational Three Musketeers. While the story has a less heart-clutching ending than that other Foreign Legion epic, Beau Geste, its finale is no less exciting. However, the reader might have wished for a more dramatic revelation of Athos’ real identity. Though most may have seen it coming a mile away, to have this important scene confined to only five sentences is a slight let-down. Perhaps that’s the Texas way, having a Dramatic Moment unfold as undramatically as possible.

All in all, All the Cowboys Ain’t Gone is the kind of story we used to watch at the Saturday Morning Movies, one we hate to see end, and one we’d like to have return again and again in a series of sequels just as funny, exciting, and satisfying.