The Aliens Are Coming!: The Extraordinary Science Behind Our Search for Life in the Universe 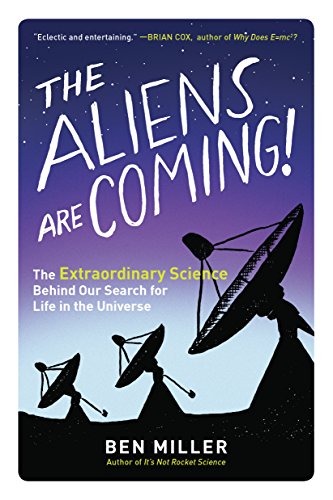 “Is there any question more fascinating than whether or not we are alone in the universe?” asks author Ben Miller in The Aliens Are Coming!. Chatty, personable, and serious in turns, Miller bills himself as a comedian with an advanced degree in physics. Hailing from the U.K. his cultural references do not always translate, but he is charming nonetheless.

The Aliens Are Coming! begins with historical background on the question of extraterrestrial life. Scientists considered the possibility of intelligent life on other planets to be highly likely, “even as recently as the 1960s, many distinguished scientists believed there might be technologically advanced alien societies within our very own solar system, let along the galaxy . . . but I’m here to tell you as the 1970s wore on and our knowledge of the solar system increased, this optimism waned.”

NASA and Soviet space planetary missions showed how inhospitable our solar system is, and by the end of the 1980s it was painfully clear we were on our own. Turning his focus Earthwards Miller’s narrative addresses “extreme” biology, that is, bacteria and microbes that can survive and thrive in extreme conditions such as hot springs at the bottom of the ocean, or survive high acidity, or inside rocks.

You have to know what life is in order to understand where it can be found, and Miller moves from extreme biology to introduce the building blocks of life: DNA, genes, evolution, and Darwin. And then reimagines possibilities. Given the range of conditions where life can be found on Earth, there is still possibility of bacterial life in other parts of our solar system, perhaps microbes on Mars (now or in the past), or in the oceans of Jupiter’s and Saturn’s moons: Europa, Ganymede, Titan, and Enceladus. So too for the rest of the universe, microbes will be more likely than intelligent life. Miller points out the Drake equation, a formula used to calculate the likelihood of life on other worlds, is not a proof of existence.

Despite the unlikelihood, could alien life be out there right now, trying to contact us? Flying saucers were first reported to have been seen in 1947, and in that year, there were so many UFOs reported that it was called “the UFO wave of 1947.” The problem in believing in UFOs is one of distance. The nearest planet Proxima b orbiting the nearest star Proxima Centauri is more than four light years away. Scientists have been left with “Fermi’s paradox”: if intelligent beings are indeed out there, then where are they?

Of the more than one thousand planets that Kepler has discovered so far, only a few have been deemed be capable of supporting life. Kepler detects planets by measuring a dip in brightness of a star as an orbiting planet crosses its face. There are difficulties following up studies of detected planets as Kepler is pointed towards a small region of space (pointed at distant dense clusters of stars) that are out of range of Earth based telescopes. The next generation planet-hunting satellite after Kepler is TESS for Transiting Exoplanet Survey Satellite, and is planned for launch in 2017. TESS will be able to examine a distant planet’s atmosphere on its own.

As for SETI, the question remains as to how will we be able to recognize natural phenomena from a distant intelligence. The discovery of the radio pulsar in 1967 was first attributed to “little green men” by its discoverer, graduate student Jocelyn Bell Burnell; at that time there was no other explanation. In a different search, a “Wow!” signal was detected, (so called because “Wow!” was written on the chart by project volunteer Jerry Ehman) in 1977 emanating from the constellation Sagittarius. The “Wow!” signal lasted 72 seconds, has never been repeated, and contained markers of intelligence that have never been explained.

Today the SETI project titled “breakthrough listen,” is the largest scientific program ever aimed at finding life in the universe beyond Earth. Funded at $100 million, SETI’s board is comprised of famous scientists and billionaires, including Yuri Milner, Stephen Hawking, and Mark Zuckerberg. SETI uses its own purpose-built radio telescope paid for by Microsoft co-founder Paul Allen. Named the Allen Telescope Array (ATA), this SETI site is situated at the Hat Creek Radio Observatory in northern California.

What happens after alien contact? To answer this question Miller traveled to Austria and interviewed UN’s “Ambassador for Earth” at the UN Office of Outer Space Affairs (UNOOSA). To the reader’s disappointment, Miller discovered that the title and office are at best marketing, and the UNOOSA only provides outreach for science and technology.

Miller next presents an overview of cosmology and how cosmology relates to life. He tells us that if the constants of the laws of physics were very much different than what they are, we would not be here to say so—there would be no life at all. As evidence for this assertion, physicists have created computer models of the universe starting from the Big Bang that allow tweaking the physical constants. Their conclusion is that our universe is fine-tuned for life, and call this fine-tuning the “anthropic principle.” Miller asks follow up questions, but does not actually follow up. Asking the reader, Are there different universes with different laws of physics? And is there a “multiverse?”

Given our universe might be due to random chance, Miller gives a brief tour of randomness, statistics, and entropy. On entropy’s place in the universe, Miller apparently goes off the rails, and this reviewer hesitates in considering Miller’s mental state, and was left wondering whether he was joking when he claimed the purpose of life is to speed up the heat death of the universe. Where was Miller’s editor on the writing of this chapter?

In the next section a more sane and sedate Ben Miller greets the reader with the question, So how was the trick done? How do you get from something non-living to something living? He points out the simplest and oldest life forms, the archea, a classification that includes bacteria—non-cell living forms that are neither plant nor animal. What did archea come from? Miller notes advances in the theory of life. Life was earlier thought to have arisen from shallow primordial ponds struck by lightning. Today, life is believed to have arisen from the deep ocean, out of chemical reactions near hydrothermal steam vents on the ocean floor.

Miller continually asks pointed questions that he does not even begin to answer. For example, “[c]ould there be intelligent beings out there whose chemistry is bases on an element other than carbon? Does life even need chemistry at all? Could it take root in a dust cloud, or on the surface of a star? And how would we know if it did?”

Miller next provides a history of life on Earth by geological era, and given the scope, this reviewer expected to see a paragraph or two on today’s global warming. Miller again disappoints; global warming has been relegated to a footnote. And taken all together, the questions without follow up, the pitiable footnote, a glaring lack of illustrations, presence of crude hand-drawn charts, and the rant, this reviewer imagines the author fighting with his editor and publisher. To this reviewer it is now obvious that Miller is trying to do too much, in too few pages, with a too small budget!

Miller, almost sprinting, provides a history of the evolution from single cell to simple multicellular life, to complex organisms, listing names of extinct creatures from the Opabinia, Aysheaia, and Marrella to the Gorgonopsia and Megalopidae noting, “[t]he series of flukes that led to intelligence in humans hardly makes communicable [alien] civilizations a dead cert.”

As to what intelligent alien life might look like, the closest analogs Earth has to alien worlds are isolated islands. One such island, Madagascar is host to the fossa, which looks like a cougar but isn’t in the cat family. Madagascar also hosts the tenrec, which looks like but isn’t a hedgehog. Similar conditions that lead to similar results but follow different paths are called “convergent evolution.”

What can the fossa, tenrec, and the platypus tell us about alien life? Miller writes, “just because a planet is Earthlike, for billion years of evolution isn’t necessarily going to produce anything remotely human . . . On the other hand, thanks to convergence, what comes around, goes around . . . Things like wings, eyes, and teeth will be commonplace on Earthlike planets throughout the galaxy . . .”

As well, intelligence, cooperation, and culture are also not uniquely human traits. From studies, intelligent behavior has been found in chimpanzees, crows, elephants, and dolphins, while bees and ants are known for their cooperative behavior.

Miller poses more questions. How would one code a message meant for an alien life form to interpret? If we were to receive such a message, how would we decode it? Miller attempts an answer through the effort to decode the language of dolphins, recounting a misguided program from the 1960s that led to a graduate student living with a dolphin in a wading pool on the second floor of a house to get the dolphin to speak English. Unintentional animal abuse was part and parcel of the study. Miller states, “[w]hen it comes to close encounters with other species, it’s all too easy to impose our own ideas of how they should think, feel, and believe.”

Miller says, “One of the fun things about this book is that, in examining aliens, we really get to think about what it means to be human.” He identifies significant milestones that mark human intelligence, the alphabet and writing, paper and the printing press, the industrial revolution and computers. However, Miller does not address the dark side of humanity: cruelty, war, poison gas, genocide, and the atom bomb. He does not address the possibility that alien cultures might wish to enslave us, or blow up the Earth to create an interstellar bypass. Miller only indirectly addresses the dark side by asking whether we should be sending messages to aliens at all.

To sum up: On the plus side, The Aliens Are Coming! is a tolerably well written starting point for reader’s own investigations into the potential for alien life. On the minus side, it seems Ben Miller has bitten off more than he could chew. None of the topics in The Aliens Are Coming! are addressed in depth. There are too few illustrations, diagrams are crudely hand-drawn, and at one point the author goes into a rant. And while there is a “further reading” section, there are no references or index.