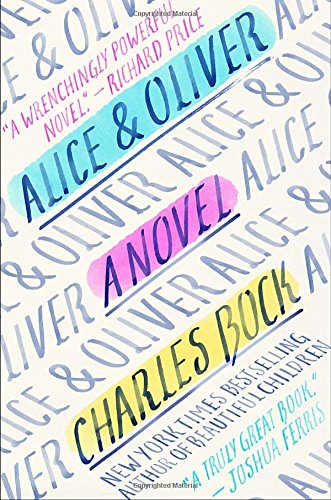 Life threatening crises and their attendant extreme circumstances can bring out the best or the worst in moral character and individual conduct; sometimes they evoke both. Such is the case for Alice and Oliver Culvert, the eponymous married protagonists of Charles Bock’s (Beautiful Children) partly autobiographical second novel, which relates the physical and emotional toll cancer treatment takes on the patient, the spouse, their marriage, and how they face mortality.

In 2009 when their daughter was an infant Bock’s first wife Diana Colbert was diagnosed with leukemia. While she was undergoing treatment Bock kept meticulous notes, and Diana kept a diary, which he did not read until two years after her death in 2011. It took Bock a decade to write his first novel but only a year to turn the texts he and his wife wrote during her illness into this unflinching fictional account in which Alice undergoes a form of cancer treatment consisting of induction—killing the cancer cells with chemotherapy; consolidation—recovery at home from the trauma and resulting loss of appetite and weight from the induction chemo while even stronger outpatient chemo prolongs the remission; and still more chemo plus radiation prior to stem cell transplantation, a procedure that is itself potentially fatal and even more tormenting but the only cure that can halt the induction/consolidation treatment cycle.

If the patient does survive the transplant what nearly kills her does not necessarily make her stronger and may leave her disabled, alive yes, but with diminished quality of life. It is no wonder that some patients decide to skip treatment and go straight into hospice care. Alice’s daughter Doe gives her a reason to endure the treatment and try to live.

In real life Diana underwent two transplants; Alice has one but undergoes four courses of induction and consolidation before a matching bone marrow donor is found. Had she been African American or Jewish rather than white Christian it may have taken even longer to find a donor, and were she not an only child a sibling might have been a matching donor.

Meanwhile Oliver tries to find insurance that doesn’t exclude pre-existing conditions and will cover her treatment, keep the company he founded in business so that they can keep the insurance and earn enough money to pay the premiums, find childcare for their daughter Doe, and be emotionally supportive of Alice.

To create sufficient distance for the fiction to stand on its own Bock changes the time to 1993–94 (which allows a juxtaposition of cancer patients with AIDS patients), the neighborhood of Manhattan in which the Culverts reside from Bock and Colbert’s Gramercy Park to the pre-gentrification Meatpacking District, their names and occupations (from fiction writer to computer software developer and entrepreneur, from yoga and meditation teacher to freelance fashion designer), and the real life Memorial Sloan Kettering Cancer Center becomes the fictional Whitman Memorial Hospital (there is a real life Whitman Memorial Hospital in Washington state, but this isn’t that).

Bock conjures the early 1990s—an era when people called from coin operated pay phones, when computer data was stored on floppy disks, and Microsoft Word competed with WordPress and WordStar—and New York of that era: its graffiti, fashions, music, party scenes and venues. There are also flashbacks to their student days in the 1980s when Oliver hustled apartment rentals without a realtor’s license while in graduate school.

Another difference between Bock and Colbert and the Culverts is that the latter are not intellectuals; they follow popular culture, are avid card players, but at no point in the novel before or during the illness are they shown reading or discussing books for pleasure (excluding the new age versions of Buddhism and Hinduism Alice quotes during her treatment).

Alice first becomes ill during a New England road trip to visit her parents whose family physician immediately has her hospitalized at Dartmouth-Hitchcock Medical Center where she is diagnosed and undergoes her first induction. Doe is switched from breast milk to formula, and after one month Alice is transferred to Whitman Memorial in Manhattan where her New York physician during induction and consolidation, Howard Eisenstatt, warns her of the risk of infection during consolidation, to which she jokes, “Already you are bringing clouds of doom, O Jewish granny. Does this officially make you a yenta? Is that the term?”

The humor provides comic relief to her exhaustion. “‘It’s impossible to explain,’ said Alice, ‘How tired I am of being less than myself.’” To put Alice’s illness in context the text is interspersed with case histories of other cancer patients whose experiences are equally and often more horrific.

Oliver soon learns that their health insurance will pay for induction and consolidation but not for a transplant. In the first half of the novel the dramatic tension derives from whether Alice will survive multiple rounds of induction and consolidation, how soon they will reach the maximum their insurance will pay, whether Oliver can find new insurance that will not exclude her pre-existing leukemia and will pay for a stem cell transplant, and whether a matching donor will be found.

Alice confronts her mortality, and Oliver makes contingency plans to prevent Doe from witnessing her mother’s death. At almost the midpoint of the novel Oliver is able to switch them to a city sponsored health insurance plan that covers employees of small businesses and their dependents that will pay for Alice’s transplant.

While waiting for a donor match and eventual transplant Alice’s condition weakens. With each consolidation she gains back less weight. She experiences temporary blindness. To her visiting mother Alice looks like a corpse. A male patient with whom Alice bonded in the hospital starts stalking her, and Oliver demands an explanation.

“‘Please,’ she told Oliver. ‘We’re getting to a place in this argument where you can be right or we can be married. And I need so badly to be married to you.’”

Despite its tender moments Alice and Oliver is not appropriate material for a Lifetime or Hallmark movie. But as unsentimental realist fiction at its starkest it would make a raw, gritty HBO miniseries, and is strongly recommended to fearless, emotionally resilient readers who enjoy well-crafted prose.