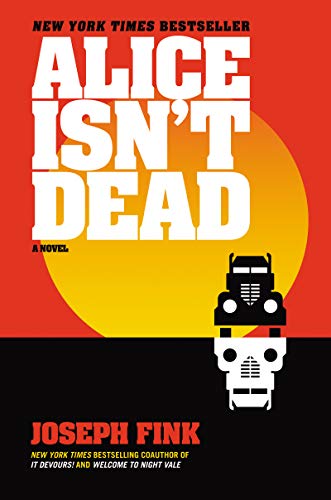 It’s always the best horror that pairs itself with the comforting aspects of day-to-day life. To believe the incredible the reader must first connect with the mundane. The ratio of each can be incredibly tricky as too much of one and readers have no hook, while too much of the other and readers are ungrounded. Alice Isn’t Dead walks that line perfectly, blending a horror/thriller storyline into a story about relationships, and anxiety, and the universal human quest for the divine.

At its heart Alice Isn’t Dead is a road trip novel about a woman searching for her presumed-dead wife. Fink’s familiarity with the rest stops and trucker havens of Americana shine through the basic, easily digested prose. Readers will have no problem connecting with the (sometimes surprising) descriptions of rest stop bathrooms, ancient gas stations, and decrepit buildings. As the plot expands it is an easy move from mundane road trip nostalgia to something sinister—something perhaps we all suspect but have rejected as too silly to talk about.

Alice Isn’t Dead preys upon this “silliness,” these irrational little fears, and uses them to build a compelling tale of good versus evil. While the foundation of the plot and its themes is nothing new and will likely remind readers of any number of mainstream horror writers, there is a freshness here borne from the simplicity of the tale, the feeling of the road, the #ownvoices descriptions of anxiety and perhaps most importantly, two women who are simply allowed to be in love without having to define or prove the validity of their relationship.

There are too few of these sorts of novels in the world, where queer people get to have clichéd adventures against the same worn-but-still-exciting backdrops that persist in fiction. There are too few novels where the queer people are not there to drive the plot of other characters or where their stories aren't centered around coming out, or bigotry and intolerance. While Alice Isn’t Dead will have wide appeal across horror and thriller readers alike it will likely find its best home within the queer community as part of the growing number of novels where queer protagonists take center stage in an otherwise mainstream slice-of-life novel.

In an otherwise smooth and compelling read the only stumbling blocks came around some of Keisha’s language. Phrases like “anxiety bros,” used between Keisha and a teenaged girl, were out of place and felt like male gaze being imparted upon a female point of view. Noting that this book originated as a podcast it is entirely possible that the backstory for some of the more male-oriented language never made it through the adaptation process, however its potential omission hurt the credibility and authenticity of the female-driven cast.

There were numerous opportunities were Keisha’s personality could have been extended and developed. While her relationship with Alice does get adequate page time in the back half of the book, the two main characters remain partially two-dimensional. This works in the context of the story and the writing style but does result in harder than normal “kickback” during scenes where readers must take a peculiarity on faith—such as two women, one of whom is a lesbian—referring to themselves with masculine identifiers.

Fans of black and white good-versus-evil tropes, road trip stories, and slow burn horror will delight in Alice Isn’t Dead. Those in the queer community looking to see themselves mirrored in mainstream fiction without the trappings of “queer pain” will also be well served. The book is an easy, well-paced read with a smooth plot and characters you can’t help but root for.