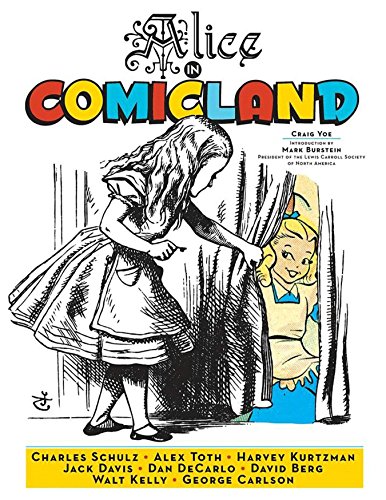 “Sure, it’s art, but is also great reading. Which is what makes the best of comics so much fun.”

Sure, it says Alice in the title. And that title sure sounds like Alice in Wonderland by Lewis Carroll. But what the heck are Superman, Charlie Brown, MAD magazine, Pogo and Albert the Alligator, Walt Disney, and Archie doing in these pages?

Alice in Comicland brings to light the rich and very deep connection between the Alice in Wonderland stories by Lewis Carroll, comics, and comic books. Gathering art and stories from over 100 years of comic book history, the title reminds us of the deep connective link between the Carroll’s richly imaginative tales, children’s literature, and art.

The anthology showcases the many ways that Alice has appeared in comic books over the years. From parody to tribute to the occasional reimagination of the original work, comics have long drawn from the well built by Carroll.

From the earliest days of the book, illustration and art were an integral part of Carroll’s stories. When he created an early edition for the real Alice as well as when he began writing the book for actual publication, Carroll himself did drawings to both work as a guide and to accompany his writing.

As both he and his publisher realized the limitations of that original work, the author suggested noted political cartoonist John Tenniel. The artist had risen to prominence though his illustrations and comic artwork for the humor magazine Punch. The tradition of Alice, art, and sequential art was established early.

No page brings that early connection to light better than seeing the first appearance of the strip Alice in Funnyland from the November 10, 1901 edition of the Chicago Tribune. Seeing this page reproduced so clearly and in such detail sets a standard of quality that continues across every page of the title.

In his introduction Mark Burstein, President of the Lewis Carroll Society of North America, outlines this deep connection that the story of Alice holds to the world of comics.

Profusely illustrated, his writing even features an early drawing of Carroll’s from around 1850 that utilizes word balloons! He also argues convincingly for the status of many of the works that have been chosen for inclusion as art, not work that should be so easily dismissed as “comics.”

The book Alice’s Adventures in Wonderland has had countless adaptations in film, with creators often merging the original with the sequel, Through the Looking Glass. It has been adapted for the stage and even inspired Tom Waits to write his own operatic adaptation for the stage titled simply Alice.

Alice’s numerous appearances in comic books somehow has avoided the prestigious adjective of “art.” Editor Craig Yoe and Mr. Burstein have gathered a wide range of stories, each holding a direct connection to Carroll’s work that makes a strong case that comics and comic books be recognized as the same.

When you look at the work of artist Walt Kelly, best known for the creation of Pogo and the residents of Okefenokee Swamp that Yoe has chosen for this collection, it is hard to argue that what he has created is anything less than the best that the medium can be.

Kelly’s own short take on the original work in From Lewis Carroll’s Through the Looking Glass, seen here in the original artwork, is as close to the high quality that Tenniel original brought to the story as any one artist can possibly hope to come.

The questioning look that Kelly brings to Alice’s eyes when Humpty Dumpty demands that she sit and listen to a story is exactly the same as the look that every child who has ever lives gets when they are forced to do something they don’t want to. He was a storyteller for all ages.

The fact the many of Kelly’s pages on this story have never been published before only enhances the specialness found in this exquisite volume. A second piece by Kelly, Mother Gooseberry’s Rinds from Pogo Possum #10 (July–September 1952) brings the possum and alligator into the story as Albert reads the nonsense poem “Jabberwocky” in such an expressive way that both he and the words come to life on the page before you.

Carroll’s work has long been ripe for tribute, inspiration, and parody. One of the greatest pieces included in this anthology is taken from MAD #18 (December 1954). With storyboards by Harvey Kurtzman and pencils and inks by Jack Davis MAD dissects Alice and at the same time expertly pays tribute to Tenniel’s original style.

As it is MAD, it is only reasonable that Bugs Bunny appears as the March Hare.

Adding adaptations of the original from long forgotten titles such as World’s Greatest Stories #1 (January 1949) or Little Max Comics #69 (March 1961) reminds us of how many ways the original stories can be reinterpreted.

It also provides context for shifting artistic styles in both media and comics while at the same time showcasing forgotten artists such as Chad Grothkoph and Warren Kremer (Little Max). Both add qualities that seem to incorporate Tenniel, animation, and advertising into something that creates new worlds for Alice.

Given that Alice falls into a cave, deals with wild, bizarre and unknown strangers on a regular basis, moving the storyline into the realm of horror isn’t unimaginable. Alice in Terrorland, from Lost Worlds #5 (October 1952), features incredible art from legendary Alex Toth while adding a modern take on the work.

From the Cheshire to the March Hare, Carroll worked in a tradition of storytelling that reaches back to the days of Aesop and his legendary fables. It also connects him to a possum that walks and talks and an alligator that reads his poems.

Sure, it’s art, but is also great reading. Which is what makes the best of comics so much fun.