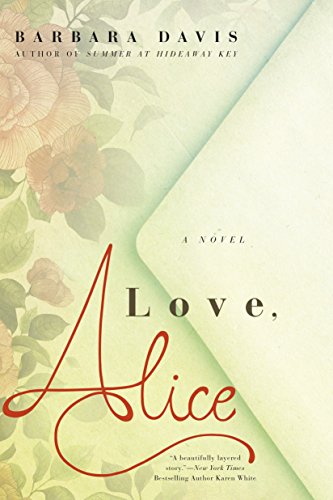 “a novel that’s many cuts above its genre.”

Love, Alice is a classy page-turner that flows as smoothly as a chocolate milk shake but unfortunately relies on too many contrivances.

First, the protagonist —Dovie Larkin, a beautiful, young art museum curator in Charleston, South Carolina—just happens to be given a thick set of letters that a pregnant, unmarried English teenager wrote from 1962 to 1969, spelling out her entire life story.

Even worse, the reader is supposed to believe that the otherwise intelligent Dovie doesn’t see the obvious clues to two crucial relationships that most readers will figure out in at least 126 and 47 pages, respectively, before their Big Reveals.

If those ground rules are accepted, however, the reward is a multitude of plot twists with a cast of intriguing characters, deftly interweaving related stories of guilt and the passion of a mother’s love.

“There isn’t anything I wouldn’t do to protect that little boy up there,” one mother says, “because he’s mine and that’s just the way it works.”

As the novel opens, Dovie is still mourning the suicide one year ago of her fiancé, a sculptor named William Prescott, just two weeks before their wedding date. She eats lunch at his gravesite every day and brings fresh flowers every week.

“His father’s bourbon and his mother’s sleeping pills,” she thinks. “No note of explanation, no clue of any kind as to why he’d chosen death over the life they’d planned together.”

Her obsessive grief has not only turned her into a near-hermit socially, but it is also jeopardizing her job, as she keeps missing appointments with one of the museum’s top benefactors, the playboy-heir Austin Tate.

Then, during one of Dovie’s cemetery lunch breaks, an old woman with “a slow shambling gait” and clothing that looked “as if she’d just stepped out of an old black-and-white film” appears at a neighboring graveside monument. Known as Alice’s Angel, the monument is dedicated to Alice Tandy, a maid to the Tates who died 36 years earlier, at age 23, and who has become the butt of local gossip ever since.

The old woman is Alice’s mother, Dora. When Alice had become pregnant at age 16, Dora sent her away to a strict Catholic home for unwed mothers, the kind of “Magdalene laundry” made notorious in the movie Philomena. After being forced to give up her newborn, Alice had vowed to run away, find the baby, and never speak to Dora again.

Now Dora is searching for Alice, with the same passion that Alice sought her own child.

Through Alice’s determination and an amazing string of luck, she in fact was able to trace the child to Charleston. And just which house in Charleston? Okay, it may be understandable that Dovie wouldn’t see the clues as quickly as a reader will, because she doesn’t read her life the way a reader does a novel. But when the household name is spelled straight-out in one of Alice’s letters, Dovie still has no reaction.

It’s even more ridiculous that Dovie plods along cluelessly as hint after hint about William’s secret troubles is thrown at her. In this case, she certainly should figure things out faster than the reader, because she has information that’s withheld until later in the novel.

Austin, for instance, is a teetotaler, not the usual boozer. His mother, Gemma, who in the novel’s present time seems almost too weak to handle even a charity luncheon, was once a laughing, girlish mother, “happier in her garden than just about anywhere else, up to her elbows in the Carolina soil.”

The writing flows well enough not to drag down the plot, although it too often risks stumbling on clichés. Characters make beelines, struggle to get bearings, have lumps in their throats, and experience “an uneasy pang of déjà vu.”

At moments, though, Davis comes up with sharp, beautiful phrasings. In a bust that William carved of her, Dovie sees “the come-hither tilt of the head, the long, sinuous line of neck and collarbone, the barest suggestion of breasts and the shadowed valley between.”

Ultimately, the stories of Alice and Dora, Alice and her lost child, Dovie and her mother, and several other mother-child pairings nicely echo each other to create a novel that’s many cuts above its genre.