Alex's Wake: A Voyage of Betrayal and a Journey of Remembrance 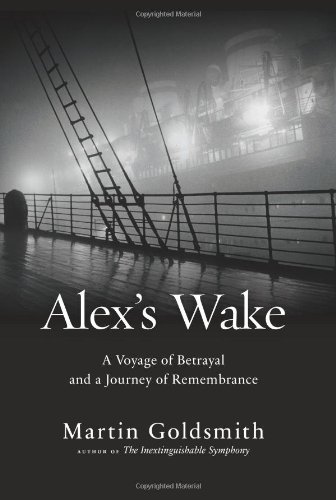 “Have we any benefit from watching those innocent souls that we rejected murdered in the gas chambers of Nazi Germany? Given a similar situation, would we once more send refugees back to be murdered by despots? This is the potential benefit from reading Alex’s Wake. We can learn from the mistakes of history and vow to save refugees from genocide.”

“Late one night it came to me what I must do. I knew that I needed to retrace their steps, to set foot on the earth they trod upon during those final three years of initial hope and eventual hopelessness; to see what they saw and to breathe the air they breathed before they breathed their last. I would tell their story as a grandson, a nephew and an eyewitness.” —from Chapter One, Alex’s Wake

On May 13, 1939, the MS St. Louis sailed from Hamburg loaded with Jewish refugees eager to escape from Nazi Germany. Denied access to England, Ireland, Canada, The United States, and Cuba, the ship’s passengers were returned to Europe, where most were captured and sent to Nazi concentration camps and eventually Nazi death camps. Alexander Goldschmidt (Martin’s paternal grandfather) and his son Helmut (Martin’s uncle) spent three years in six different concentration camps before eventually being murdered at Auschwitz-Birkenau.

In Alex’s Wake: Voyage of Betrayal and a Journey of Remembrance, Martin Goldsmith details his contemporary six-week quest to retrace the journey his grandfather and his uncle made from the SS St. Louis to Auschwitz.

Martin has felt guilt for many years because his father escaped Nazi Germany to America, yet his father did almost nothing to try to save Martin’s grandfather (Alex) and uncle (Helmut). The guilt generated by the inaction of Martin’s father must certainly have become a stone upon his heart. He carried this silently, never discussing it. We now see that the guilt has traveled into another generation, cementing itself in the psyche of Martin.

Possessed and motivated by this guilt, Martin is compelled to retrace the steps of Alex and Helmut, from the St. Louis through each Nazi concentration camp and all the way to the place of their murder. The desire to assuage this guilt is Martin’s pure motivation. With his wife in tow, Martin launches a contemporary crusade to experience the terror and hope for redemption that his ancestors experienced decades before.

This year marks the 75th anniversary of the doomed voyage of the MS St. Louis. Martin’s journey and book offer a new perspective on the Holocaust; one that is typically missing from most books and films about the Shoah.

Alex’s Wake is two stories, coupled together by familial love and by the motivation to connect love across time and distance. Here we have the story of a father and his son, trapped within the iron gates of Nazi Germany’s genocide against the Jewish people. Another story is irrevocably attached, which is the story of the Holocaust victim’s grandson whose guilt incited by his own father’s inaction motivates a need to retell the story by retracing the steps from the St. Louis to Auschwitz.

Psychiatrists posit that the most powerful human emotion is guilt. Humans are constantly buffeted and motivated by all types of guilt. In this case, Martin has summoned and acquired the guilt of his father, who failed to save his own father and uncle. He hardly tried to save them.

Just as Martin’s grandfather and uncle breathlessly attempted to escape from clutches of Nazi Germany, Martin’s father ran from his responsibility to try to save them by helping them immigrate to America. The guilt from Martin’s father’s failure drips like poison into the soul of Martin, who absorbs the vile psychological substance. It permeates his emotions and casts a pall upon his life. Martin’s emotional life now depends upon his ability to retrace the deadly voyage of Grandfather Alex and Uncle Helmut. He must find a way to reach back into a deadly past and recapture his soul from the guilt of his father’s inaction.

Alex’s Wake is a powerful memoir of the most ghastly event in human history. Alex’s Wake sheds far more light upon the failure of Allied nations to save those poor, helpless Jews who had escaped Nazi Germany. Instead of granting these innocent families a new life in a free nation, the Jews aboard the St. Louis were denied entry by each nation along its doomed journey.

England, Ireland, Canada, The United States, and Cuba all rejected the ship of hope and its cargo of human misery—even though their leaders knew that the passengers of the SS St. Louis would become genocide victims. Anti-Semitic leaders in the U.S. State Department persuaded President Roosevelt to deny entry to the passengers of the floating refugees, even though the small number of Jewish families could have been easily assimilated into any region or city of America.

If there is any lasting guilt to be measured from this accurate and heart rending book, it must fall upon the governments and the political leaders of the Allies, especially The United States and Cuba. Imagine how it must have felt as a Jew in 1939 to have barely escaped the murderous clutches of the Nazis, only to be rejected by almost every other “free and democratic” nation and sent back to Europe to be murdered. If Martin had to live with the guilt passed down from his father who failed to save his own father and uncle, then the guilt of the civilized world who rejected entry to these escaped Jews must remain far more intense and permanent.

Can the world learn from such a disaster? Have we any benefit from watching those innocent souls that we rejected murdered in the gas chambers of Nazi Germany? Given a similar situation, would we once more send refugees back to be murdered by despots? This is the potential benefit from reading Alex’s Wake. We can learn from the mistakes of history and vow to save refugees from genocide.

Goldsmith is an excellent writer. Alex’s Wake is a powerful and evocative memoir. Each chapter offers insight into the history of the Holocaust in each place that Martin’s ancestors traveled, as well as a description of the contemporary location in Europe. The book contains many photos that help the reader delve more deeply into the tale.

Alex’s Wake is a powerful book containing two very important stories. The primary story is the three-year journey of Alex and Helmut leading to eventual death. It is also the story of the author’s guilt, carried forward from his father, who failed to save his blood relatives on the St. Louis. In fact, he did very little to try to save them at all. The secondary story is the very same road traveled, through the same towns and cities, by the contemporary author.

At issue here is the salvation of the soul of the grandson of Alex, our author. Frozen in time by the guilt his father had passed along, Martin must retrace the steps of his ancestors in order to find a way to say, “I’m so sorry. I love you, even if I did not know you. I will love you and remember you forever. My father did not save you. But I am here now to understand your agony and to bless your sacred memories.”