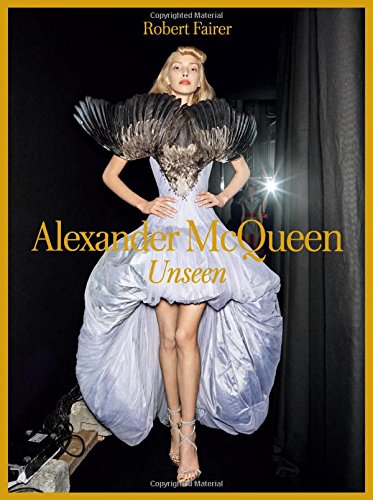 As any habitué of the fashion circuit will tell you, the most excitement happens off the catwalk and not during that 10 minute over the top display of a fashion designer’s latest collection. In addition to that is the fact that what passes you on the runway is never quite the same as seeing it up close and personal in a backstage situation. The photography of Robert Fairer affords the reader a perspective that few will ever experience firsthand.

Unquestionably the photographer follows in the footsteps of Niall McInernery, whose backstage and behind the scenes photography were nothing short of love at first sight for those who are enveloped in the world of fashion.

Claire Wilcox provides a short explanation of each collection—which gives the reader context, the narrative for each collection, and lastly, the particular traits and idiosyncrasies that McQueen employed with each new collection. The text is just enough as it sets the stage for the photos that follow.

The book is presented in chronological order, which should elicit the feeling that you are witnessing the evolution of a designer and a revolution within the fashion world. Being able to read this book in one sitting certainly created a crescendo of emotions as the designer developed and matured with each new season’s offerings. The images are first rate, the reproduction quality is as well, and once you finish this monograph, you will feel the loss that fashion has suffered by McQueen’s untimely demise.

Of special interest is the timing of the release of the book as it comes at a crucial span in the fashion compendium. Fashion is somewhat in flux, and Fairer has shown and reminded us what true and unbridled creativity is not just hype, front row seats, and Instagram. McQueen was the real deal who backed up his inspirations; he delivered the goods. His talents were on display each season and his rhetoric played second fiddle to his end result. Fairer has made this blatantly apparent to any reader who understands the concept of the art and craft of fashion.

Alexander McQueen: Unseen is a must for those who revel in the glories of fashion and those who possess indescribable abilities that allow them to translate those talents into tangible objects. The book is a reminder to all of those in fashion what a loss we suffered and will offer the uninitiated reader a glimpse into a world that was and dwindles each new season.