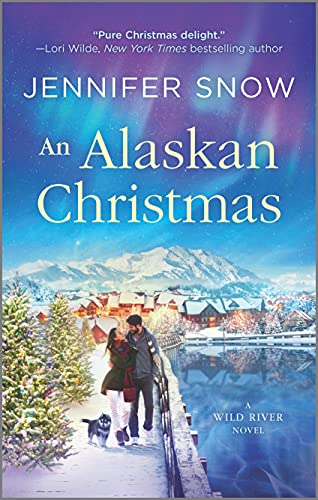 Surgeon Erika Sheraton's life consists of working 18+ hours a day at Alaska General Hospital. Since her mother's death from rejecting a kidney transplant years ago, Erika's followed in her physician father's footsteps, trying hard to attain his approval. But her dad, unable to handle his wife's passing, closed himself off from her and everyone else, making his career and the hospital his focus. Now Erika is partnered with him beginning a clinical trial for a new anti-rejection drug for transplant recipients.

It’s a few weeks before Christmas, and her father informs her she is on a “recommended vacation,” meaning she has no choice, as he's afraid she is getting burnt out. She doesn't want to leave; what will she do for the 14 days she's practically being banned from the hospital? With no choice, she considers it's time to reconnect with her best childhood friend, Cassie Reynolds, who lives in Wild River, Alaska, a few hours away.

Used to having a hectic life, Erika wonders what she'll do, especially seeing Cassie is busy with her own company, Snow Trek Tours. When Cassie takes her to the local bar, she is surprised to see Cassie's brother Reed working there. What happened to the scrawny kid she once knew who is now filled out into a ripped and gorgeous man?

Erika remembers how long ago they were like oil and vinegar and got on each other's nerves, so she is dumbfounded by her instant attraction to him. Though upon reconnecting after such a long time, they still clash. Reed determines she is a stuck-up snob, and she wonders why someone with his smarts is tending bar.

They say opposites attract, and this seems to be the case with Erika and Reed. As they spend more time together, Erika identifies Reed as an upstanding guy, and as he is the leader of a search-and-rescue group for skiers and others who get lost in the mountains her admiration for him heightens. What is surprising to them both is the attraction is mutual. For a woman who rubbed Reed the wrong way since childhood, he can't take his mind or his eyes off her. And, Erika who doesn’t think about men or dating, is now changing her mind in that respect.

Erika is thrilled when Reed allows her to go with him on a rescue mission; however, he is angry when they locate the injured skier and Erika jumps in to help. She is not supposed to assist in any way, but when she saves the man's life, Reed thinks differently about her.

Erika also observes Reed at work and how professional he is. Even though he always wanted to be an EMT or a nurse, she ponders what circumstances are keeping him from doing what he wanted and remaining in their hometown.

Her admiration for him grows exponentially as does his for her, and before long the two are between the sheets. Never being in love before, Erika considers if she could be, or is this only lust? Reed has had many affairs, but his feelings for Erika are much different from those for any other woman.

One day while out on the slopes together, Erika believes what they have is only a friendly fling, and she says to Reed, "But you said we were just friends."

"'We are . . . but . . .' Her eyes couldn't decide where to look. His crystal blues held a question she didn't know the answer to and his full, pink, wind-chapped lips beckoned. He'd looked so sexy racing down each new, slightly more challenging slope. The unexpected intimacy that came with taking on these challenging trails had her struggling to resist the urge to touch him, kiss him all morning. The short helicopter runs back to the top of the mountain had never felt long enough, yet with each one, new undeniable sparks had gone off between their bodies."

Could this become serious or permanent? Erika is stubborn and involved in her job at the hospital, and Reed will not give up his current lifestyle, making them wonder if a long-distance romance would work after Erika leaves.

"Their personalities couldn't be more different, but they were a lot more alike than either of them would have predicted. Alike in ways that mattered . . . ways that just might be enough for a relationship to survive."

This first title in A Wild River series is passionate, sensual, and very sexy. The freezing, winter-cold portrayal of the Alaskan ski slopes is not the only thing sending chills through one's body as Erika and Reed's connection heats up.