Al Schmitt on the Record: The Magic Behind the Music 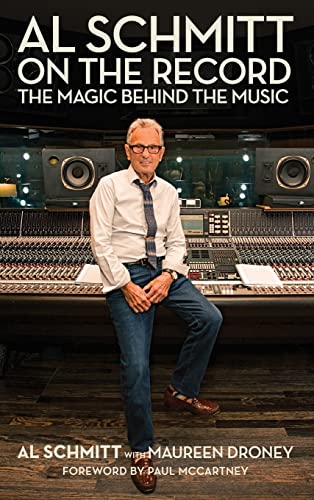 “This is a book for a recording enthusiast seeking a breezy discussion from a producer whose art was forged in a bygone era, but whose skills should be preserved for when big studios and big orchestras are again in fashion.”

Heavy listeners of adult contemporary music, or those who grew up in the big band glory years of Sam Cooke and Henry Mancini have heard Al Schmitt’s work echoing through the speakers. He was that old-school music producer whose image is now more often found in films than in the actual studio: the producer capturing multi-piece orchestras, horn ensembles, and string quartets in big rooms where all the takes are live, a thing unknown by many today who track to DAWs in small spaces.

Al Schmitt on the Record: The Magic Behind the Music documents Schmitt’s 40+ years in the recording industry. Schmitt’s voice is informal, relaxed, and conversational, his experience and advice welcome. Al Schmitt on the Record will appeal to recording connoisseurs eager for insight from a great producer, and fans of Schmitt will get insight into several of the artists he has worked with which include Jefferson Airplane, Diana Krall, Bob Dylan, and Frank Sinatra to name a few.

Dividing his book into three rough sections—the early years, techniques and advice, the artists—the most rewarding section may be Schmitt’s advice for being a successful producer. A big takeaway is Schmitt’s insistence that tools like EQ and compression should not be used in the recording process. Copious articles, interviews, and YouTube posts contradict this position, so it helps to understand how Schmitt achieves his depth of sound without applying these common tools. “Everything was done with mic placement,” he says.

Instead of EQ, Schmitt will move the mic around until he gets the sound he wants, or he will use a different mic for brighter or darker tones. “The best signal path is often just the microphone, preamp, and faders,” he adds, noting that “changing the EQ of one element changes its relationship to everything else that’s in proximity to it.”

This statement is an aha! moment because it forces one to consider all the instrumentation in a song instead of maintaining a myopic focus on the single instrument one is mic’ing at that moment. While Schmitt favors high-end mics like the Neumann’s—U67, M49, and the iconic “Frank Sinatra” U47—that are likely outside the budgets of many, he has recently been enamored of more affordable mics that capture Schmitt’s pristine clarity of sound: Audio Technica 5045, Mojave MA-300, and Royer ribbons.

Leading out of this section, Schmitt offers industry advice, and while there isn’t anything here that hasn’t been said or printed before, its reinforcement by a Grammy-winning producer gives the advice a certain heft. A few choice suggestions include to stay in the background during sessions, own your mistakes, and his funny—always “smell good.” That is excellent advice in the studio and especially in the tour van!

When musing on his success he includes traits such as having enormous confidence and loving the music as key ingredients, but he doesn’t belabor any points. Throughout Al Schmitt On the Record, his points are succinct. Even in his artists’ section, most are related in a just a few paragraphs, almost as if ready-made for a blog. In a closing section, Schmitt skirts over his struggles with addiction, and while no specific episodes are related, he does attribute his sobriety as a chief reason for his success.

Al Schmitt on the Record may disappoint those seeking gossip-variety stories about his work with musicians and bands, but this is not a tabloid expose. Schmitt withholds details, leaving his stories about Diana Krall or Jefferson Airplane or others floating in vague suggestion. Often Schmitt will assess his relationship with an artist as “great” and that they are “good friends,” adding that you “need to listen to” such and such album, but he isn’t pushing beyond that.

Publishing stories that artists do not want made public could have been a career ending move by Schmitt. There is a code between artists and producers that, while not written, can be as binding as lawyer and client. Schmitt is still making records and doing seminars such as the highly popular Mix with the Masters series, so a break in trust would have undermined the integrity Schmitt has acquired since his start in the 1950s. And while that decision may limit the book’s appeal in some ways, the move keeps Al Schmitt on the Record as a narrative of man whose deep passion for music spills out.

The book’s publication by Hal Leonard, a company known for its instructional publication, also boosts the work as guide to making music and less as an exploitive, juicy narrative. This is a book for a recording enthusiast seeking a breezy discussion from a producer whose art was forged in a bygone era, but whose skills should be preserved for when big studios and big orchestras are again in fashion.