Al Capp: A Life to the Contrary 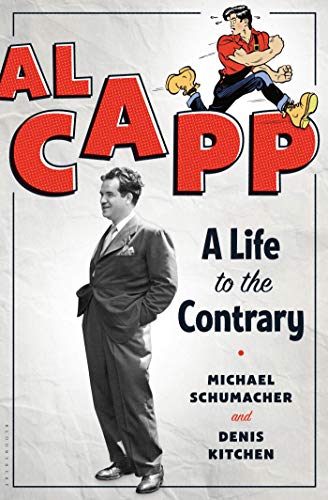 “Li’l Abner [was] a joyful bumpkin who lived in a world that both reflected and refracted what America was like . . .”

Given his success, how come the name of Al Capp seems to have disappeared from the American landscape? After all, his creation Li’l Abner is still fondly remembered. The strip itself is often critically lauded as possibly the best American newspaper comic strip ever produced.

Li’l Abner even appeared on a USPS stamp honoring the 20 greatest American comic strips ever. At its peak Li’l Abner was read by at least one third of all Americans and appearing in well over 800 newspapers in America alone.

Al Capp changed what Americans could expect to find in their daily newspaper comic section. Before Abner no comic artist had ever done a continuity-based humor strip. No comic strip had ever been based in the South or featured rural humor. Satire and innuendo had seldom, if ever, been featured in a daily strip. No one had ever drawn women like Capp had and gotten away with it like he could: with a smirk and an innocent smile.

His fame, an aspect of his success that he loved and courted openly, was unprecedented for a cartoonist.

But why is Capp himself so forgotten? After all, the changes he brought to the comic medium influenced generations of cartoonists. His art is still considered a benchmark in comic achievement, his word play likened to that of Mark Twain.

Because, as authors Michael Schumacher and Denis Kitchen have so brilliantly and impartially documented, Al Capp wasn’t exactly a nice guy.

And that is putting it mildly.

When his faults finally became public knowledge, when his venality, his womanizing, his arrogance, his hubris, and his open and often public cruelty to others became known, Capp’s downfall was complete and humiliating.

The authors expertly create a detailed picture of a man’s life that knocks at the door of Greek tragedy. Step by step they build to his incredible success. Inch by inch we watch amazed as it all begins to fall apart. Ultimately the story that Mr. Schumacher and Mr. Kitchen so finally craft is undone by their subject’s inherent faults.

Given that his eventual descent into oblivion and bitterness is his so clearly his own fault, at the end you cannot even feel sorry for him.

As Mr. Schumacher and Mr. Kitchen take us through Capp’s life, hints of the artist’s true nature begin appear early on. As a kid Capp was so offended by the way his brother ate soup that their mother banished the offensive sibling to another room lest Al lose his temper.

The loss of his left leg at age nine surely changed his life. Limited in his movement, and suffering from pain that would plague him the rest of his life, Capp dealt with the loss by becoming even more sullen and moody. Over the years his temper would grow into a brashness and certainty about who Alfred Caplin really was. (He changed his name for good when Li’l Abner was born).

A gifted storyteller, Capp was full of confidence that helped propel him through several art schools until he found himself in New York looking for work as a cartoonist.

Employed by Ham Fisher, the creator of Joe Palooka, Capp bristled at the confines of being employed by someone else and worked hard at developing his own strip. When he left Fisher the two parted as friends, but it was a relationship that would alter dramatically as Li’l Abner rose up the ranks in comics.

Capp loved confrontation and seemed oblivious to the effect it had on others. His very public feud with Fischer is legendary. The results of this feud were disastrous for both men. When the inevitable happened, Capp didn’t exhibit a shred of sadness at the conclusion—in fact, he seemed to revel in Fisher’s unfortunate choices.

Despite his faults, Capp did have good points. He worked tirelessly during the war to help disabled soldiers understand that their own lives would continue. When comic strips and comic books were being attacked in the early fifties he used his razor-sharp wit to argue against the lunacy of that attack on the medium he loved. He employed family members and to his eventual regret, tolerated their inability to manage his companies.

Over the years the joyful nature of the satire in Li’l Abner began to change. By the sixties he was openly mocking the new generation. He became a staunch supporter of Nixon and his White House. A longtime presence on TV, he skewered the naiveté of American youth while flicking the ashes of an unfiltered cigarette into an ashtray.

Then the sex scandals hit, the details of which convey the ugliness of sexism and the rancid, uncaring nature of Capp’s soul at its worse. From a well-documented attack on Goldie Hawn to being brought up on charges of adultery, exhibitionism, and sodomy (a decade later what Capp did would have been described by one word: “rape”), Capp disappeared overnight from the American landscape.

He died a lonely, bitter, angry man. His family was a source of massive disappointment to him. The country that once embraced him so warmly ignored him. In a final irony, the earlier loss of his former employer Fisher was silently mirrored by his daughter’s own passing.

Still, for all his faults—a few of them honestly forgivable (to their eternal credit the authors make no case that they are)—we are left with Li’l Abner, a joyful bumpkin who lived in a world that both reflected and refracted what America was like for a few decades.