Ahead of the Curve: Inside the Baseball Revolution 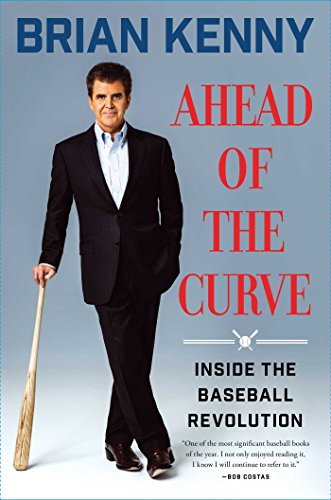 Brian Kenny’s book, Ahead of the Curve: Inside the Baseball Revolution, borders on heresy. As a devout sabermetrician, Kenny attempts to convince his readers that baseball players should be valued based on an esoteric collection of mathematical formulae. Kenny knows his numbers well and demonstrates his fluency in applying the algebraic rubric.

His problem, however, is two-fold: either Kenny misjudges the essence of baseball or he has become so enamored with fancy modern statistical measures of performance that he thinks all observers of the game must apply them. In the process, he demolishes much that we have learned about the National Game since childhood.

There is no question that Kenny is good at what he does. He is a studio host for MLB Network and a presenter on NBC Sports Radio. He previously worked ESPN’s 6 p.m. edition of SportsCenter. Kenny is a talented sports media personality. He writes extremely well and is well versed in baseball history.

Kenny sees baseball as an enormously important element of modern life, perhaps as significant as climate change or health care. Baseball is a vital part of American life, but it is much more like movies, music, plays, and art. It is not a matter of life or death who wins the Most Valuable Player award each season. Baseball is entertainment. The men who play this game at the highest level are tremendous athletes, the very best in their field. If we use incorrect measures to evaluate their performance, the world will not fall apart.

Modern statistical measures popularized by Bill James and his flock of avid followers are really fascinating. Much of Kenny’s criticisms are old news, but still right on point. For example, ranking pitchers by their won-loss record is absurd, because wins and losses depend substantially on team performance, not individual pitcher performance. There are better measures of pitcher performance, such as earned-run averages and strikeouts versus walks.

The problem with the sabermetric alternatives and their far more sophisticated mathematic approach is that most fans have been weaned on the outdated and admittedly incorrect measures. It will take more than this very fine book to convert the masses.

Kenny would go further in his crusade. He would abolish the “win” statistic credited to a pitcher. In fact, he suggests that it would be better for a manager to use “bullpenning” to pitch a game. Start with a really good relief pitcher, because teams often score the most runs in the first inning. Then follow with a “long reliever” who used to be a starter. Change pitchers after a few innings and have a parade of hard-throwing relievers finish off the game. There would be no “closer” who sits on his hands until the ninth inning. Any relief pitcher can do that job.

Kenny correctly argues that the dominant offensive statistic—the batting average —should be ignored because it is grossly misleading. A single and a home run both count the same when hits per at-bat is calculated. Slugging average, which considers the number of bases (one for a single, four for a homerun) per time at bat, is slowly finding its way onto ballpark scoreboards. The more sophisticated sabermetrics offensive formulae are absolutely engaging, but only marginally understood by the baseball media and the public.

It is understandable how a splendid baseball person can become enamored with clever statistical measures. Baseball is unique among the major team sports in being able to compare eras of the game and the players who play at the same time. Was Babe Ruth as good as baseball historians believe? (Indeed, he was.) Are all players with plaques in Cooperstown worthy of that honor? (Most were.)

The additional (and likely better) measuring tools provided by sabermetrics allow observers to reach more informed judgments. Once you learn how to manipulate these algorithms, it is hard not to fall in love with them. Kenny is proficient, and his book is a paean to this better way.

Kenny’s book is an invaluable tool for those involved in baseball operations— known in the trade as “baseball ops.” Every club now employs dozens of analytic experts. (Bill James, the “Godfather,” has long been employed by the Boston Red Sox.) No team should spend millions on a free agent because he “looks good.” He has to play well, as projected by every available system of analytic measurement.

Baseball is many things to many people. For some it is their major diversion from work for seven months a year. For others, it is a matter of personal pride when their favorite team wins. For still others, baseball takes on the elements of a secular religion.

Only one club can win it all each year, but, as the calendar turns, all teams start fresh without a lost game on their records. For those who find baseball an enjoyable way to spend a few hours, it really doesn’t matter whether one player is better than another. It only matters that the game is played, the beer is cold, and our home team wins.