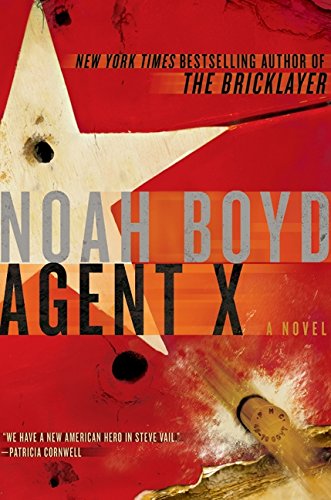 Anyone who thought Noah Boyd’s first novel, The Bricklayer, was a fluke, has yet to read the follow up to that first thriller. Agent X is prima facie evidence that Boyd is the “real deal.” His protagonist, former FBI Agent Steve Vail, returns in the second novel with his patented, rebellious, in your face, tenacious style of investigation.

Vail hits the ground running in the first chapter of this new thriller and never slows down. He maintains a blistering pace that will have readers exhausted by the time they finish the book. Steve Vail is a hard nosed, blue-collar guy from Chicago. He tried his hand at being a conformist, but the myriad rules and procedures facing him as an FBI Agent were more than he cared to endure. Although a highly successful investigator, Vail felt constrained by policy and bosses who held the reigns much too tightly.

In Agent X, we see a bit more of Vail’s character revealed, particularly his relationship with his father. A bricklayer by trade, Vail’s dad inculcated in his son a no-nonsense, work hard, no play ethic that made a huge impression on him. Wanting to please his father, Steve Vail naturally took on the trade. He became successful, despite the fact that his father withheld his praise. Vail desperately needed that from him, but it was not to be. Vail’s demeanor and attitude belie the fact that he is also a talented artist. A sculptor in his spare time, he creates works of art for his own enjoyment only. He’s afraid to allow anyone else to view them lest they criticize his work—a reminder of his days working with his father.

As readers may recall from The Bricklayer, Vail was recruited by the Director of the FBI to solve an enigmatic case involving extortion and murder. He was joined in that effort by Deputy Assistant Director Kate Bannon. Together, they brought several major investigations to successful conclusions. As Agent X begins, we find Vail visiting his old paramour and colleague, Kate, in Washington, D.C., on New Year’s Eve. Soon after he arrives, he unofficially inserts himself into a missing child case and recovers not only the boy from the kidnapper, but finds also another child who has been missing for years.

His quick decisive work catches the eye of the FBI Director, who summons Vail to his office and makes an offer Vail can’t refuse. The Director knows that Vail loves a challenge, particularly one that will necessitate his type of unorthodox, unapproved, dogged style of investigation. So once again, Vail accepts the FBI credentials and quickly immerses himself and Kate into a complex web of domestic spying. Just when you thought Vail had things wrapped up, another lead emerges that takes them deeper into the rat hole of international espionage.

The real highlight of this thriller is Vail and Kate matching wits with the Russian SVR, formerly the KGB. The action is nonstop and features gun battles, explosions, burglaries, car chases, and of course, too many dead bodies to keep track of. Throughout the story, the author educates the reader regarding the art of spying—including dead drops, spy dust, and codes—just to name several methods still employed by agents from foreign nations intent on stealing our technology. An interesting, engaging read, Agent X offers a glimpse of how complicated the whole spy issue is, as well as the political ramifications it causes.

Boyd’s work is solid. You won’t find any holes or unanswered questions in his books. They’re filled with plot twists and conundrums that will keep readers on their toes, wondering what’s next. His use of Bureau terminology and investigative techniques is authentic, not contrived. Moreover, when our hero must resort to firearms and other law enforcement accoutrements, they’re all spot on.

As was the case in his first book, The Bricklayer, Boyd’s disdain for management is thematic. He creates a couple of Bureau supervisors in Agent X that help the reader understand Vail’s contempt for “the suits.” The constant friction created by the inability of Vail to get along with his superiors is key to the conflict. It not only causes more suspense and intrigue, but also makes him seem more human, even more likable.

I enjoyed reading Agent X. My sense is that Steve Vail is a character who has yet to be fully developed. And as Noah Boyd continues to flesh out more of Steve Vail, the man, I foresee a long series of thrillers in which Vail continues to confound his FBI handlers, most of which include a love-hate relationship with this over the top investigator. My advice: Don’t miss out on the chance to discover the identity of Agent X.