The Age of Light: A Novel 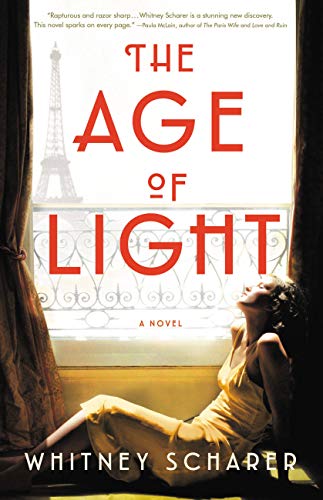 “Lyrical, sensual, raw, and heartbreaking, The Age of Light is Scharer’s own masterful portrait of a woman driven by longings, whose passions verge on demons, who thinks it might be safer to live behind the lens but in the end discovers that it isn’t.”

In The Age of Light, author Whitney Scharer’s hypnotic prose seams together a profoundly absorbing, atmospheric novel about real-life Lee Miller and her drive to make art instead of being made into it. Restless and dissatisfied, her journey begins when Lee abandons a successful career as an American model for Vogue and ventures into the unknowns of Paris in 1929.

Lee intends to be a painter, though as she boards the steamer for France her father surprises her by pushing a camera into her hands. The camera is a reminder of an uncomfortable past when Lee posed for him as a girl. Yet for Lee the camera is also a physical touchstone, a tangible symbol of the dream of creating something beyond herself.

Her first weeks in Paris are crushingly solitary. She knows no one. She has little money but refuses to go back to modeling. Her only paying work, sketching copies of the fashions at the Louvre for Vogue, is rejected.

Used to being noticed, she finds that in Paris she is just “another pretty detail in a city where almost everything is artfully arranged . . . where petits fours gleam in a patisserie’s window, too flawless to eat . . . where a milliner displays exquisitely elaborate hats, with no clear indications of how one would wear them.”

She tells herself she’s glad not to be noticed, but loneliness gnaws at her. At a restaurant she lingers, drinking too much wine, dreading the idea of going back to her hotel room because “her loneliness has gained heft and power: it has contours now, almost a physical shape, and she imagines it sitting in the corner of her room, waiting for her, a sucking, spongy thing.”

Then a trio of Americans sweep into the bistro, odd, strangely dressed, talking of the Ballet Russes. They draw Lee in and carry her along to an apartment in Montmartre that isn’t what it seems. Plain on the outside, the inside is opulent, with unusual characters in silk robes scattered about.

When a gilded bookshelf mysteriously opens into a large room Lee feels as if she’s “stepped out of Paris and into a Bedouin camp.” She’s stumbled upon the world of the Surrealists, of opium and addicts, artists and the avant garde, and a brief, chance encounter with the photographer Man Ray.

But the moment passes, as do the weeks. Her desire to paint fades. Increasingly, she sees the world as if she were behind a lens and decides she prefers “the world boxed up, contained inside the camera’s frame.”

Gathering courage as she runs low on money, she seeks out Man Ray. She’s determined to convince him to take her on as a student. All she wants is to be a photographer, a need that now consumes her.

Man Ray, consumed by his own art, is hesitant. Reluctantly, he hires Lee as an assistant. She knows how to make herself useful, more than useful, and their relationship deepens. He becomes her teacher. She becomes his muse. He brings her into his world of artists, and in a literary salon enigmatic writer Claude Cahun puts to words Lee’s internal longing to “only ever travel in the prow of myself.”

Soon Lee and Man Ray are lovers. Lee “wonders how she ever thought this might not happen . . . it feels inevitable,” bodies, art, colliding—until the muse becomes an artist too and betrayal changes everything.

Interspersed throughout the novel are “snapshots” of Lee’s later life. There is Lee in the 1960s in England attempting (badly) to live a normal life and give a dinner party. There is Lee in the 1940s, a war photographer in Buchenwald, Normandy, and Saint-Malo where the horrors of war refuse to stay contained in the frame, and Lee finds she can’t “shut off the pictures, the endless film loop of her brain.”

Lyrical, sensual, raw, and heartbreaking, The Age of Light is Scharer’s own masterful portrait of a woman driven by longings, whose passions verge on demons, who thinks it might be safer to live behind the lens but in the end discovers that it isn’t.