The Age of Edison: Electric Light and the Invention of Modern America 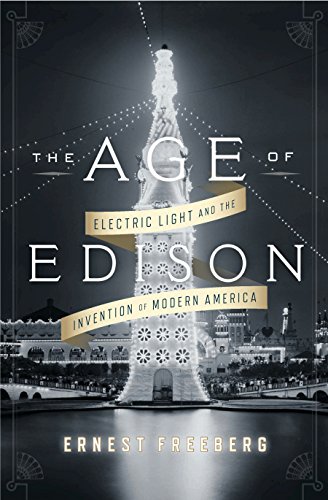 “Ernest Freeberg paints a vivid portrait of the hunger for and rewards of creativity.”

Before the advent of electricity to light and power places, darkness was the obstacle to human happiness.

It was only in the early 19th century that gas light became pervasive, and in the early 20th century that electric lights became more prevalent, so that with the flip of a switch, interiors could be bathed in warm, brilliant light. The most recent advances in electricity have made possible contemporary communications and computational power.

The Age of Edison is the fascinating story of technological inspiration that transformed society; marked the competitive advantages of a once primitive place—the United States of America—over Europe; and created a culture of innovation that has continued to drive the country’s economic progress and global leadership.

Ernest Freeberg asserts that “The introduction of electric light changed Americans’ relationships to the natural world, shaping the rhythm of their days and transforming their culture . . . strong, clean light made cities safer and workers more productive and happy, while encouraging a nightlife of stimulating scalability that country folk can only read about under their smoky kerosene lamps.

“In short, the electric light intensified the pace of city life in the late 19th century, contributed to the area’s rapid expansion of industrial production and consumer culture, and helped create urban America’s new mass market for entertainment. In the process, the new light stimulated countless innovations, new machines, new ways of living, which were greeted by men and women who were both eager and ambivalent—just as we are today when we encounter the newest technology.”

As electricity was developed, the critical technological competition was not between specific indoor or outdoor lighting applications, but between electrical lighting systems.

Significantly, in 1882, early on in the process of introducing electrical systems, Thomas Edison concentrated his dynamo system in lower Manhattan, targeted because of the presence of both powerful financial institutions and newspapers, believed to provide the benefit of promoting these innovations.

Here, Edison shrewdly applied his marketing and promotional acumen. While some competitors had asserted he was more showman than scientist, he epitomized first mover advantage through promotional flair, dominating the media, attracting attention, and in the process crowding out competitors. In so doing, he gained critical financial support to fund his most precious resource: intensive inventing.

Initially, large arc lights mounted on towers lit large external areas, while lightbulbs brightened interiors. A significant advance beyond individual lighting was the lighting system, arguably Thomas Edison’s greatest innovation, to “create a complete lighting system that linked his powerful more efficient dynamo through a central main, feeders, switches, to an incandescent bulb with superior design. His system delivered a steady stream of current to hundreds of lights, enduring distances from the social power and used parallel circuits to maintain the current . . . could be distributed some distance from a central station, a system with the potential to become large and economical enough to challenge the gas companies.”

While other inventors showed, “that they could light a house; Edison was well on his way to lighting an entire city neighborhood.”

To the popular mind “the Edison legend is irresistible . . . the public like to think of inventors as solitary geniuses and folk heroes. But the people most invested in America’s Industrial Revolution generally recognize that invention is a complex social process that can be encouraged or stifled by public policy. Accordingly, legislators, scholars and educators investigated the springs of technological ingenuity, hoping to understand more about how it was done.”

As electricity advanced, there was notable competition between Europe and the United States. “Europeans often conceded that Americans displayed a remarkable aptitude for invention, particularly in the field of labor-saving devices . . . while the young nation was still far removed from the European capitals of higher learning, America had become a leader in technological innovation in a number of fields in the most enthusiastic marketplace for all new technologies, from powerful labor-saving industrial processes through time-saving household gadgets.” Importantly, this distinctive inventiveness “had become a defining national trait.”

Some perceive this U.S. inventiveness was a byproduct of the chronic labor shortage; American housewives possibly lacking Europe’s ready access to cheap domestic help; and the nation’s more democratized educational system, such that “American workers had the literary skills to take advantage of a growing popular literature on science and technology, at least the rudiments of practical math.”

What was the secret to American inventiveness? Thomas Edison asserted that inventiveness involved, “Hard work, stick-to-itiveness and common sense;” reading very widely; “vast patience and logical deduction;” and conducting an unlimited number of experiments, while making careful calculations concerning them. And, he suggested that the English were at a disadvantage to their Americans counterparts, because “the British did not eat enough pie.”

More about the times than the person, The Age of Edison is an important illumination of the invention that is today taken for granted but has enabled the advent of Internet communications and the information society.

The lessons learned from the invention of the electric light are highly relevant to all concerned with policy, technology, and entrepreneurism. In telling this story, Ernest Freeberg paints a vivid portrait of the hunger for and rewards of creativity.