Age of Anger: A History of the Present 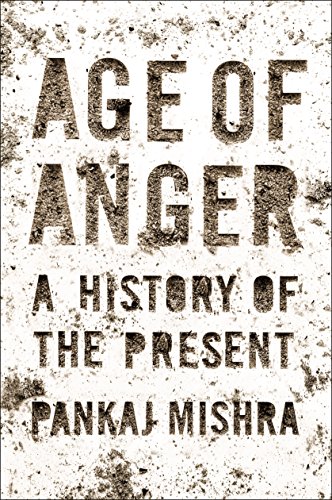 What are the forces at play behind the referendum for Brexit, the election of Donald Trump, the rise of political extremism and polarization, and the outbursts of violence we see in the world today? In Age of Anger: A History of the Present, author Pankaj Mishra searches through the minefield of modernity to find the answers.

Mishra shows that the nationalistic, populist, and xenophobic undercurrents of today’s politics are driven largely by ressentiment, a term from Kierkegaard and explored in depth later by Nietzsche. Ressentiment is simply a word for a combination of anger, envy, and a sense of inferiority—a smoldering form of resentment, really. What drives these emotions of anger and negativity, as Mishra notes, are the gleaming, false promises of global capitalism, which have gone unfulfilled for the majority of the world’s population, and the related uprooting of traditional modes of life, leaving many spiritually and physically unmoored in an unfamiliar world.

Despite the well-told story of liberal democracy as the greatest economic system ever invented, Mishra documents how the ideals of democracy, increasing material affluence, and progress have been unevenly shared around the globe. Many millions of peoples’ lives have worsened from the expansion of globalization and technological advancements.

As Mishra deftly weaves between obscure Eastern European novels, French philosophers, and even Dostoevsky’s prophetic Notes from Underground, he exposes the modern myth of a new era of expanding material possessions and intellectual, work-related, and cultural advancement as a false promise, sold to us by our financial masters and politicians.

As our economic elites and technocrats gained money and power, the general population has been missing out on the benefits of modernizations for centuries. Building up underneath the surface of society is an immense anger, fueled by a permanent, structural underclass dealing with broken dreams and lowered expectations for a better life and future.

Mishra explains the similarities between the drives of many of today’s Islamist terrorists, contemporary hate groups, Hindu supremacists, and lone-wolf attackers, with past killers such as Russian nihilists, the Italian fascists, and the Nazis, and the anarchist violence of the late 19th century. All these examples consist of groups of people united due to an intense frustration regarding their economic and cultural situations, whose answer was, and is still for many, to immorally dehumanize and commit violence against people with different ethnic, social, and religious backgrounds.

In modern times, these emotions are directed at our economic and political elites, thus the backlash and the support for demagogues and neo-fascists around the world, such as Turkey’s Erdogan and India’s Modi. In the West, Mishra explains, we have lighter versions, but still, overall populist/authoritarian-type leadership, with Trump, May, and National Front candidate Le Pen in France, among others.

For Mishra, today’s debate between the populist, bigoted nationalists and the privileged, cosmopolitan globalist elite mirrors the war of ideology between Jean Jacques Rousseau and Voltaire in the 18th century. Rousseau instinctively distrusted the siren songs of the global capitalists, and in Paris he got to see up close the contrasts between a pampered and spoiled elite and the entrenched misery of the poor and working classes.

Voltaire, on the other hand, profited immensely from his private businesses and defended the stock markets as rational and scientific, providing intellectual heft to the mendacious field of economics and liberal, pro-capitalist ideology. Voltaire’s slavish and unflinching support for Russia’s Catherine the Great was further evidence for Rousseau of the financial elite’s ideological blinders, and foresaw the confluence of capitalism and bloody authoritarian leadership that we are dealing with to this day.

Living in an age of diminishing expectations leads the disaffected, dispossessed, and disenchanted toward irrational outbursts of violence, affecting fundamentalists of all religious persuasions. Whether writing about Hindu nationalists or Timothy McVeigh, Mishra explains how:

“Two phenomena much noted in nineteenth-century European society – anomie, or the malaise of the free-floating individual who is only loosely attached to surrounding social norms, and anarchist violence – are now strikingly widespread.”

Mishra’s book is a roller-coaster ride, and well worth the time spent. Mishra is extremely well read, and readers may find some references dizzying and overwrought, while others may find them fascinating and erudite. There are a few slow spots discussing esoteric European novels, but Mishra’s talent for storytelling pushes the reader through fairly easily.

The low point occurs at the end of the book. Mishra does clarify quite well that the rest of the world can only be expected to go through the birth pangs that Western Europe and the U.S. has had to go through to arrive in the “modern world.” However, he does little to explain how today’s anger and resentment are all that different from past centuries and millennia of violence, hatred, and racism. Hasn’t civilization always faced such barbaric and bloody conflicts between the haves and the have-not’s?

Mishra’s critique is extensive and systematic, yet not overly revelatory. Many people instinctively understand that today’s populist leaders are driven by the masses’ wish for a return to authoritarianism, religious fundamentalist dogma, and racist ideology.

In Age of Anger, Mishra leaves us with the impression that rising powers such as India and China are doomed to follow in the West’s footprints. Yet sociocultural dynamics are never so monolithic as to create a destiny for developing nations to exactly follow. There is a possibility that poorer, emerging countries can avoid the rising tides of intolerance and cruelty that the West has stoked.

Mishra, toward the very end, does note that:

“We need to examine our own role in the culture stokes unappeasable vanity and shallow narcissism. We not only need to interpret, in order to make the future less grim, a world bereft of moral certitudes and metaphysical guarantees. Above all, we need to reflect more penetratingly on our complicity in everyday forms of violence and dispossession, and our callousness before the spectacle of suffering.”

Yet one wishes he would expand more on this, and offer more detailed guidance and solutions to these issues. Mishra gives no blueprint for social change and no message for hope, regarding:

“the great chasm . . . between an elite that seizes modernity’s choicest fruits while disdaining older truths and uprooted masses, who, on finding themselves cheated of the same fruits, recoil into cultural supremacism, populism, and rancorous brutality.”

While Mishra offers an excellent critique of liberal democracy’s inconsistencies and unequal nature, as well as providing a magnificent backdrop for understanding the currents of rage in modern society, one is left wishing for more practical advice and specific answers to help build a better future.