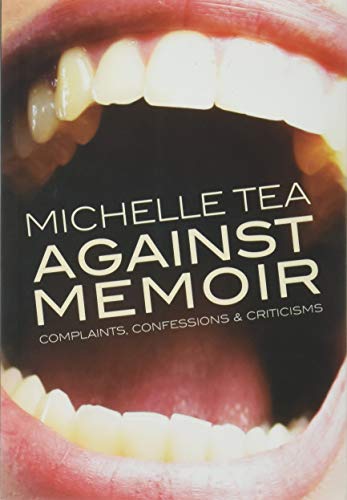 Michelle Tea’s publisher, the Feminist Press, calls her a “queer countercultural icon.” She is that, indeed, and has been an icon in the queer world for decades. A novelist, a memoirist, the co-creator of Sister Spit, the all-women’s performance tour, and the curator of Amethyst Editions at the Feminist Press, she is a veritable literary institution in queer, in feminist, and in countercultural circles.

In the publicity photo from the Feminist Press, Tea—with her big smile, long hair and large eyeglasses—looks like the girl next door. Her tattoos are also visible, though these days, girls next door have tattoos and body piercing galore.

Born Michelle Tomasik in 1971, she never went to college, and as she explains in a 2004 interview with Rachel Kramer Bussel, “I didn’t get the connections that a person gets in college and I didn’t come into publishing in that way, like I didn’t get an agent and I didn’t have my book shopped around.”

Still, she got where she wanted to go and had help along the way from small pushing houses and from big name countercultural institutions like City Lights.

Against Memoir, which is her 15th book, is a collection of her essays, speeches and performances from the last 13 years, as well as some work, such as “Hags in Your Face,” never seen or heard before.  The earliest piece in this book, which is titled “Hard Times,” is from 2005. The most recent is from 2017. It’s the title essay, “Against Memoir.”

Against Memoir is an anti-memoir memoir. Going against something or somebody is part of Tea’s very nature, though she has plenty of company in the world of those who are anti.

Many of these pieces first appeared in xoJane. One is from The Believer and another from Harper’s that’s titled “Baba” and that describes her recovery from a C-section in a San Francisco hospital. All of the pieces pre-date the #MeToo Movement, that would have provided Tea with plenty of ammunition for at least one book, and maybe many more.

Still, from 2005 to 2017 she found heaps of sexism, racism, homophobia, misogyny, violence, drug addiction, and both outrageous and just plain bad behavior to pique her ire, inspire her, and prompt her to write. The essays in Against Memoir are far ranging thematically and geographically, though the voice is the same all the way through.

Tea writes about the movie, Times Square, the pop artist, Andy Warhol, and about Valerie Solanas, the author of the SCUM Manifesto (1967) who tried to murder Warhol and who served time at Matteawan State Hospital for the Criminally Insane and the New York State Prison for Women. Solanas died in San Francisco in 1988.

In the essay on Warhol’s would-be assassin, Tea writes, “There is no way for me to talk about Valerie Solanas without talking about . . . the trauma I experienced as a female sensitive to misogyny in this world.” She might have said much the same in all the essays ands talks in the book.

Tea can’t write about anything or anyone without also writing about herself. In the essay titled “Purple Rain” in which she explores her feelings about Prince, his music, his albums and his identity, she also writes about “stimulating” her own “genitals” though her preferred vocabulary is a lot more graphic and slangy.

You don’t have to look very far to find four-letter words in Against Memoir. One essay is titled, “How to Not Be a Queer Douchebag.”

Sometimes the four-letter words are appropriate and sometimes they’re extraneous. “Cursing,” as it’s often called, doesn’t always add to the heft of the essays.

Sometimes, too, Tea can be just plain superficial as for example when she ends her essay about Sonic Youth, cool kids and Gothic culture, with the sentence, “Music is magic.”

Though the author was born in Chelsea, Massachusetts, and now lives in Los Angeles, the city that shaped her irrevocably was San Francisco, which she describes as a place “where you can make a career out of all your unhealed triggers.” Notice that Tea doesn’t say “unhealed scars.”

Most everything in her life that hasn’t healed has also provided her with an abundance of material to write about and thereby to become a voice for others who have been scared, and have felt marginalized, abused, misused and trivialized.

With all of her being, Tea has tapped in the vast reservoir of American life and culture in which people are robbed of their identities and denied their essential humanness.

Out of that reservoir she has made art that’s not just or only for queers and gays and for people who don't know what sex and gender they are.

Michelle Tea is a child of the punk universe, working class culture, and an American original. Accept her challenge and read her if you dare. You’ll find her furious and funny as in the essay, “Pigeon Manifesto” that begins “The revolution will not begin in your backyard because you do not have a backyard.”

If you don’t have a backyard, or a front yard, either, and if your world is “a patch of concrete, a splotch of weedy grass,” as Tea puts it, then this book is for you.

If you live in a big house with a lawn, or a penthouse with a view, Against Memoir will transport you into a strange and wonderful world that’s worth exploring.