Aftertaste: A Novel in Five Courses 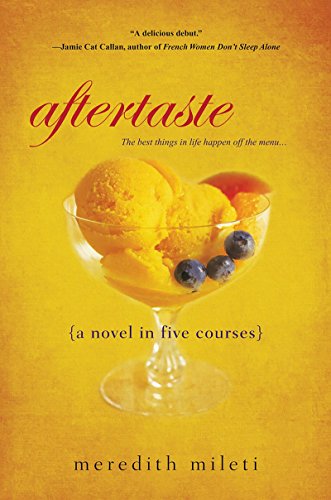 “In the end, Aftertaste is a great reminder to all of us that sometimes life can spin out of control, but by and large, with good ingredients, a set of sharp knives and a solid understanding of cooking techniques, we can at least control the outcome in our kitchens. Meredith Mileti’s debut novel is as thoughtful and poignant as it is wickedly funny. It is one to savor—recipes included.”

Many of us know someone (maybe even ourselves) who at a certain point in his or her life has consciously stopped and thought, “I am in a good place right now. My marriage is good, my children are doing well, my career is flourishing,” only to have it all unravel almost as soon as those thoughts are formed. Someone suddenly dies or becomes gravely ill, a job is lost, or, as happens in Aftertaste, a marriage is betrayed through infidelity and the spouse never saw it coming.

There is no end to men (and women, for that matter) behaving badly, but for all of you who have known a cad who has betrayed wife and family, Meredith Mileti’s debut novel serves up a satisfying and delicious story of rebuilding a life after everything is suddenly and cruelly taken away.

Laced with plenty of irony, Aftertaste is narrated by Mira Rinaldi who, along with her husband, Jake, is a chef and co-owner of a critically acclaimed New York Italian restaurant called Grappa. Soon after the birth of their first child, Mira walks in on her husband having sex with the maîtress d’ at the restaurant. Mira’s fury is so intense she pounces on Nicola, and when her husband tries to remove her, she hangs on to Nicola’s hair so hard that she ends up pulling her hair out, leaving Nicola with a bleeding scalp and landing Mira in a court ordered anger management course.

Wait, Jake is the unfaithful spouse, and Mira is the one being punished? No one ever said life was fair. The scenes with Mira participating in the anger management class at the Manhattan County Courthouse are full of mordant dark humor.

Mira attends her classes where she is instructed by a clinical social worker to “breathe in the clean, white air. When you exhale, picture your breath as black and hot. It is your anger. Release it, and let it go.” Meanwhile, 80 blocks up town you can just imagine someone similar to Mira sitting in her Upper West Side therapist’s office being encouraged to do exactly the opposite, to get in touch with her anger.

Ms. Mileti, a self-described cooking and dining enthusiast (who is also a developmental psychologist) has shaped this novel around a five-course Italian meal: Antipasti, Primi, Secondi, Contorni, and Dolce. The Kübler-Ross five stages of grief have now been re-cast as a meal—it may be a tad trite, but so what, it is so much more enjoyable to eat than to grieve.

The first two sections of the book are set in New York, but after losing the restaurant in her divorce settlement Mira moves back to Pittsburgh, her childhood home. Like the difference between New York and Pittsburgh themselves, the New York narrative is so much more intense. In New York, Mira is dealing with raw emotions, once in Pittsburgh, both Mira and the pace of the book slow down.

Nevertheless, this is a keenly observed novel that is, in part, a comedy of manners with several stock (but endearing) characters like the middle-aged gay friend who owns an antique store, the fortysomething lovelorn single Jewish woman who adopts a child, and the seemingly dumb blond who is dating Mira’s widowed father who ends up being the wisest of them all, to name but three. Like the supporting characters in a Jane Austen novel, they all have a role to play in helping Mira grow and move forward.

Cooking also plays an important supporting role both literally and figuratively. Mira is a chef, after all, and cooking is what she does. When the going gets tough, Mira gets cooking. There are scores of wonderful scenes of Mira either cooking up a storm or eating her way through Pittsburgh from the perfect biscotti at Bruno’s Bakery, to Italian sausages and cheese from The Pennsylvania Macaroni Factory to oversized sandwiches at Primanti Brothers (it’s enough to make you want to hop on the next plane to Pittsburgh).

Toward the end of the book, Mira contemplates the role that cooking plays in her own sense of happiness:

“The great gourmand, Auguste Escoffier, once said, ‘Good cooking is the essence of true happiness.’ Did he mean that happiness is to be found in the act of cooking? Or in the appreciation of the result? . . . Maybe what Escoffier meant was that true happiness is to be found in one’s ability to satisfy a basic human need so spectacularly. Those of us content to take our happiness secondhand cook because what we want, what we crave, is to be needed. Nurturers extraordinaire, brokers of comfort, we hope to turn the tables on our own needs by filling the stomachs and souls of the world.”

Maybe. Or maybe cooking is the one thing in her life Mira can control. In the end, Aftertaste is a great reminder to all of us that sometimes life can spin out of control, but by and large, with good ingredients, a set of sharp knives and a solid understanding of cooking techniques, we can at least control the outcome in our kitchens.

Meredith Mileti’s debut novel is as thoughtful and poignant as it is wickedly funny. It is one to savor—recipes included.