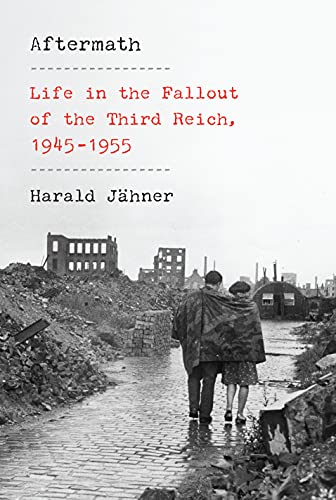 “This is an important addition to the library of Holocaust literature, but it should be read with other historical post-war texts that examine the perpetrators of the Holocaust more deeply.”

By now, dozens of experts have analyzed the overarching ethical, political, and historical implications of the way postwar Germany confronted, and failed to confront, its role in the Holocaust.

In his first book, veteran German journalist Harald Jahner takes a more original approach: He describes, in rich detail, daily life in Germany during the decade immediately after World War II, from the rubble on the streets, to abstract art in the museums, to sex.

Only in the last couple of chapters does Jahner home in on his countrymen’s refusal to acknowledge their collective role in the rise of Hitler. For most of its 416 pages, Aftermath could be about almost any vanquished nation in the industrial era.

The details are the book’s strength, but the lack of context is its weakness.

Germans “managed to rid themselves of the mentality that had made the Nazi regime possible,” Jahner contends, in large part because of the very cultural and humdrum factors he focuses on: “the attraction of more relaxed ways of living as embodied by the Allies, the bitter education of the black market, the struggles to integrate the expellees from the eastern territories, the spectacular arguments about abstract art, the pleasure in new design.”

Aftermath, which won the Leipzig Book Fair Prize when it was first published in German in 2019, is full of pinpoint snapshots. With cities in ruins, people “simply lay down just off the road, often in basement doorways or under bridges.” Returning soldiers showed up at their family homes, “barely recognizable, scruffy, emaciated and hobbling . . . Eyes stared out of dark hollows from which all delight in life seemed to have vanished. The shaven skulls and sunken cheeks intensified the impression of one half-dead. Most children stoutly refused to sit on the knee of a ghost.”

Gone with the Wind and Chaplin’s The Gold Rush—but not, obviously, The Great Dictator—were among the most popular movies that the US Occupation brought.

However, the book sorely needs a clearer structure and thematic statement. Most of the chapters spotlight a specific topic—housing, migration, the economy, sex, art—but Jahner doesn’t put it all together until the end. Even worse, the occasional references to the genocide against the Jews or ex-Nazi officials who worm their way into respectability are so casually dropped in, then forgotten, that the book seems as unforgivably callous as the postwar German mentality it eventually criticizes.

This is an important addition to the library of Holocaust literature, but it should be read with other historical post-war texts that examine the perpetrators of the Holocaust more deeply.