After We Were Stolen: A Novel 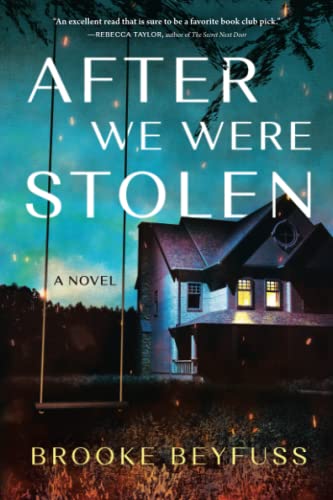 Nineteen-year-old Avery helps her mother give birth to a baby boy who dies within ten minutes. While her female siblings care for their mother, Avery is given the task of burying the child. This household of 12—ten children and mom and dad exist highly secluded on the property of the Clovelite factory.

Avery's grandfather and 20 followers established this survivalist community, totally sheltered from society. Grandfather prepared his "family" to be self-sufficient, living off the land and be equipped for the end of time. Everyone lived by his rules, but when he passes away, Father takes over, and life becomes more regimented.

Father chooses all the members of their clan, and "Once my father stepped in, everything changed. He didn't see things the way my grandfather had, he didn't trust people from the outside, and in his eyes, if you hadn't been chosen by my father, you weren't chosen at all. My father didn't banish them [the others] to the outside—we were all well-hidden, so it was too much of a risk. They were no less bound by the perimeter than we were. But the adults who remained on the compound had far more rules to live by, firmer boundaries to mind. And if they crossed those lines, there were no second chances. They killed themselves, or my father took care of them, one at a time until, as he told us, his house was clean."

Each of the children, ranging from age 24 down, had responsibilities to perform, or they would face dire consequences. Fully independent, the residents raised their own produce and cattle for food, never needing to leave their area.

After Avery commits a transgression, Father banishes her to the field where she lives in a tent, keeps warm by making fires, and eats fruits and vegetables she gathers for everyone. Isolated and shunned by her parents and siblings, the only companionship she has is her 16-year-old sibling Cole. The two share an absolute bond, and though this is disobedience on Cole's part, nothing stops him from seeing Avery. Discipline and hard work are drummed into everyone.

When Avery is given the chore of burying her baby brother, Cole assists her, so she won't be alone. They dig a grave in a remote section of the farm, and Avery wraps the child and buries him in a wood box. This event rattles her, for no one is allowed to mention this death, which eats away at her. But this is their way of life, and she knows nothing different, her existence of separation from the others causes depression and a sense of hopelessness.

Father decides to enlarge the family, so he and Mother bring Avery into the house for a talk. She is told she will have one of her sister's bedrooms—the best in the house, and she is to take a week to rest and eat plenty of nutritious food.

Father informs her: "'. . . It took your grandfather's group years to create what we have. They had more people, more experience. We are only twelve.' . . .

. . . "'But there are things we can do to change that,' he went one, 'without weakening ourselves with strangers'

"The longer he talked, the less I understood. 'I don't—'

"'And your mother and I think,' he said, with a small smile in my mother's direction, 'that you can help."

As a virgin, he is sure he will have no problem finding a willing participant. His definition of helping the family is electing her to be the bearer of more children. Though Avery wants no part of this, she has no choice, and she is drugged before the act, not knowing what is happening until the following day when she awakes bleeding and in pain. Is this something she must endure to be accepted by the family, especially Father?

Avery is allowed to remain in the house. When a fire rages in the compound, her only chance of survival is to jump from a second-story window. As everything around her explodes, she searches for Cole and sees one of her sisters is sprawled on the ground, deceased. Not caring about the others, she locates Cole, insisting they leave the property immediately.

With no money, food, and only the clothes on their backs, they start their trek to get far away. They sleep in Avery's tent in the woods at night, pick through Dumpsters for disposed of groceries for sustenance, and even take part in shoplifting to survive. But they are caught when Cole steals from a pharmacy. Taken to the police station, they are interrogated. Because they have been raised strictly by Father's rules, they cannot answer the detective's questions, so they are placed in cells as the detectives dig for more information about them.

As it turns out, the so-called siblings had been kidnapped as babies and are not biologically related. Cole's parents are ecstatic when they learn the son they lost 15 years ago has been found and returned to them. Still, Avery's single mom cannot be located, so she is sent to live in what would be considered a halfway house.

Avery is terrified, unaware of the "family" members who survived beside them, and now is distraught about losing Cole. With sadness and guilt, she tries to piece her life together, but is there any chance for normalcy? How can she go on?

A debut, this heartbreaking novel depicts a young woman's resilience amid abuse and a life of lies. Avery's voice resonates throughout as she tells the story of her life and the horrors she has had to deal with and try to overcome. Powerful and moving, this book makes us wonder who started the fire able to give Avery and Cole a new lease on life. Filled with bewilderment and highly expressive, the conclusion is surprising yet fully realized.